I don't like to pay attention when I run. Don't get me wrong, I pay attention to the essentials, like where exactly I'm going and when to turn around to get home in time to shower before work.

But I'm not one of those runners who can solve big problems while running. I don't return home, sweaty and satisfied, suddenly knowing the answers to the big questions. Most of the time, I don't even remember what I thought about, other than when to skip a song on my playlist.

I knew I was in good company when I read What I Talk About When I Talk About Running by Haruki Murakami. "I'm often asked what I think about as I run," he wrote. "Usually the people who ask this have never run long distances themselves. I always ponder the question. What exactly do I think about when I'm running? I don't have a clue."

But as any runner with any kind of specific and measurable goals know -- whether the goal is running just another minute without stopping or shaving minutes off a marathon time -- sometimes we have to pay attention. And not just to our watches, but to our bodies, and how they efficiently, naturally and painlessly (or vice versa!) they move.

I recently had the opportunity to visit the Running Performance Program at New York University's Langone Medical Center to learn more about how my body does just that, and I learned more about the parts of my running that I haven't been paying attention to than I ever could have imagined.

The Running Performance Program experts -- physical therapists, exercise physiologists, registered dietitians -- assess all aspects of running from all angles, aiming to make everyone from running newbies to Olympic hopefuls a healthier, more efficient runner. They provide personalized recommendations, whether it's for regular visits to physical therapy, custom orthotics or a simple at-home strengthening program and some running drill homework.

The RPP space is equipped with all the latest gear and gadgets -- it's a fully-functioning rehab gym, after all -- with floor to ceiling windows overlooking NYC's East River. After I stopped gaping at the view, I was outfitted with a whole bunch of stick-on sensors and given free reign on the treadmill. The team circled around me, capturing my running from front, back and side views, while I tried not to get too self-conscious. As they later explained, and as any runner inherently knows, the longer and harder you run, the more fatigued you get, and the more your form starts to falter. Just a few minutes certainly didn't expose all my flaws, but staying around a 10K pace helps to show them a good amount of the big picture. 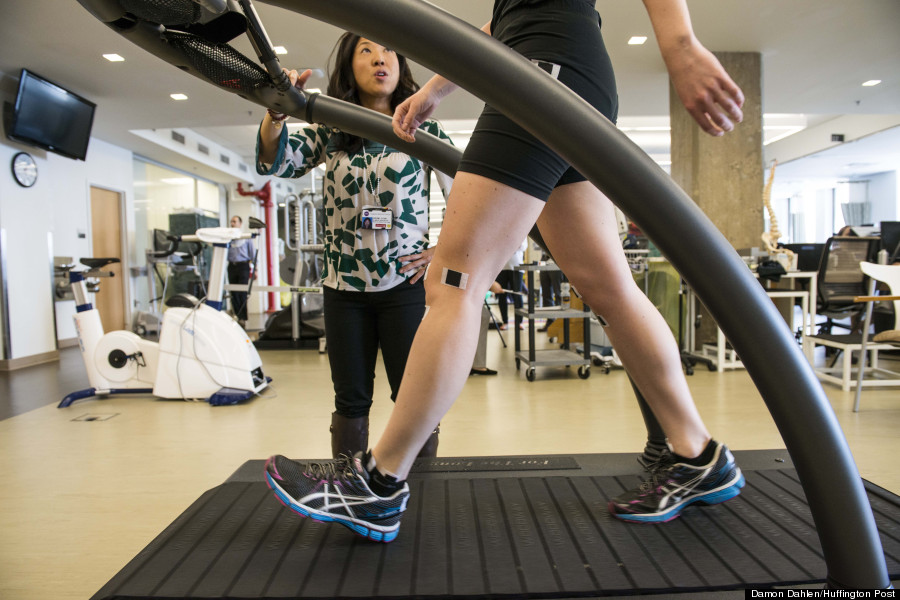 Physical therapist Hiromi Otani talks me through my warmup.

Next came a strength and flexibility assessment in the form of the Functional Movement Screen (FMS), a series of seven moves that expose the “asymmetries and imbalances” that make a runner most vulnerable to injury.

Next, I hopped up on a table for a foot and ankle assessment. The series of tests and measurements are meant to get into the nitty gritty of the mechanics of a runner's lower extremities and how they contribute to running performance. I still feel a little bad that physical therapist Wil Colon had to touch my sweaty feet.

RPP-goers will then typically have a nutrition evaluation, but I skipped this part in favor of spending more time with the entire team in a conference room they call the boardroom to discuss my results. It was during this meeting -- and while perusing my 24-page personalized report emailed to me after the fact -- that I discovered some surprising info about myself as a runner, and how much we can all stand to learn about how we run. Here are a few of the biggies I was ignoring. You might be, too.

1. Your Hips
I received a score of three out of three on a pushup-type test of core stability, but a measly one out of three on a test of core stability with a little rotation thrown in, a modification of my dear friend, the Bird Dog. To blame is most likely "decreased activation" of my core muscles, which boils down to having a strong core, but an unstable core, Peters told me. As we watched the video of my treadmill running in slo-mo (and if you've never seen yourself running from behind, this will be quite an experience), the team pointed out that my pelvis drops about 10 degrees on each side. In normal, healthy runners, the pelvis drops around five to seven degrees, they wrote in my report. An increased drop in the hips could put runners at risk for pesky injuries, including IT band syndrome and hamstring strains.

2. Arm Swing
Even though I don't feel off balance when those hips drop, apparently I course-correct by splaying my arms out to the sides. Okay, it's not all that dramatic, but normal arm swing should be in what's called a "hand to pocket" position, and I look like I've got wings. The longer the distance of a run, the more energy is expended holding the arms up and out, so it's to everyone's benefit to keep a more streamlined, speedier posture.

3. How Quickly You Pronate
Most runners have heard of pronation and supination of the feet -- the inward and outward motion of those bad boys -- in the context of choosing a supportive running sneaker to avoid overuse injuries. Some amount of pronation and supination of the feet is normal, but it turns out you don't want to rush this process, either. The pros found that, at least in my right foot, I pronate too quickly, and they recommended a strengthening exercise for my arches. Who knew? 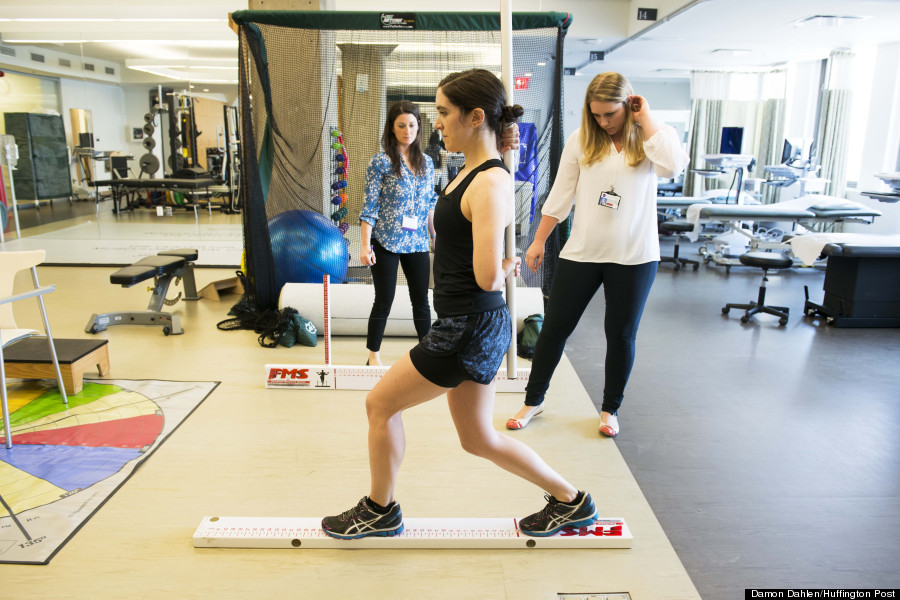 Peters awarded me a perfect score on this inline lunge test.

4. Foot Placement
There's a whole lot of talk about foot strike, that is, the part of the foot that hits the ground first, and what that means about running and risk for injuries like IT band syndrome and knee pain.

But another important part of a safe and efficient running stride is how far away that foot is from your body when it first makes contact. Close to your center of mass (COM), and you're in the clear. Too far from it, and you're over-striding, which is not only harder (and therefore inefficient) but could also lead to injuries, Runner's World reported.

You also don't want your foot to cross over the midline of your COM. Imagine running along the yellow line in the middle of a car-free road. Ideally, if you're running at your most efficient, no more than 25 percent of the width of your heel would cross over that yellow line, according to my report.

Peters looks on as I complete a hurdle step test.

5. How Many Steps You Take A Minute
This is what's known as cadence, and it doesn't reflect your overall running pace so much as the quickness of your steps. Evidence suggests that a cadence of about 180 steps a minute or above is ideal. Fewer than that (like my 168) means there's more force on the body at the time of impact with the road or treadmill or track, which could lead to knee pain. Taking more steps could also help limit over-striding, Runner's World reported.

6. Your Vertical Displacement
Allow me to get a little science-y for a moment: If your goal is to cover as much ground as you can in as little time as possible, you want the bulk of the energy you are expending to propel you forward. It makes sense, then, that any energy spent moving you upward is basically wasted.

The pros call this "vertical displacement", and ideally it should stay below about 8 centimeters. The team highlighted the tops of my ears at the lowest and highest points in my stride and clocked the difference at about 12 centimeters. Luckily, there's a relatively easy fix -- at least in theory -- that any runner can practice: Focus on pushing forward with the glutes, rather than lifting up with the hip flexors when you run, which is beneficial to those tight hip flexors anyway, if, like me, you spend the bulk of the day sitting.

7. Your Weight, In Relation To Your Sneakers
Most runners have probably heard the benchmark estimate that it's time to replace running shoes every 300 to 500 miles. But according to my report, that number changes depending on how much you weigh. Try using this handy equation: Divide 75,000 by your bodyweight in pounds. Then divide that number by the number of miles you run each week. Voila: The approximate number of weeks you can wear your sneaks before they lose all their protective value. 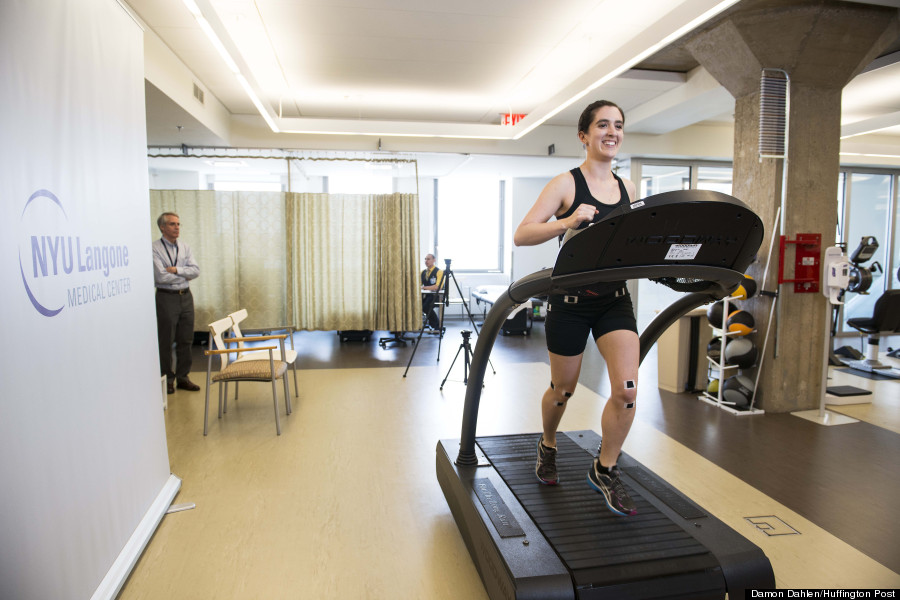 Here I am looking much happier than I have any business being, given how many things I just learned I do incorrectly when I run.

Obviously, every runner is different. You may already know every lesson I learned, or you may be interested in an entirely different set of running tricks and tactics. Which is why you might want to do an assessment of your own. Centers around the country are doing this kind of work, and Runner's World has a comprehensive list of similar services here.

If you're not up for shelling out the big bucks, the next time you're out for a run with a buddy, ask him or her to video a few of your strides with your smartphone, physical therapist Colleen Brough told me. Then, go back and "analyze" your own tape, looking for knees that drift inward, hips that drop or feet that excessively cross the midline of your body.

Maybe the most important lesson for a runner like me (who would honestly prefer to continue paying very little attention) is that there's so much more to learn when we do pay more attention. Really, just a little bit of care can make a big difference.

All photos by Damon Dahlen for The Huffington Post. For more from my visit to the NYU Running Performance Program, check out the slideshow below: