Perfection doesn't exist in the world of running. There are great runners, great venues, great weather, great competitors, and great races. There are no perfect days. The secret to running and racing is acceptance, perseverance and positivity.

We can run anywhere. Intervals don't have to be done on the track. Hills are made from treadmills, bridges, and piles of almond husks. To run, we only need the will to train and the space to move.

If the local track isn't available, move your workout to the open roads. Olympic marathoner and running legend, Meb Keflezighi does this intentionally. In his book, Meb for Mortals, he says "Doing interval workouts and tempo runs on a bike path or road better prepares me for my races." The imperfections of the road and trail are what make us stronger.

In preparation for the 1982 Boston Marathon, Dick Beardsley knew he needed to master Heartbreak Hill if he was going to defeat Alberto Salazar. He left the warmth of Georgia and flew to Boston, Massachusetts where he was greeted by an epic Nor'easter. Frigid winds howled and heavy snow blanketed the roads. Beardsley was undeterred. He convinced his coach to let him attack the hills as planned despite the worsening weather conditions. 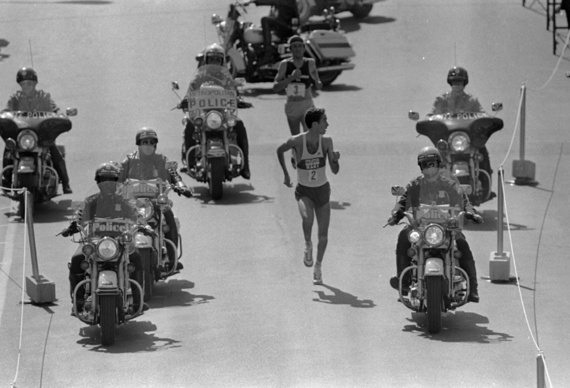 Beardsley left fresh tracks in the snow as he climbed up and down Heartbreak Hill eight times that day. Each time he grew stronger and more confident knowing that his opponent was somewhere warm and comfortable. When he finished his workout he told his coach the hills belonged to him.

In 2014, I ran the New York City Marathon for the second time. My goal was to run faster than ever before, and qualify for the Boston Marathon by running under 3:25:00. I did everything right and felt very confident before the race.

On race morning, the winds howled through the staging area in Fort Wadsworth. Runners huddled in groups under blankets and in between UPS trucks to stay warm. Crossing the Verrazano Narrows bridge, I was blown sideways by wind gusts reaching speeds of over 40 mph. Winds would continue to blow at a steady 20 mph. It was not a day for fast times and personal records.

As I ran, I thought about my long training runs along the New Hampshire seacoast. I was used to battling winds that could steal the breath from your mouth and make you feel as if you were running in place. I crossed the line in 3:20:01.

Perfection is an illusory concept. We chase perfection, yet we know it is unattainable. Running is an imperfect sport that rewards those who adapt and persevere regardless of the conditions. To paraphrase the words of poet and author Margaret Atwood: "If I waited for perfection, I would never run again."