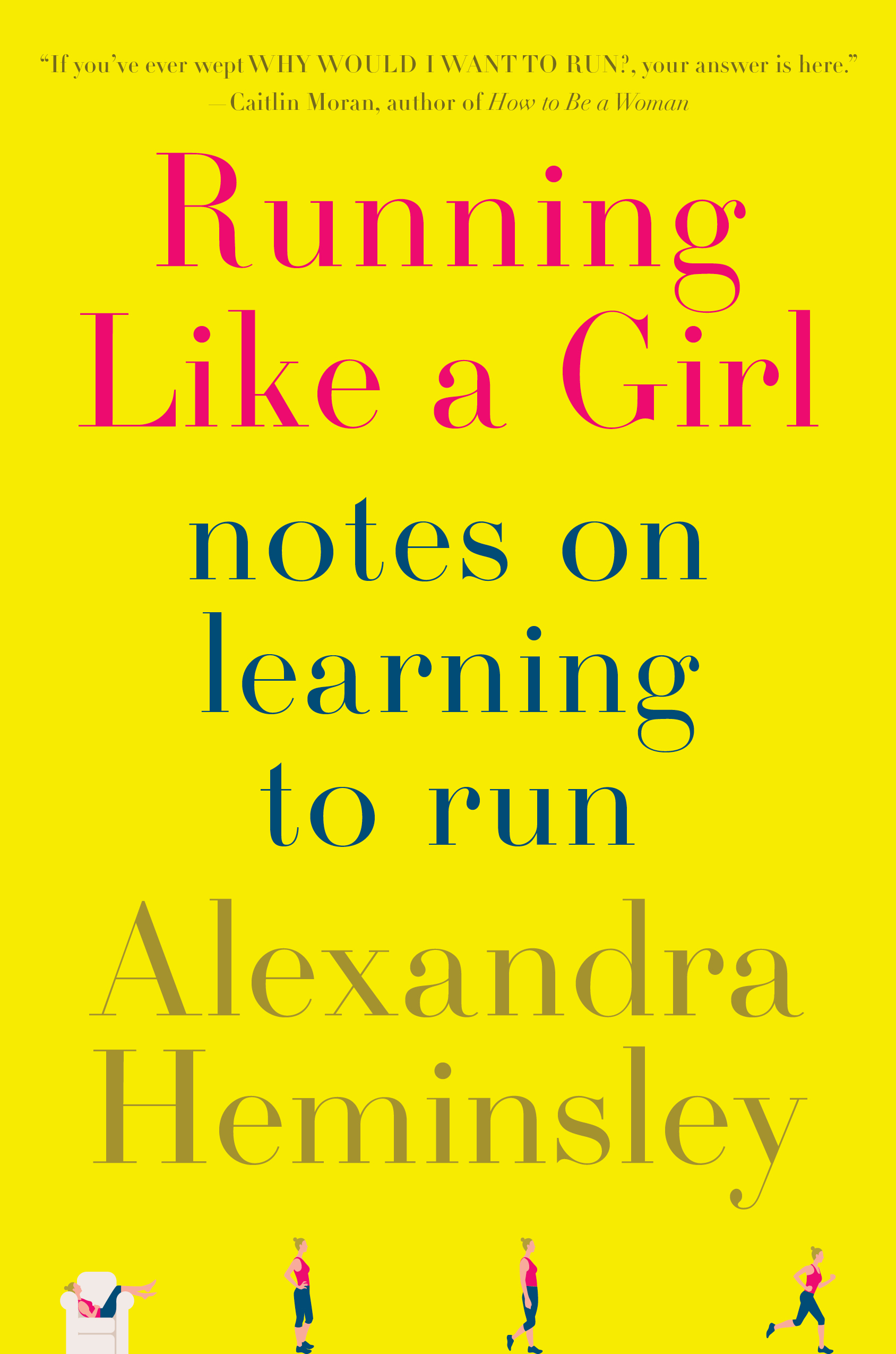 The following is adapted from Alexandra Heminsley's new book, Running Like A Girl: Notes on Learning to Run

I don't remember making the decision that I couldn't run; it was simply one of those things that made me me, like my love of cheese or my distaste for men in turtlenecks.

My preparations [for my first run] were extensive: First there were two weeks of thinking about it. What would it feel like? Would I fall over? How would I get home if I found it too much?

When the morning of The Run came, I woke up and immediately ate three slices of toast with honey, for "energy." Then I spent 90 minutes faffing around on iTunes, trying to compose a playlist of such magnitude that it would propel me round the park, no matter how debilitating I found the experience. Despite my extensive research, I didn't dare to buy anything new. Instead I dug out some old tracksuit bottoms, last worn when I'd had adult mumps and watched two Sopranos box sets in a single weekend. I rifled through my drawers until I found a bra that covered as much of me as possible. I found some old running shoes in the back of my cupboard beneath some festive reindeer antlers.

There was little else I could do to procrastinate. This was it. I was going for a run. I opened the front door and walked down the three steps to the pavement. What was I supposed to do next? Perhaps some stretching? I held on to a lamppost and pulled my foot up behind me, trying to stretch the front of my thigh. I did the same thing with the other leg and looked around anxiously. My heart was beating too fast already. What if onlookers could tell it was my first run? Would they be able to see that I was doing it wrong?

Running. It was just running. As I headed toward the park, the houses became progressively more glamorous and well groomed. I, however, did not.

I was halfway down the road when I had to stop. There was an awful juddering as the whole world moved up and down on account of my lumbering limbs: thud, thud, thud as my feet hit the ground, sending shock waves through both my body and the pavement. Within seconds, my face had turned puce with intense heat and my chest was heaving. I could see the crossroads, but to my ragged humiliation, I could not make it that far. I was not just out of breath; I was having to swallow down panic to keep myself moving at all.

I walked for the length of the next song on my playlist. The indignity of admitting I could no longer run seemed slightly less than that of the physical wreck I would become if I continued. Eventually, I made it to the park and tried to run for the length of the next song. I could not manage that, so I ended up walking past the field of children playing football at the center of the park. Each of them darted around effortlessly, continually in motion, while every part of my body seized up.

My physical self was entirely disconnected from everything my intellectual or emotional self was trying to tell it. "Calm down, putting in the effort is the main thing," was met with, "Yeah right, because putting yourself in this much pain is a great idea."

After several more starts and stops and the total avoidance of eye contact with every person I passed, I got home. It took a good 15 minutes before my breathing and heart rate returned to normal, and almost an hour before my face stopped radiating heat.

When I woke up the next morning, I felt as if I had been run over by a truck. A big truck with huge grooved tires. It felt as if my body were stinging, almost acidic. My limbs were heavy, and muscles I never could have pointed to 24 hours earlier were suddenly making themselves known. Oh, this was an unacceptable way to make oneself feel. I must have overtrained. Later, I looked up how far I had run: one mile. My disappointment could not have been keener.

It was another three months before I tried to run again.

My brother casually mentioned that he was going to apply for a place in the London Marathon.

"Wow!" I gasped. "How amazing to be able to do that! I was so surprised when I went to cheer on a friend. It's such an emotional event."

"You should do it too, then," said my father. His voice didn't flicker. He didn't look up from the cup of coffee he was making. His hands remained steady at the task. All very well, coming from a man who'd run several marathons when we were children, but this was me we were talking about.

"You don't run," he corrected me. "But you're more than able." There was no shadow of doubt in his voice. Hearing it from someone else made me realize: There was nothing stopping me from running but me.

And that was that. The seed was planted.

The next morning I announced that I was not to be broken. I downloaded maps, I discussed nutrition and running style with my brother, and I chatted about shoes and bras with my sister. Somewhat exasperated, my father explained that I had two working legs, no medical problems and a lot of long walks under my belt. He reminded me that it would be about half an hour before adding, "If you get tired, you just walk. You know you can do that."

At first it was exactly like the last time: the burning, the panting, the panic. This time there were two key differences: I was not in my neighborhood, so there was little chance of seeing anyone I knew; and I was running a loop, so I had to get back to where I had started. After about 12 minutes, a miracle: It got easier. My heart rate, while still high, started to even out. Instead of feeling like a never-ending heaven-bound roller coaster that would only ever go up, I steadied. The two beats of my feet started to match the two beats of my breathing -- in and out. I was doing it. Yes, my legs were hurting. Yes, I was scared that I would never make it all the way around the park. But yes! I was running.

By the time I got home from my second run, I was awash with a heady cocktail of endorphins and undiluted smugness. I did some ostentatious stretching with my lights on and curtains open, took a bath (curtains closed) and ate a bowl of pasta approximately the same size as my sister's wedding cake.

It was as if I were experiencing a reverse hangover. Finally, I could see with startling clarity that the time I had spent experiencing pain on a run was outweighed by the amount of time that I felt good about it. I was aglow. I was invincible. I was thinking I might be able to do it again.

One of the few concrete pieces of advice my father had given me the weekend before was to keep a running diary so that I could remind myself how I felt after different runs. When I look at that first entry, it says this:

So exhausted after 12 mins. but then it seemed okay. Felt so
much easier than expected. Might go again!

The next day I emailed my brother. I was going to run; I was going to need a goal to keep me on course. Bumbling around the park indefinitely would not hold my attention, and I wasn't going to see my brother embark on a marathon without me. After all, this might be my only chance for a training partner.

"Hey, do you have that application form for the London Marathon?"

Alexandra Heminsley is a freelance journalist and broadcaster. She is the books editor for Elle UK and a regular contributor to the Sunday Times, BBC Radio, Independent on Sunday and Grazia magazine. She lives in Brighton, UK.