Since the daily running of the bulls at Spain’s weeklong San Fermin festival kicked off Tuesday, new articles about injuries from the dramatic event have popped up every day.

Most articles, though, neglect to mention one group disproportionately injured and killed at the event: the bulls. 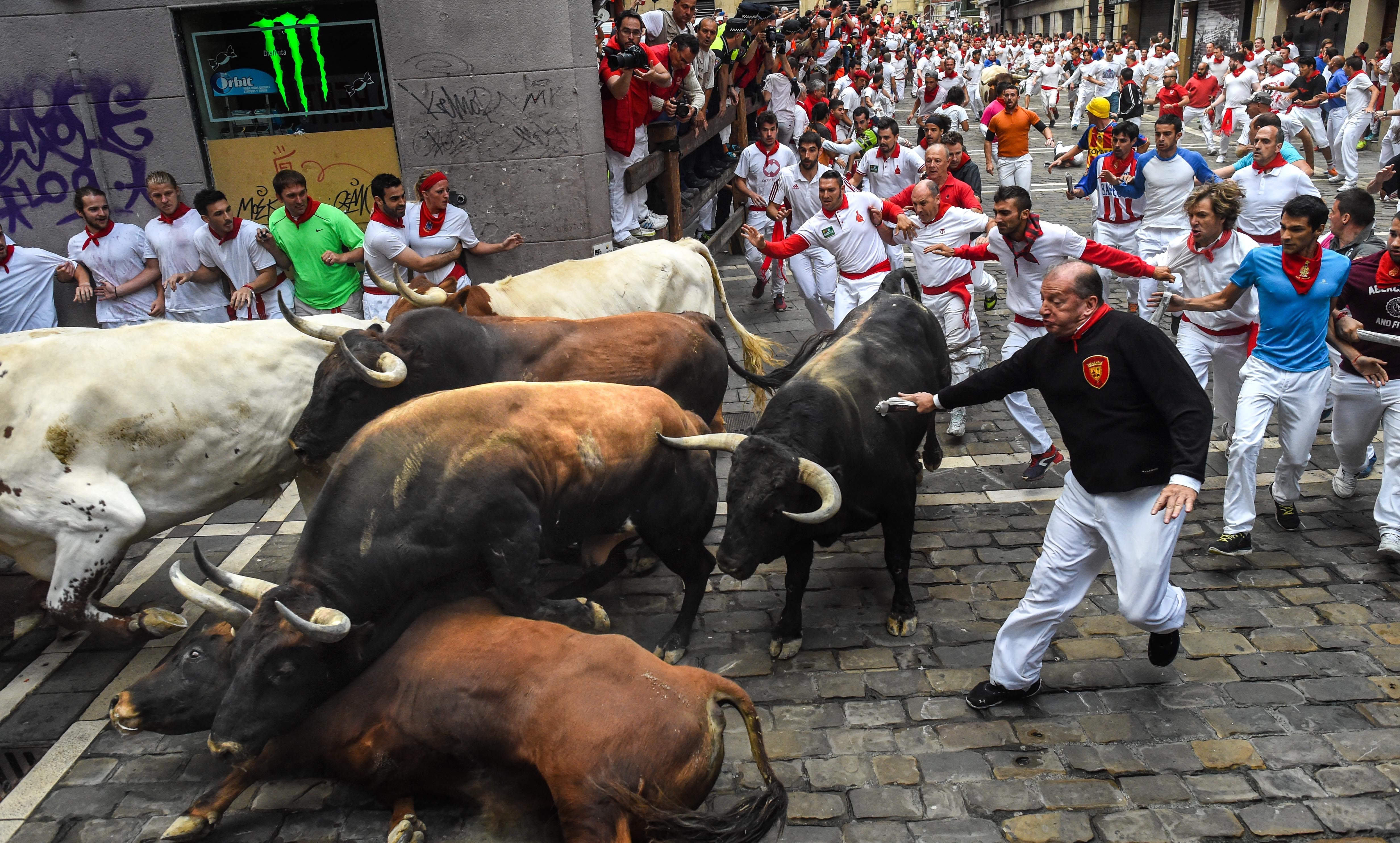 So far this year, 16 people have been hospitalized due to injuries related to the daily bull runs, ABC News reports. Human deaths at the event are rare -- only 15 people have died as a result of the Pamplona bull run since 1924, when official record-keeping first began, according to The Associated Press. Since hundreds of thousands of people have participated in the runs -- 20,500 people ran in 2011 alone -- this is a tiny fraction of the participants.

The portion of bulls killed at the event? One hundred percent.

Much media coverage of the event neglects to mention the bulls’ final destination: the bullfighting ring. In fact, the bull run, which may date back as far as the 13th century, began as a way to move bulls from the corral to the bullfighting ring, according to Time magazine.

Bullfighting -- which is banned in several countries, as well as in the Spanish region of Catalonia -- involves humans armed with swords facing off against bulls. On rare occasions, bullfighters die in the ring, but the bulls are always ultimately killed. 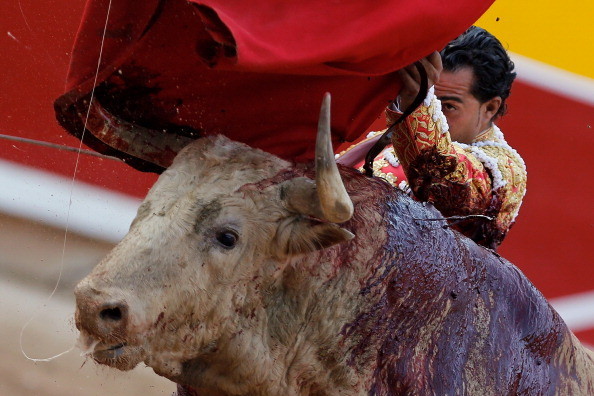 Animal welfare advocates criticize bullfighting as torture for the sake of entertainment. This year, about 100 activists participated in a semi-nude protest organized by People for the Ethical Treatment of Animals and AnimaNaturalis, an animal rights group based in Spain, The Independent reported. Covered in red paint, protesters held signs outside the bullfighting ring reading “Pamplona’s streets are stained with bulls’ blood.”

The League Against Cruel Sports, a U.K.-based charity, notes that bulls sometimes do not die in the ring immediately, but are merely stabbed repeatedly until they become paralyzed, then are still conscious as their ears and tail are cut off for "trophies." 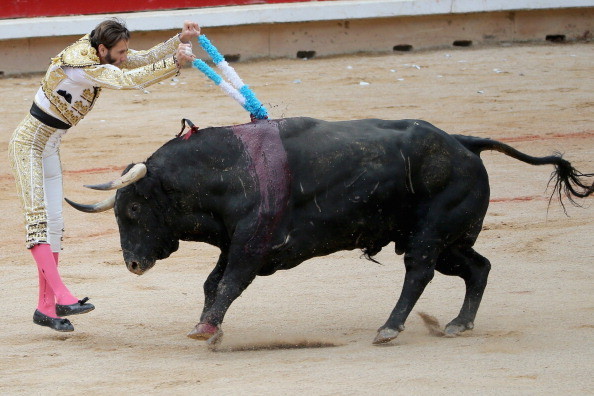 A bullfight at the 2014 San Fermin festival. (Christopher Furlong/Getty Images)

Though the bullfights only technically occur after the bull run, those who oppose the run note that even the run itself is unnecessarily stressful and painful for the bulls. This year, people have been spotted slapping and taunting the bulls and trying to hang onto the animals, ABC News reports.

Proponents of bull runs and bullfighting cite them as joyous cultural events, and dispute that they are frivolously cruel. Alexander Fiske-Harrison, author of Into the Arena: The World of the Spanish Bullfight, argued in a February speech that bulls raised for bullfighting have, on the whole, far better lives than most cattle raised for meat.

Running Of The Bulls Bullfighting 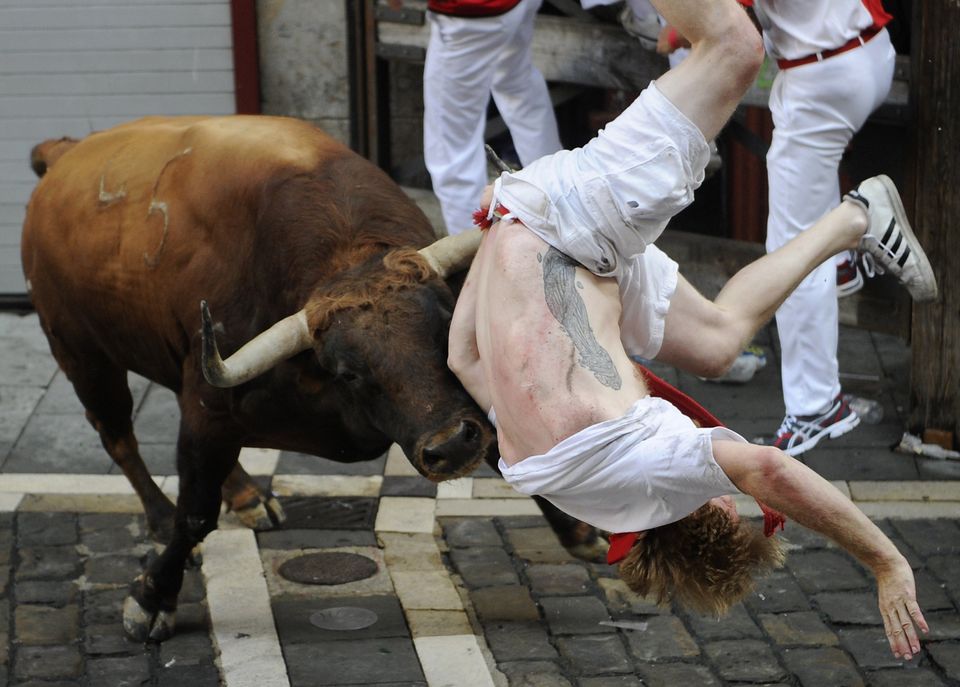 1 / 15
SPAIN-FESTIVAL-TOURISM-SAN FERMIN
A Jandilla bull charges at a participant during the first 'encierro' (bull-run) of the San Fermin Festival in Pamplona, northern Spain, on July 7, 2015. The festival is a symbol of Spanish culture that attracts thousands of tourists to watch the bull runs despite heavy condemnation from animal rights groups. AFP PHOTO/ ANDER GILLENEA (Photo credit should read ANDER GILLENEA/AFP/Getty Images)
ANDER GILLENEA via Getty Images