For many of my friends, 2012 represents a year of new athletic challenges. One wants to tackle a half Ironman. Another plans to take on 100-mile trail race. My own sister, who's given birth to four children in the past seven years, wants to enter several running events in order to motivate her to lace up the shoes and hit the roads.

For me, 2012 is somewhat of the opposite. I've been running marathons, and then ultra marathons, for the past seven years. I've become accustomed to putting several 50Ks, a road marathon and maybe even a 50-mile run on the calendar each January. But this year, I'm taking the opposite track, and scaling back.

The North Face Endurance Challenge 50K race in December (at which I became engaged!) marked my last super long-distance event for the foreseeable future. I decided this would be a good year to take a break. I'm planning a wedding, working at a new job and house hunting -- plenty of things to keep me occupied. For both the body and the mind, I figured, it might be good to cut back.

And so my running year remains relatively unplanned. My fiancé and I decided at the last minute to enter a half marathon trail run next weekend, but our approach is low-key. I envision 13 miles as the longest distance I take on this year, be it road or trail. I have no time goals or long-term plans for running training.

So far, the mental shift has been both welcome and challenging. I have not missed trying to carve out weekend time for the really long runs. (It takes a big hole out of your Sunday when you need to get a 20-mile training run in. And, if you decide to do that out of the city, it could be most of the day.)

On a recent trip to Kauai, my fiancé and I opted for a 10-mile loop run in the Waimea Canyon instead of a longer trek out and back on the Na Pali Coast (which we'd done the last time we visited Kauai). We rose early, caught the sunrise and finished the loop by 10:30 a.m., escaping afternoon heat. Perfect timing for an early lunch of fish tacos and a dip in the ocean. Ten miles seemed a perfect, entirely sane distance. (For anyone going to Kauai and looking for a great loop hike or run, check out the Nu'alolo Trail/Nu'alolo Cliffs/Awa'awapuhi Grand Loop in Waimea Canyon.) 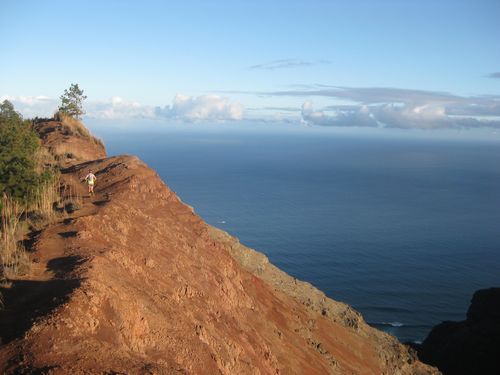 (Above photo taken in Waimea Canyon by Charlie Mills)

I've also loved the relaxing feeling of not having any races on the calendar that I need to prepare for. I can choose to not put on my running shoes for an entire week and not worry that I'm putting myself behind come race day.

In addition, I don't miss the beat up feeling that comes after marathons and ultras. While I love race day itself, I've never enjoyed feeling crippled for days after, with quads so tight that walking down stairs proves an enormous challenge. Shorter races, while challenging in their own right, don't leave me handicapped.

But while cutting back on distance training certainly provides its perks, it is also not without its drawbacks. When I see an intriguing new ultra advertised, it's hard to resist the urge to sign up -- especially when my distance running friends email me asking if I'd like to join the fun. After all, each race represents the chance to see spectacular new scenery, catch up with old running buddies, and push myself in a new way. Crossing the finish line of a marathon and ultra always brings a high and sense of accomplishment.

Competing in endurance events becomes a habit, and it's odd at first to break away from that cycle. I've always believed exercise and ultra running are addictive. In some ways, it's easier to continually seek new, harder challenges or sign up for the same grueling events year after year. Cutting back requires an entirely different mentality that goal-oriented individuals (such as myself) must work to adapt to.

But so far, I'm not missing the training that running long races requires. It will be interesting to see if finishing a 5K or half marathon will become equally fulfilling and satisfy the space that ultras and marathons once consumed.