"If you want to go fast, go alone. If you want to go far, go together," says the old African proverb. Humans are social animals, and to go far in life, each of us needs others for inspiration. I am fortunate in that through my work I meet all kinds of inspiring people. Among the motivational stories I've learned through the years, that of the White Brothers resonates with me particularly deeply. With the passing of their grandmother, Stuart, Marcus, James, Christopher and Henry White have committed to running the "toughest footrace on Earth", the Marathon des Sables, together. Each brother has taken on the challenge to raise awareness and support for a different charitable cause. Two of them, James and Marcus, are running for the mental health cause, and as such, I have been privileged to meet and work with them. Learning of their dedication, their teamwork and their success so far is inspiring me to reach farther in my own life.

The Marathon des Sables (MdS) winds 156 miles, the equivalent of five and a half contiguous marathon races, through the legendary Sahara Desert of Morocco. In six days this April, the five White brothers aim to complete this race together. They will deal with excruciating heat, limited, rationed water, and the infamous third stage of about 50 continuous miles. Heart issues, dehydration, repetitive stress injuries and blisters are all prominent concerns MdS runners face. As James has said, "I'm not sure how I'm going to cope!"

To finish together, the five brothers will indeed have to overcome the odds--one in five contestants on average do not finish the race. The saving grace, as the brothers say, will lie in their teamwork and mutual moral support. "We're going to pull each other across," James says.

The White brothers live on three continents, but have often found time in their demanding training schedules to train together over the last five months. The brothers have been motivated to do this together in honor of their grandmother, who passed in 2015, who had long wished for a closer knit for her family. "Even before the race has started we've developed a sort of 'connective tissue'," Marcus said. "We've communicated more in the last four months than over the previous ten years." 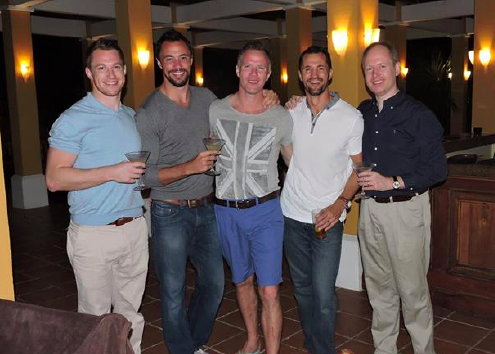 Beyond their family team-building motivations, each brother is running to support a specific charitable cause. Marcus is building awareness for the Australian mental health organization Beyond Blue, which aims to open conversations about depression and anxiety, conditions Marcus has experienced. "For me it's definitely personal. People don't openly talk about it until you start talking about it, and then it's amazing how it unravels and you find out how many people you know are suffering from it. It's important for me to get a message out there that it's not a bad thing to share, that you don't have to be proud not to talk about these things."

James, three years younger than Marcus, is running to support my organization, IMHRO (One Mind Institute), because he likes our focus on developing preventive treatment for psychiatric diseases. "If we could get to a step before illness develops, which is understanding how the brain works and how we can effect treatment before it ever happens, that for me is a Utopia," he says. All of us at IMHRO are thrilled he's chosen to champion our cause.

The other three White brothers are supporting equally worthy causes: Stuart is running for the Cystitis and Overactive Bladder Foundation (UK), Christopher is running for the Alzheimer's Society (UK), and Henry for Guide Dogs for the Blind (UK).

With just over a month to go until the race starts on April 10, 2016, I have been following the Whites on their Instagram feed. Even though it is clear they are having a ball while training, it is just as clear they are pouring on the moxie. As I have thought about the lengths to which they are going to make an impact, my own motivation has multiplied. Inspired in part by their commitment, I have decided to apply for a graduate education. On the strength of this education, I will prepare to lead my brain health research nonprofit with even greater efficacy for patients worldwide. What will the story of "6 Days, 5 Whites" inspire you to try?

To learn more about the White brothers and their causes, visit 6days5whites.com.