Today was the first long run of the first week of my first training for a half marathon. Five easy miles. Although five miles are never easy for me.

About four blocks from my house, a guy on a bike wearing hard-core racing spandex passed me. I smiled and gave a little wave. Because I smile and wave at everyone I pass, it just seems to be good exercising manners. His face lit up, he flashed me a huge grin. A couple of blocks later, I'd forgotten about it.

At the mile mark I was trying to tell myself four more wouldn't be so bad. A movement on my right caught my eye. I looked over into the smiling face of the guy from the bike suddenly running beside me. I did not smile back. It was around 9:45 a.m. on a Sunday morning. There were plenty of people around, kids and parents on the playground at the top of the park, a young man taking shots at the basketball court, people walking dogs. And I was scared.

The guy was very fit, not struggling with the slow 11-minute pace the way I was. He stayed beside me or a few steps back. At the corner I sped up and made a right around him. For a little while I though he'd stopped following me. But he had not. Sometimes he was 30 feet behind, sometimes he was right next to me. I have no idea where he left the bike. As we circled around the park again he came up on my left, putting me between him and the curb and making me feel even more boxed in.

Who knew what his intentions were? I do not think he was going to hurt me. But he was making me uncomfortable and my reaction of tension and discomfort were clear.

Halfway along the side of the park there is a fire hydrant. I usually circle around it and return to the intersection where I hit two miles. I slowed until he was right next to me. And I quickly made the turn. About three quarters of a mile after he first pulled up next to me, he left me alone. I scanned my surroundings obsessively for another three quarters of a mile until I couldn't help myself. I stopped with my back to a couple of trees in some shade and called my husband.

I felt like an idiot. A hysterical idiot. My husband and the boys were at a flea market and he asked if he should come pick me up. I didn't know. I was scared to go home, scared he was still watching me. Scared in broad daylight surrounded by people. I decided to keep on going.

At four miles my husband called to tell me he was there in the car and he'd drive beside me home. I thanked him and waved him off. I finished the five miles. I did not see the man again.

In June, the Washington Post published an op-ed by George Will decrying sexual violence against women on college campuses as overblown, creating an atmosphere of victimhood as a prized and privileged status. The Internet blew up with reactions that were all over the place. The ones that stuck with me were those written by women who agreed with Will. I read responses from women who questioned why college girls always thought they were going to be raped. Women asked why those girls thought they would be so special that someone would want to sexually assault them. Women asked why other women were so hysterical.

The 2012 CDC finding that nearly one in five women will be raped in her lifetime? The statistic is nearly the same as a in 2007 study commissioned by the Justice Department* during the Bush administration. It is not a statistic conjured by a liberal administration or harpy feminists to further their agenda. It is real.

Women fear rape for many reasons. I do not fear assault because I think I am special or desirable or that every guy is inherently bad and a potential rapist. Sexual assault is a crime of violence and control, not desire. I have been taught for most of my life that women ask for it through their every action. I have been taught that if I am assaulted, no one will believe me. The comments by some women in response to Will's article support that. When someone larger and stronger than me gets in my personal space, I get scared.

So what the hell happened this morning?

I don't think I was ever in real danger. Still, I changed my plans to run along the partially-secluded path around a stream across from the park after the second mile. I don't think the man's intentions were bad. But he surely knew he was making me uncomfortable and he did not stop.

The bottom line is I am ashamed. For not telling him he was scaring me. For not demanding that he leave me alone. For letting my worry that I would offend him get in the way. For even questioning if I'd been flirting or if I was dressed wrong or if I was asking for it in any way. For feeling small and worthless. For still having dread in the pit of my stomach hours later. For already fearing Tuesday's run. 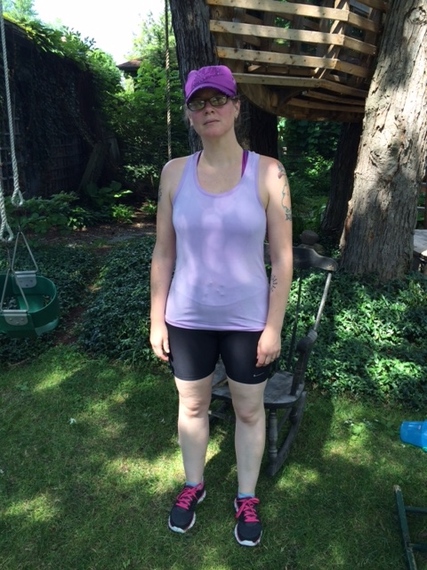 I was not doing anything wrong this morning.