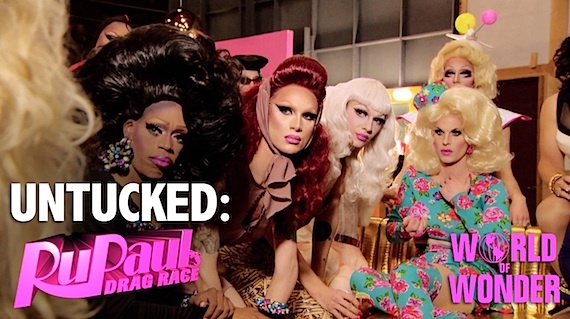 This week on RuPaul's Drag Race (Season 7, Episode 2) the queens took to the friendly skies for their "Glamazonian Airlines" challenge. And in the new accompanying Untucked episode (which lives on YouTube this season), we follow the girls as they untuck and dish backstage, and it looks like some baggage may have shifted during flight. Expect high-altitude attitude as they call attention to Trixie Mattell and Miss Fame's blossoming friendship, and as Trixie and Jasmine spar over their respective styles. And there's even a warm moment between Ginger Minj and Pearl!

And heads up: There are spoilers, so if you haven't seen the full Drag Race episode, check it out at LogoTV.com first.

BONUS: Need more RuPaul's Drag Race dish? Get silly with the weekly installment of Jon & John's Extra Lap Recap, in which Jon Mallow and I deliver our take on what went down this week. This time around, expect props to Lypsinka, Olivia Newton-John, and Michelle Visage and some really rough drag.