As the legendary rock group starts their last major tour,
one writer considers how they influenced him

My favorite rock band is celebrating their 40th anniversary this summer and I can't wait to see them on stage again. The tour, known simply as R40, will find Rush digging deep into their musical vault and performing songs both new and old. Fans like me can't wait. In fact, over the last few decades I've seen them 28 times. There aren't too many things this durable in anyone's life, so, as the band assesses what it means to be around for 40 years, it has nudged me to do the same. Why do I like them so much? How have they influenced me?

Rush have been in the media a lot lately--movie appearances, a gig on The Colbert Report (R.I.P.), and they were recently inducted into the Rock and Roll Hall of Fame. For a fan like me, it's kind of mind-boggling to see them get any media attention. To be a Rush fan is to feel like you listen to the most popular unpopular band around. Rush has never been cool. They are a nerd band. They write long complex songs, they take their music seriously, and they've never lived the rock-n-roll lifestyle.

For millions of fans, we are now faced with the growing reality that their touring days are over. Ray Danniels, the group's manager, says the chances of the upcoming tour being their last are "somewhere between possible and probable." He also suggested that R40 might be the "last major tour of this magnitude." I'd like to think smaller tours with limited dates might still happen in the future, but who knows? They're in their 60s and it's hard to play the music they do, especially for a three hour set.

I also totally get that some people don't like Rush. That's fine. We all like different things. But why do I like them so much? I could point to their music of course, or their quiet example of staying true to artistic vision no matter what, or their simple faith in perseverance, or their obvious belief in kindness and philanthropy. All of these things are good and honorable; however, what I find myself gravitating towards the most are their lyrics. Even as a boy, I knew I wanted to be a writer, so it was with a sense of wonderment that I found a rock group in love with words and books. Rush gave me a reading list and they allowed me to feel that books were cool. Damn cool.

It started when a friend loaned her copy of Moving Pictures to me. I'd heard "Tom Sawyer" on the radio many times before (who hasn't?) but when I started to read the lyrics on this, their most commercially successful album, I began to realize these guys had a lot more going on than killer riffs and amazing drum fills. Here were songs that made allusions to Mark Twain and Shakespeare while nodding to writers I'd never heard of before.

It didn't take long before I drove to our local mall and picked up Power Windows, which was their latest album at the time. I unwrapped it in the parking lot and read the lyrics on the sleeve. I've always been interested in World War II, and I couldn't believe they had a song about the Manhattan Project. Who sings about the development of the atomic bomb? (Answer: Rush does.)

And so it went for the better part of six months. I bought their albums and read the lyrics before listening to the music. Along the way, I found songs that were inspired by JRR Tolkien ("Rivendell"), Samuel Taylor Coleridge ("Xanadu"), and they also sang about the final days of Ernst Hemingway ("Losing It"). Walt Whitman even made a brief appearance in the title of "The Body Electric." I wanted to read the books that had inspired these songs, and that's how I found myself reading John Dos Passos's brilliant and underrated novels in the U.S.A Trilogy. Suddenly I understood one of my favorite songs--"The Camera Eye"--a little better and I also came to realize that it was Dos Passos who influenced the titles of such familiar Rush songs as "The Big Money" and "Grand Designs." Best of all, I learned more about American and British fiction. But that's just the beginning because Greco-Roman mythology is stitched throughout Rush's album Hemispheres and the spaceship in "Cygnus X-1" is named Rocinante, after the horse in Don Quixote.

Whoever this Neil Peart guy was, he did far more than bash drums and twirl sticks, that's for sure. The man knew a few things about literature and he had a voracious appetite for words. In interviews, I loved how he talked about books as if they were old friends. I took notes. I went to my local library.

Even Rush songs that don't allude to literature have some deep questions embedded into them. Consider "Freewill," which prompts us to think about predestination, evolution, and how much we control our own fates. Here's the last stanza: "Each of us/ a cell of awareness/ imperfect and incomplete/ Genetic blends/ with uncertain ends/ on a fortune hunt that's far too fleet." There's a ton of thought packed into those tight economical lines, and whenever they play this song in a stadium I'm screaming along because they're as true for me today as they were when I was a teenager. Not many songs can resonate down through the decades of our lives as we grow and change. 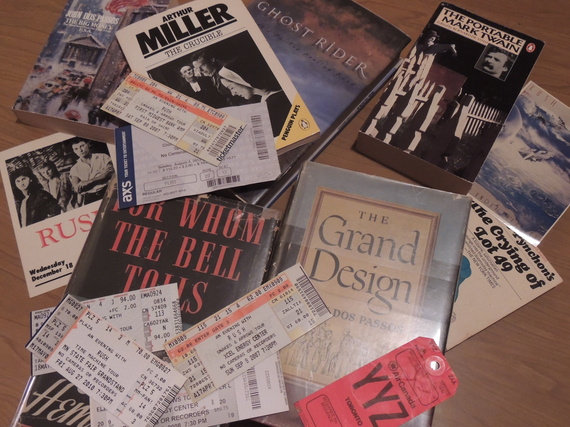 I guess it's no surprise that Rush's lyricist has become an author himself. His best and most powerful book is Ghost Rider. Peart had the double tragedy of losing his daughter in a car accident and his wife to breast cancer. This happened in 1997 and he was suddenly rudderless. Peart hopped on a motorcycle and drove 55,000 miles in an effort to tame and understand his grief. For fans, it was uncertain if the band would ever get back together again. He wrote Ghost Rider as he charted his way through a dense fog of pain.

I believe there are certain wounds we can never heal from, and yet, in spite of such crippling loss, the band reformed and they have since created some of their best work to date. Along the way, Peart started "Bubba's Book Club" where he offers informal book reviews on his website. Recent recommendations include, Dave Eggers, Jennifer Egan, Barbara Kingsolver, Kevin Powers, and Michael Chabon (also a Rush fan).

But I can't write about Rush and books without mentioning Ayn Rand. One of her novels, Anthem, is set in a dystopian future and it influenced one of their most beloved albums: 2112. Her presence in the early days of Rush is undeniable, and because of this I read most of her phonebook-sized novels. She's not a good writer but her ideas are seductive for teenagers and college students who are trying to figure out their way in the world. Hearing about independence, self-reliance at any cost (even at the expense of those around you), and how it's okay to be selfish are intoxicating messages when you're starting off. It didn't take me long to realize how bankrupt her ideas are though. Happiness is generally found in bringing joy to others, in building community, and in helping those around you.

Given Rush's lyrics over the past few decades it would seem the guys have turned from her too. Certainly their belief in philanthropy suggests that we have a responsibility to each other. In March of this year, Rush received the Allan Waters Humanitarian Award in Canada to honor their decades of service to others. Being Rush, however, they never trumpeted the substantial gifts they gave out to food banks, the United Way, various human rights organizations, Doctors Without Borders, AIDS organizations, and flood relief agencies.

The song that really gets me though? That will require a little explanation. 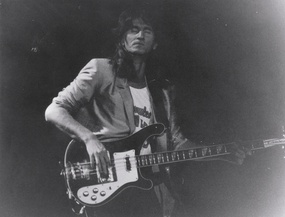 "Red Sector A" was always powerful for me, but this song about futuristic concentration camps has lately taken on a significance it didn't used to have. While I was working on my first novel, I spent a lot of time in Poland researching the Nazi death camps. I spent over thirty hours in Auschwitz, and I also spent time at Treblinka, Sobibór, Bełżec, and Majdanek. I went to these places because I wanted to get the story of the Holocaust right. While I was walking around abandoned synagogues and ruined cemeteries, I remembered that Geddy Lee is Jewish.

I hadn't thought about this at all while I was crafting the novel--I was far more interested in trying to frame my narrative in a believable and sensitive way--but it occurred to me that Lee's parents were survivors of the Holocaust. I wondered where they had come from. What was their story?

It didn't take long to discover that his parents came from a village just south of Warsaw called Staracohwice. Unbelievably, I had taken a train a few days earlier that passed near this tiny spot on the map. As I did more research, I discovered that his parents met in Auschwitz. They managed to survive the industrialized genocide and immigrate to Toronto where they had a little Canadian boy who would go on to become...

It was a strange moment for me to realize that this band, which had helped form my early tastes in literature, was directly tied to the very place I was trying to understand and write about. I remember sitting in my hotel room and thinking about Operation Reinhard, as well as what happened to the Jews of Poland. For the first time, Geddy Lee's background meant something far more to me than how he was raised.

Ever since this realization, whenever I hear "Red Sector A" I don't rock out like I used to. Instead, I stand there and see Auschwitz in my head. I see the other camps too. I see the ghettos emptying.

And so, as R40 begins, I'll be on the floor, yelling out lyrics like I always have, and I'll be thankful to these men who had such a huge impact on my understanding of words. I'm sure "Red Sector A" will be played and, when it is, I'll take a moment to consider how my youth as an aspiring writer, and my adulthood as a professional writer, intersect in the words that Geddy Lee will sing.