WASHINGTON -- The Hall of Famous Missourians in the Missouri State Capitol is filled with the busts of famous people from the Show-Me State. There are political figures (Harry Truman, John Ashcroft), writers (Laura Ingalls Wilder), musicians (Scott Joplin, Charlie Parker) and even a game show host (Bob Barker). Right-wing radio personality Rush Limbaugh, who is currently embroiled in controversy after he called a female law student advocating for contraception coverage a "slut," will soon be joining that esteemed group.

On Feb. 13, Kansas City, Mo. sculptor E. Spencer Schubert posted on his blog that he was in the process of sculpting busts of Limbaugh and Dred Scott, a slave who unsuccessfully sued for freedom for himself and his family in the famous 1857 case Dred Scott v. Sandford, to go into the Missouri State Capitol. Sean Nicholson of Progress Missouri was first to flag the post. From Schubert's site: 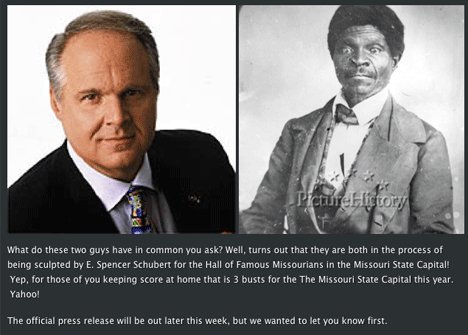 Schubert also posted a picture of him working on the Limbaugh bust, with a photo of the radio host pulled up on his computer screen.

A staffer in the office of the Missouri House of Representatives did not know anything about the Limbaugh project but said that the individuals are chosen by the House Speaker. The picks do not require the approval of full chamber.

Leann Hager, a legislative assistant with Speaker Steven Tilley (R-Perryville), confirmed to The Huffington Post that Tilley had chosen three individuals to be honored this year: Limbaugh, Scott, and baseball legend Buck O'Neil, who was just inducted.

Schubert, who also sculpted the bust of O'Neil, did not return a request for comment.

Limbaugh is currently facing a torrent of criticism from both the right and the left for calling Georgetown law student Sandra Fluke, who spoke out in favor of contraception coverage, a "slut" and a "prostitute" last week. Limbaugh issued an apology for his comments on Saturday, but that has not stopped advertisers -- including AOL, the parent company of The Huffington Post -- from severing ties with his program.

UPDATE: 3:08 p.m. -- The link to the page with Schubert working on the bust of Limbaugh is no longer working. The Huffington Post saved a copy of the picture: 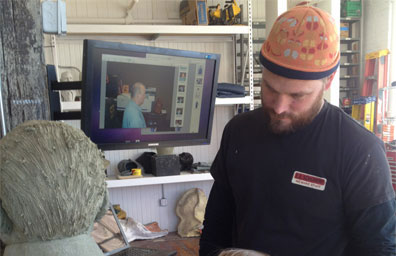 UPDATE: 5:36 p.m. -- Sen. Claire McCaskill (D-Mo.) said Monday on MSNBC's "Hardball" that she opposes the inclusion of Limbaugh in the Hall of Famous Missourians. "He shouldn't be in this hall of fame next to Harry Truman, Mark Twain and Gen. Omar Bradley," she said. McCaskill has a petition on her campaign website on the issue.

UPDATE: 6:10 p.m. -- The St. Louis Post-Dispatch reports that the busts are paid for with private funds raised by the Speaker, and that Limbaugh is expected to be inducted at the end of the legislative session in May. When asked about the selection of Limbaugh, Tilley told the Southeast Missourian, "Keep this in mind: It's not called the Hall of Universally Loved Missourians. We've inducted people like John Ashcroft, Warren Hearnes and Harry Truman. They certainly had their detractors."

CORRECTION:This article has been changed to reflect that Claire McCaskill is a Democratic senator, not a Republican.