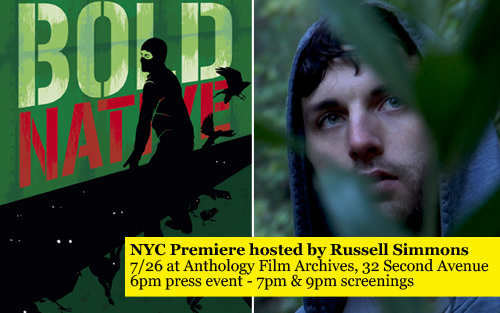 Russell Simmons, music mogul, entrepreneur, and vegan animal advocate will host the New York premiere of the independent feature film Bold Native, the first fiction film about the Animal Liberation Front (ALF), a non-centralized group of animal liberators and economic saboteurs that the FBI calls their top domestic terrorist priority. This special press event and screening will be held on Monday July 26 at 6 p.m. at Anthology Film Archives, 32 Second Avenue (at 2nd Street), in New York City. Doors will open to members of the press at 6 p.m. and the film will begin at 7 p.m. Tickets are still available for the 9:15 p.m. screening.

In Bold Native, Charlie Cranehill (newcomer Joaquin Pastor), an ALF member wanted by the government for domestic terrorism, emerges from the underground to coordinate a nationwide action, while his CEO father (Randolph Mantooth, Emergency) tries to find him before the FBI does. Simultaneously, a young idealist campaigns for more humane treatment of farmed animals on behalf of a large nonprofit organization, and a woman from Charlie's past threatens to undermine his plans.

"We need more creative, fun, impassioned and entertaining movies like Bold Native to drive the important message of animal rights to the masses, " Simmons said.

The film reflects a growing cultural debate about the use of animals for food, clothing, entertainment, and scientific research. It introduces viewers to the Animal Enterprise Terrorism Act (AETA) of 2006, a law which enables the prosecution of activists as terrorists if their actions result in economic damage to corporations in animal industries like factory farms, slaughterhouses, research labs or fur farms. In addition to narrative storytelling, the film incorporates undercover footage from labs, farms, and real-life animal liberations for stunning realism.

"The animal rights movement is unique both in seeking to endow rights to sentient beings currently classified as property, and in terms of government targeting, indicting and imprisoning activists, even for involvement in above-ground, constitutionally protected protest activity," said producer Casey Suchan. "The ALF does break the law, but they outright forbid any action that might cause harm to humans or non-humans -- a track record unmatched by even the FBI itself."

"Bold Native is first and foremost an adventure story about people who risk their freedom for the lives of the innocent and defenseless," said writer/director Denis Hennelly. "While it's a film about a serious subject, it's also a celebration of life, so it has a sense of humor and playfulness that people don't expect."

Simmons will be available for interview and photos at 6:15 p.m. and will introduce the film at 7 p.m. A second screening will begin at 9:15 p.m. Following each screening, there will be a Q&A with Suchan, Hennelly, and stars Joaquin Pastor and Nik Tyler and social justice activist Andy Stepanian, who served three years for nonviolent activism that targeted an animal research lab.

About Open Road Films
Open Road Films develops and produces quality movies across several genres. Prior to Bold Native, its most recent film was Rock The Bells, a critically acclaimed documentary on the final performance of hip-hop artists Wu-Tang Clan prior to the death of frontman Ol' Dirty Bastard. Rock The Bells earned comparisons to Woodstock and Gimme Shelter and has been called the best film about hip-hop ever made. Whether documentary or narrative, Open Road Films chooses experience over comfort, daring over safety, and mythology over conventional wisdom.

Here's a preview of the Bold Native trailer: