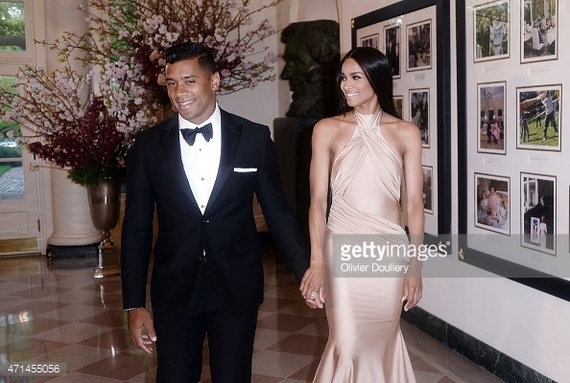 Ciara and Russell Wilson have garnered a lot of attention recently because of their sex life.

Earlier this month, Wilson sat down for an interview at the Rock Church in San Diego where he declared that he and Ciara have decided to abstain from sex until marriage.

Wilson said they made the decision after God spoke to him stating, "[Ciara] was on tour, she was traveling, and I was looking at her in the mirror [...] God spoke to me and said, 'I need you to lead her' and I was like 'Really? Right now?' He goes, 'No, I want you and need you to lead her.'" Wilson continued by describing what he asked Ciara: "What would you do if we took all that extra stuff off the table and just did it the Jesus' way?" He then clarified that he was indeed "talking about sex" and abstaining from it.

When doing research for this piece, one article written on Wilson's declaration, "Fetishizing Abstinence in Pop Culture," caught my attention. The writer speaks about people's odd obsession with celebrities' virginity, typically female ones, and the limited option celebrities have of either coming across as virgins or as sluts and nothing in between. While I find the argument of the piece to be fascinating, I think that Wilson and Ciara's case is a completely different one from that of Brittney Spears, the Jonas Brothers, Miley Cyrus and Selena Gomez. This one is not a question of childhood vs. adulthood nor is it one of Ciara needing to be the sexy virgin that society tells young girls they should be.

The writer states in her conclusion: "While the famous duo has made their private life unavoidably public with this announcement, the important thing to remember here is that this was a decision made between two consenting adults." Although the rest of her piece doesn't focus on this, I believe it is the most relevant starting point for this particular couple. Since they are two adults who have engaged in sexual relationships in the past, if we're going to talk about their decision we shouldn't be comparing them to other celebrities when they were teenagers.

With this in mind, here are my opinions on the matter: I am a bit concerned by some of the language that Wilson used during his interview especially in regards to his call to "lead" Ciara. This one word makes it appear like a decision Wilson made that Ciara then felt she should agree to. This concern is heightened by the lack of any statements coming from Ciara on this decision. Why haven't we heard anything from her yet? I understand if she would rather keep her sex life private but was she not aware that her boyfriend was going to announce this to the world? Seems like another possible example of Wilson "leading" the couple without Ciara having much to say about it.

As a sex positive-person, I support and do not judge the decisions people make with their sex lives so long as they are being safe and all parties involved consent, are respected and are listened to. And while I don't really think it's the public's business to know what Ciara and Wilson do (or do not do) with their sex lives, since it has been discussed by one of the partners I would like to hear from Ciara as well. It feels a bit odd to rely solely on Wilson's account.

Next, I think their declaration is a nice reminder that at any point couples and individuals can choose to do something different with their sex lives than what they've done in the past. For instance, it goes against the commonly held perception and says that just because a woman has engaged in sexual activity previously does not mean she should be obligated to do so with a new partner.

Finally, I think everyone should remember that this couple has only been together since April. Now I know in celebrity world this feels like a long time but we're only in July. It's a bit early to announce such a personal decision to the world. I don't know about you but I'd be pretty mad at my partner of four-ish months if they pulled something like this. Now everyone is wondering if they can do it and if they will succeed. Now the possibility of them changing their minds suddenly involves all the weird fans who feel this could affect them personally too.

But once it's confirmed that the couple has made this decision together I hope that they will be supported, and if for whatever reason they decide to change it, they will not be judged.