For several years now, I've tried to temper satirical criticism of the occasional excess in Russia's political culture with the concern that I'm reducing a complex system of government to the latest installment of News of the Weird. It may not always look like it, but I've tried.

But when I can't look at my Facebook feed without hearing that you've decided to ban trans people from driving cars, I feel like you're just toying with me.

The December 29 decree against people with "disorders of sexual preference" was part of a larger document detailing the medical conditions that rule out receiving a driver's license. Many of these conditions are physical, and are no doubt a response to a real problem. When the economy is in a tailspin, it's definitely time to do something about the undoubtedly huge numbers of legless blind people who insist on getting behind the wheel.

Among the "mental and behavioral disorders" that are now incompatible with driving a motor vehicle are "gender identity disorders," including "transsexualism" and "dual-role transvestism" (I had to look that one up), not to mention sadomasochism, pedophilia, and exhibitionism.

Since the decree was signed by Prime Minister Medvedev, let me start with you. Dima -- can I call you Dima? You've let me down so many times that I feel like I know you. You're like my college roommate's crazy ex-girlfriend, the women's studies major who ran off with that troglodyte frat boy and is now a stay-at-home mom in Connecticut and former local cooordinator of Sarah Palin's Super PAC. Oops, sorry about the cross-gender comparison there, Dima; I wouldn't want to cost you your driver's license.

Dima, in those few years when you were "president" of Russia (looking back on it, I feel that word really does require scare quotes), you managed to convince progressive Russians and Russia-watchers that you were a new kind of "leader" (there go those scare quotes again!). You used the Internet. You had a blog. You kept your shirt on.

But it's clear now that you were just leading us on. Maybe we didn't really know you. Maybe you were just one of those weird guys on the Internet. Dima, did you ever see that movie "Catfish"? I think you were catfishing us. I think....what's that? Oh, I'm really sorry about that license.

Now I'd like to address President Putin. Listen, Vova, you and I go way back. I was there for you when people pointed out that you looked like Dobby from the Harry Potter movies. Yes, it's true, I did come up with the slogan, "Will someone please give Putin a a sock?" But I meant it with love. Well, not love. That would be an exaggeration, not to mention gay propaganda. But at least with a real discomfort about your growing demonization in the Western media. 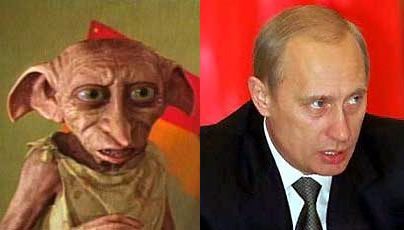 Look, Vova, for years you've been an important voice against American imperial overreach and unilateralism. You kept us out of Syria, and I've been meaning to thank you for saving Edward Snowden from a life of waterboarding and rectal rehydration. But your message gets muddled when you're literally delivering it while on top of a high horse. Especially when that horse keeps crossing into your neighbors' territory.

So, Vova, since this is the last time you and I will be having one of these little conversations, I have to ask: what's up with the gay thing? Why have you let your agenda be hijacked by homophobic nut jobs who have nothing better to do than look for insidious queer messages under every rainbow? I'm sure you've been a bit taken aback by the sheer volume of attention this issue has gotten in the Western media, because you never got in the habit of taking LGBT people and their supporters seriously as an actual constituency.

But Vova, you've got to get this homophobia problem under control. I don't think you personally started it, not because I think you're the Good Tsar surrounded by evil advisors, but because Western commentators have the bad habit of assuming that you have godlike control over the country, that not one sparrow will fall to the ground without VVP's knowledge (that's Matthew 10:29 -- I've been brushing up on my New Testament in case you decide to become a theocracy).

I get very uncomfortable when the word "fascism" is bandied about, both by your supporters and your opponents. I think the word stops more conversations than it starts. But when you send out the signal that it's more or less open season on an entire population group, you're unleashing forces that you might really wish you hadn't.

And, no, I don't mean the forces of fascism (well, I do, but if I say it, then I've stopped the conversation). For the purposes of my letter, I mean the forces of lazy satire. Really, the shirtless photo on the horse should have already taught you this lesson: don't make yourself an easy punchline.

And that's why I'm tendering this letter of resignation. Every time some new official homophobic outrage is announced, I have to ask myself: am i really going to bash the Russian government for gay-bashing again? Haven't I already done the gay thing enough already? (See what I did there? See how I invited a humorous response? That's what you've got to stop doing.)

If satire is worth the time, it has to involve at least some amount of effort. No one is amused by a single entendre.

Vova, Dima, make me work for it. Otherwise, how can I respect you in the morning?