MOSCOW, March 4 (Reuters) - A few days before Russia's presidential election, Sergei Smirnov received a phone call from a man who called himself Mikhail and told him the terms of the deal: you will vote for Vladimir Putin four times and receive 2,000 roubles ($70) in return.

The sum was promised to dozens of other young men and women who met on Sunday outside a popular fast food joint on the southwest fringe of Moscow, waiting to be taken to various polling stations in the province that rings the capital.

Smirnov, a journalist, said he found the group a few weeks prior to the election through a friend. Mikhail, whom he met at Moscow's Yugo-Zapadnaya (Southwest) metro station on Sunday morning, gave him final instructions.

"He said we should vote for Vladimir Putin, photograph the ballot, and send him the photograph by phone," Smirnov said.

Smirnov is one of several activists who infiltrated and followed a group of what he said were "carousel" voters, as Russians call people who cast several ballots at different polling stations using documents reserved for absentee voters.

It is a practice critics say has been used to pad results for Kremlin candidates in elections since Putin came to power in 2000, including a Dec. 4 parliamentary vote in which suspicions of fraud prompted the biggest protests of his 12-year rule.

Opposition politicians said Sunday's election, in which Putin won a six-year term with nearly 60 percent of the vote - enough to avoid a runoff he would have faced if he fell short of 50 percent - was no exception.

"Nobody expected these carousels ... it is complete impudence," said Alexei Navalny, a popular protest leader who is among those planning new demonstrations starting on Monday in Moscow and other cities.

Navalny, who sent observers to polling stations, said he had been receiving reports of potential violations all day.

Stung by allegations of fraud in the parliamentary vote, Putin ordered thousands of web cameras installed in polling places nationwide for Sunday's election, and in a victory speech he said he had won "in an open and honest struggle".

But critics said the group Smirnov joined was just one of many instances of suspected fraud.

A YouTube video posted by someone who identified themselves as Fremstiller showed men in Russia's southern province of Dagestan stuffing ballots into boxes one after another http://www.youtube.com/watch?v=KTbdeyfXeGE.

Lawmaker Ilya Ponomarev said that by Sunday afternoon he had heard of dozens of cases of alleged fraud, including carousels.

He said Russia's electoral system was permeated by a culture of fraud built less on orders from the top than on the initiative of regional and local officials who are eager to please those above them.

"Vladimir Putin has a system in place in which provincial authorities are obliged to hold up the result of the ruling party. They know that if they don't attain the right result they could lose their jobs," Ponomaryov said.

"They act out of instinct to cheat in the elections."

The alleged "carousel" voting ring in Southwest Moscow had voters' names registered at several polling stations, he said, where local election officials most likely knew they were part of a vote rigging organisation but failed to stop them.

"When people have absentee ballots that don't match their passport ... the election commission members usually understand that it is better to let them vote," he said.

Smirnov spoke outside a police station where officers were questioning Mikhail - Mikhail Nazarov, who told Smirnov he was a student at the elite Moscow State University.

In a series of video and sound recordings, Smirnov and others documented cars full of voters travelling to Vnukovo, a town outside Moscow, from there to the village of Tolstopaltsevo, and then back to Moscow.

Smirnov said he was put in a car with three others, one of whom was a friend who helped him gain access to the group.

"The other two were saying that it wasn't the first time they had done such a thing and that in the last elections they had voted at six polling stations and for that they paid them 5,000 roubles ($170)," he said.

Natalia Pelevine, who worked with Smirnov, said she and others caught another alleged member of the group handing out wads of 500-rouble notes in a nearby metro passageway to women they had followed in cars from polling stations outside Moscow.

The woman who received the money fled but Yulia Chelnokova, who was handing it out, was trapped after the activists called for the help of police, who detained her. Nazarov was also detained.

Nazarov and Chelnokova were questioned in a police station in the metro and then transferred to another police station. When questioned by Reuters in the presence of police, Nazarov denied having set up or being part of a "carousel" voting group.

During voting the Russian blogosphere was rife with pictures of voters getting on and off buses at polling stations, a familiar scene that can indicate multiple voting.

Some of the thousands of mostly young people who took part in pro-Putin rallies after polls closed were brought to Moscow by bus. A woman at one rally who gave only her first name, Ira, said she had voted at two different polling stations.

Putin is likely to use his election result to show that he has support from the majority of Russians and dismiss opponents as a small group of dissenters.

Suspicions of fraud could help opposition leaders keep up the protest movement that erupted after the December election and brought tens of thousands of people into the streets.

"This shows major violations of the law and will play a large role in how we respond in protests," Pelevine said at Navalny's headquarters. "We're trying to make it as public as possible so that people know." 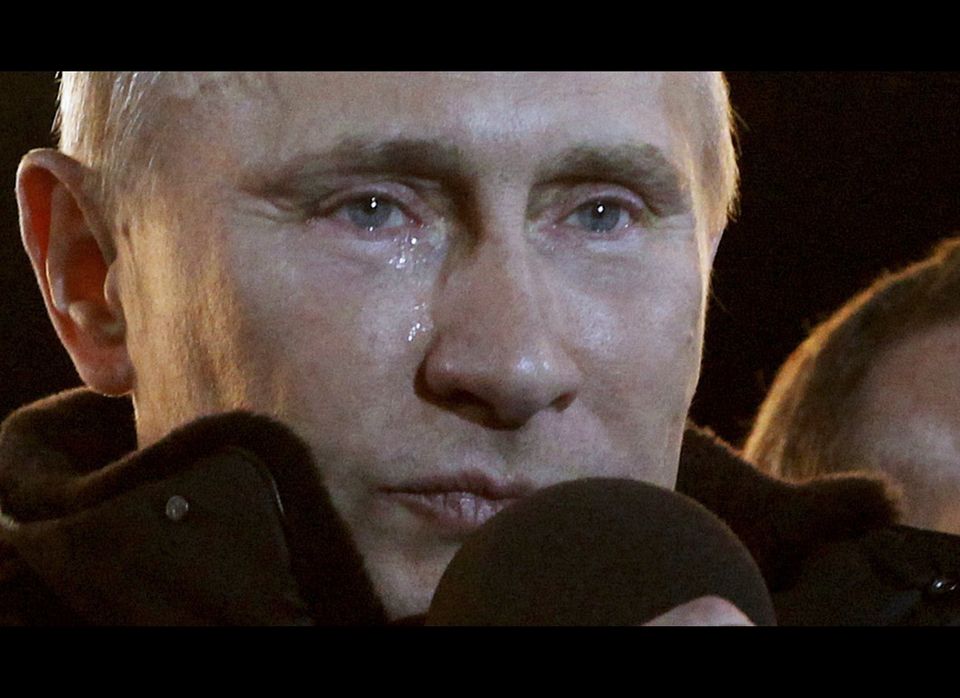 1 / 18
Russian Prime Minister Vladimir Putin, who claimed victory in Russia's presidential election, tears up as he reacts at a massive rally of his supporters at Manezh square outside Kremlin, in Moscow, Sunday, March 4, 2012. Vladimir Putin has claimed victory in Russia's presidential election, which the opposition and independent observers say has been marred by widespread violations. Putin made the claim at a rally of tens of thousands of his supporters just outside the Kremlin, thanking his supporters for helping foil foreign plots aimed to weaken the country. (AP Photo/Ivan Sekretarev)
AP