By Hong Soon-do, Beijing correspondent, AsiaToday - Amid falling international oil prices and economic slowdown, Russia is eyeing to attract Chinese cash. In particular, Russia is reportedly making various efforts to vitalize its economy by luring Chinese tourists, commonly known as youker. According to the August 21st report of Cankao Xiaoxi, a Chinese daily newspaper published by the Xinhua News Agency, Russia's such move seems not irrelevant with China's troubled relationship with its neighbor countries. As Chinese authorities seem to be deliberately regulating Chinese citizens' trips to these countries, Russia is naturally benefiting from this and trying to cash in on this positive trend. 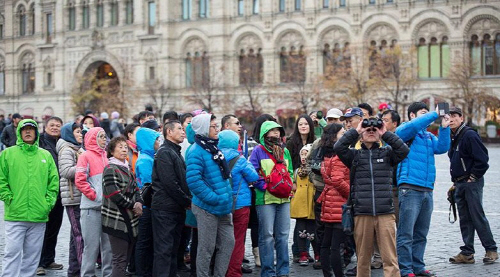 What Russia is currently doing to attract Chinese tourists is quite simple. Moscow started to expand transportation infrastructure and the number of hotel rooms near Vladivostok, one of the most popular destinations among Chinese travelers. Russia has also introduced a visa-free regime for Chinese tour groups.

Russia will obviously make microscopic efforts in the future. Russia is expected to promote Chinese interpreter training program and seek to develop tailor-made packages for Chinese tourists. Ultimately, Russia plans to establish Chinatown and special tour program for China tour groups. If this is the case, China and Russia could rapidly increase various kinds of economic interchange as well as joint projects between companies from the two countries.

Of course, there are pessimistic observations as well. Such observation is not an exaggeration considering the fact that Russia possess weak soft power and it's not a country that manufactures world hit goods preferred by Chinese. Besides, many Chinese tend to worry about the safety of traveling in Russia.

Nevertheless, Russian tourism players are likely to make active efforts for a while. Korea, whose relationship with China remains uncomfortable after its decision to deploy THAAD in Korea, should not remain a mere spectator.