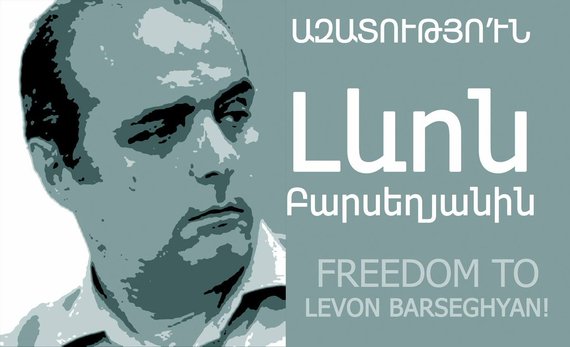 Image: This poster is circulating virally on Armenian social media. Journalist and human rights defender Levon Barseghian was recently arrested after criticizing the authorities during the ongoing Erebuni protests in Armenia.

YEREVAN, Armenia -- When I learned that armed men had occupied a police station in Armenia on July 17 to demand the release of a fringe opposition figure, I thought it would blow over quickly.

Like most observers, I thought the dozen occupiers of the station in Armenia's capital of Yerevan had no chance to prevail against the police and security forces of President Serzh Sargsyan's government.

The occupiers were basically hoping for a miracle: parlaying their takeover into a general uprising against the government.

They have failed to achieve that goal as yet. But there are signs they have tapped a vein of discontent against the current political leadership that runs very deep, and -- if the regime isn't careful -- could lead to a change of government.

As many as 2,000 protesters at a time have taken to the streets to support the occupiers, and journalists and columnists have seized on the discontent to write excoriating pieces about the Sargsyan regime's shortcomings.

The station occupiers have had two demands.

One is that the government free Jirair Sefilian, head of the small Founding Parliament Party. The government jailed him in June on an accusation of planning a coup attempt -- charges the station occupiers and his other followers say are trumped up.

Sefilian has never commanded a large political following in Armenia, although he's admired on two counts: one for being a hero of the Nagorno-Karabakh war between Armenian separatists and Azerbaijan, and, second, for publicly demanding Sargsyan's resignation.

In fact, the police-station occupiers' second demand has been that Sargsyan resign.

The wily former military general is not about to do that.

The deck in this game of bridge is stacked in his favor, and he knows he has a powerful bridge partner -- the Russians -- although that partner could turn on him.

He has gnashed his teeth about the color revolutions that overthrew governments in Georgia, Ukraine and Kyrgyzstan.

He has propped up Bashar al-Assad to make sure regime change doesn't occur in Syria, a longtime Russian ally.

And his Kremlin minions have portrayed previous domestic unrest in Armenia as a Western plot to foment a color revolution in Russia's most pliant ally.

Many Armenians would like to get rid of Sargsyan. The resentment they feel about the regime's corruption and its perceived indifference to the country's widespread poverty has been building for years. It was heightened when Sargsyan pushed through a new constitution in December of 2015 that allows him to govern for many more years.

As political analyst Grigor Atanesian noted in a recent perceptive piece in the Moscow Times, this is the fourth summer in a row that Armenians have held protests against the Sargsyan regime.

In the summer of 2013 they demonstrated against increases in public-transportation prices. In 2014 it was government plans for pension reforms that would leave pensioners worse off. And in 2015 it was an increase in electricity rates.

"But this summer's protest is different," Atanesian said. "No longer are the demands social and economic; now the ultimatum is regime change."

There have been many twists in the station-occupation drama since it started almost two weeks ago.

In terms of violence, occupiers killed one police officer and wounded two others, and police wounded two who made the mistake of going outside the station to patrol. The raiders took several hostages, released them in dribs and drabs until there were none, then took hostages again -- medical staff who entered the station to treat the men whom police wounded.

In terms of efforts to resolve the situation, the government has offered amnesty to the raiders if they surrender, and Sargsyan has offered to meet with Sefilian -- also if the occupiers lay down their arms.

With the exception of wounding the two occupiers patrolling outside the station, the government has tried to defuse the stand-off peacefully -- although police have been roughing up some of the pro-occupation demonstrators.

The last thing Sargsyan wants is to create martyrs the opposition could use as a rallying cry for regime change.

As savvy a politician as he is, he has to be aware that although Russia has his back, the Kremlin's support is a two-edged sword.

Given the Russians' military intervention against pro-European Union and pro-NATO regimes in Georgia and Ukraine, Armenians know that Russia, which has two military bases on their soil, wouldn't hesitate to use its troops to put down a color revolution.

If Moscow did have to intervene, it would likely hold Sargsyan accountable, for allowing the situation to get out of hand. And, as it did during Soviet times with leaders it considered weak, it might then arrange for a hard-liner to replace him.