ST. PETERSBURG, Russia (AP) — Deep inside a four-story marble building in St. Petersburg, hundreds of workers tap away at computers on the front lines of an information war, say those who have been inside. Known as "Kremlin trolls," the men and women work 12-hour shifts around the clock, flooding the Internet with propaganda aimed at stamping President Vladimir Putin's world vision on Russia, and the world.

The Kremlin has always dabbled in propaganda, but in the past year its troll campaign has gone into overdrive, adding hundreds of online operatives to help counter Western pressure over its role in the pro-Russian insurgency in eastern Ukraine. The program is drawing Serbia away from its proclaimed EU membership path and closer to the Russian orbit, and is targeting Germany, the United States and other Western powers. The operation has worried the European Union enough to prompt it to draw up a blueprint for fighting Russia's disinformation campaign, although details have not yet been released. 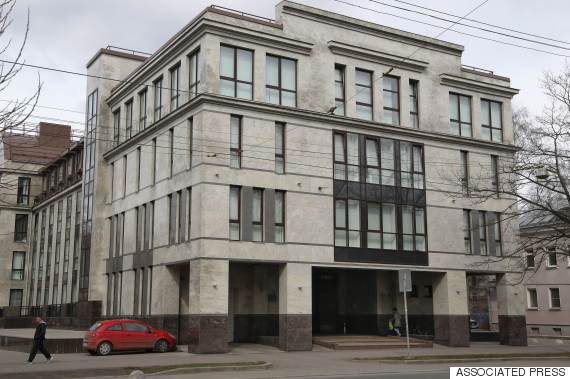 In this picture taken on Sunday, April 19, 2015, a women enters the four-story building known as the "troll factory" in St. Petersburg, Russia. (AP Photo/Dmitry Lovetsky)

Lyuda Savchuk, a single mother with two children, worked in the St. Petersburg "troll factory" until mid-March. The 34-year-old journalist said she had some idea of the Orwellian universe she was entering when she took the job, but underestimated its intensity and scope.

"I knew it was something bad, but of course I never suspected that it was this horrible and this large-scale," she said in an interview in her apartment, which has colorful drawings on the walls for her two preschool-age children.

She described how the trolls manage several social media accounts under different nicknames, such as koka-kola23, green_margo and Funornotfun. Those in her department had to bash out 160 blog posts during a 12-hour shift. Trolls in other departments flooded the Internet with doctored images and pro-Putin commentary on news stories that crop up on Russian and Western news portals.

In some departments, she said, the trolls receive daily talking points on what to write and what emotions to evoke. "It seems to me that they don't know what they are doing," Savchuk said. "They simply repeat what they are told."

Her descriptions of the work coincide with those of other former trolls who have spoken publicly, although Savchuk is one of the few willing to have her full name published. She quit after a little more than two months, after finding she couldn't stand being part of a propaganda machine. 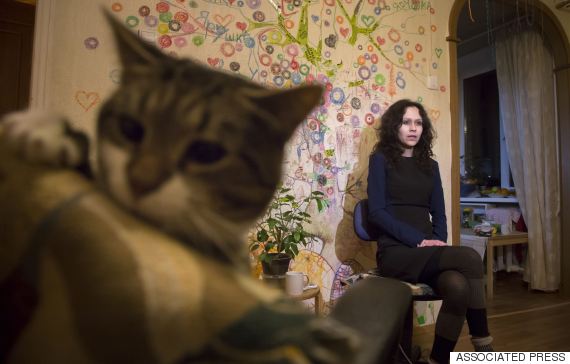 Lyuda Savchuk was once a Kremlin troll working as part of an immense propaganda machine. (AP Photo/Dmitry Lovetsky)

The trolls are employed by Internet Research, which Russian news reports say is financed by a holding company headed by Putin's friend and personal chef. Those who have worked there say they have little doubt that the operation is run from the Kremlin.

St. Petersburg journalist Andrei Soshnikov, who was one of the first to report on the "troll factory," said about 400 people work in the building. A video he posted on YouTube this spring gave a rare glimpse inside the building; in one room trolls were shown sitting shoulder-to-shoulder at their computers. The operation moved into the building when it expanded in March 2014, the month Russia seized Crimea from Ukraine and provoked the first round of Western economic sanctions.

Soshnikov, a reporter at the weekly Moi Rayon, or My Region, said there has been a new push in recent months to hire more English-speaking trolls as part of an effort to sway public opinion in the United States.

"All of a sudden, (they) switch on Russia Today and realize that this is a holy land, Obama is a bloody dictator and true freedom of speech exists only in Russia."

In Serbia, trolls are recruited through several small right-wing parties that are both financially and politically supported by Russia, media analysts say.

When Russian opposition leader Boris Nemtsov was killed in Moscow in late February, the Serbian trolls were quick to react. "Who is to gain from this assassination but America? It must have been CIA," was the dominant mantra that took hold in discussions on Serbian news sites. "Likes" went into the hundreds, while comments such as "Putin is responsible" received widespread ridicule.

Serbs receive most of their information about Russia from Moscow-backed media, and the trolls reinforce the Kremlin line. The result is a widespread view in Serbia that the Kiev regime is neo-Nazi and that Putin was right to annex Crimea.

"One of the consequences is the fact that popular support for the EU integration has dropped below 50 percent for the first time since democratic change in Serbia in 2000," said Jelena Milic, a political analyst at the Center for Euro-Atlantic Studies, in Belgrade. "It is going to be very hard to recover this public support."

In Germany, the foreign ministry has tried to counter the propaganda by issuing a memo to its diplomats on how to debunk some of the standard Russian arguments about the Ukraine conflict.

For instance, the memo answers the statement that "fascists are in power in Kiev" by noting that radical and far-right groups made up only a small proportion of the demonstrators who ousted the Russia-friendly president, and that far-right parties did very poorly in subsequent parliamentary and presidential elections.

Dusan Stojanovic in Belgrade, Serbia and Frank Jordans in Berlin contributed to this report.