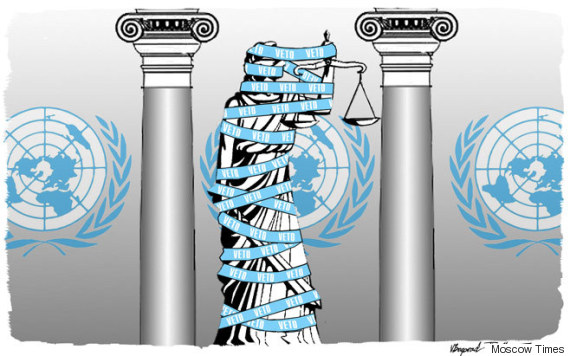 MOSCOW -- The anniversary of the tragic downing of flight MH17 over the Donbass on July 17, 2014 that killed all 298 on board caused another surge of debate over who committed this crime. Fueling that debate is a draft resolution before the UN Security Council calling for the establishment of an international tribunal to punish those responsible. Russia quickly said it would veto the measure. China also criticized the initiative, urging the Security Council to fulfill Resolution 2166, adopted last year, which calls for a comprehensive investigation into the incident and to punish those responsible. Moscow obviously found few supporters for its position. After all, if Russia is blocking the tribunal, it must have something to hide.

A small, highly politicized minority in Russia would like to see this "bloody regime pilloried" by the forces of international justice. Having lost faith in the Russian justice system for its servility before the ruling authorities, they sincerely believe that only foreign powers can "bring this regime to justice." However, I think that path is a dead end: outside forces cannot cure Russia's internal illness. It is also wrong to compare modern Russia with Nazi Germany or Imperial Japan, criminal regimes accused of mass war crimes and crimes against humanity following the end of World War II.

Even a finding that places blame squarely with the regime of President Vladimir Putin would not increase anti-Putin sentiment at home. Most Russians already accept that Donbass separatists shot down the plane, but that they did so unintentionally, just as Ukrainian air defense forces in training inadvertently shot down a Russian passenger plane flying from Israel to Novosibirsk in 2001. The vast majority of Russians view the incident as an "episode of war," as "collateral damage" roughly equivalent to the Ukrainian forces' indiscriminate shelling of civilians in the Donbass -- a crime of which state-controlled television constantly reminds them.

"If Russia is blocking the tribunal, it must have something to hide."

There are no generally recognized provisions for the creation of such a tribunal. The initiators based the resolution on Chapter VII of the UN Charter that refers to actions in response to a threat to peace. It was necessary to characterize the air crash as a "threat to international peace and security" to justify the creation of a tribunal. By contrast, last year's Resolution 2166 makes no such claim, even though most already believed at that time that pro-Russian separatists had shot down the aircraft.

In order to form such a tribunal, the UN Security Council would also have to work out its charter and select judges -- as was done for the tribunals created to examine the situations in the former Yugoslavia and Rwanda. (In fact, the international community has created only four such tribunals since World War II.) Agreement from all five permanent Security Council members is required to form a tribunal, although it is theoretically possible to circumvent that body with the help of Resolution 377 that requires support from two-thirds of the General Assembly -- that is, from 129 countries. The United Nations has invoked that resolution only 12 times in its history. To get some perspective, only 100 countries voted in March 2014 to condemn Russia for its annexation of Crimea. What's more, it is entirely possible that other permanent Security Council members beside Russia do not want to create a precedent by convening an international tribunal. That might unlock a Pandora's Box.

There are no precedents for creating an international tribunal in response to individual crimes -- even those as terrible as the downing of a civilian aircraft. All four UN tribunals addressed mass and systemic war crimes. Russia felt the tribunal on Yugoslavia was too politicized and that its "disappointing" findings reflected an anti-Serbian bias: of 155 individuals charged, 92 were Serbs. They were considered "the guiltiest" in the interethnic war there.

"If Ukraine has nothing to hide, why hasn't it been more forthcoming?"

Beyond rejecting the idea of a tribunal for the downing of an aircraft, Russian politicians are openly disappointed with what they increasingly refer to as "so-called" international law. As one example, Russia's Constitutional Court recently ruled that decisions made by the European Court of Human Rights would have limited application in Russia if they contradict this country's constitution -- even though the constitution clearly recognizes the supremacy of international law. The Kremlin sincerely believes that "so-called international law" is essentially a set of rules favoring Washington and other Western capitals, and has made it clear that it is fed up with such "law." Moscow also sees political motivations behind the ruling of the Permanent Court of Arbitration in The Hague concerning the Yukos case -- another act of "international law." It held the same view of the earlier decision of the International Court of Justice that justified Kosovo's declaration of independence in violation of Serbian law, and without Kosovo even holding a referendum. The Kremlin expects the same treatment if a tribunal is established over the downing of flight MH17 -- especially since some Western media have already concluded that "Putin shot it down."

However, it remains doubtful that the separatists are alone to blame for the downing of the plane. I personally believe that the separatists did shoot it down after mistaking it for a Ukrainian military transport aircraft, and that the international investigation will confirm this. However, even if that is true, Ukraine needs to shed light on the activities of its military that day. Kiev has never responded to Moscow's demands that it divulge the flight plans of its air force, a listing of missiles fired that day and the transcripts of its air traffic controllers. If Ukraine has nothing to hide, why hasn't it been more forthcoming? Is Ukraine really so "squeaky clean" that it has nothing to fear from the claims of the victims' relatives?

And I believe that the fate of former Libyan leader Muammar Gaddafi continues to play a major role in the Kremlin's thinking concerning all "color revolutions," including last year's in Ukraine, and very possibly prompted Putin's return to the Kremlin. Gaddafi had so thoroughly let his guard down before the West that he not only admitted that Libya's secret service had shot down the Pan Am passenger flight over Lockerbie, but even paid $2 billion in compensation to the victims' families. And where did that get him? Six feet under, that's where.