By Alexander Winning and Katya Golubkova

MOSCOW, Feb 28 (Reuters) - Thousands of stunned Russians laid flowers and lit candles on Saturday on the bridge where opposition politician Boris Nemtsov was shot dead near the Kremlin, a murder that showed the risks of speaking out against President Vladimir Putin.

Nemtsov, 55, was shot four times in the back by assailants in a white car as he walked across the bridge over the Moskva River in central Moscow with a Ukrainian woman, who was unhurt, just before midnight on Friday, police said.

Police sealed off the blood-stained bridge close to the red walls of the Kremlin and Red Square for two hours overnight, then hosed it down as people came to pay tribute to one of Putin's biggest opponents over Russia's role in Ukraine.

Flowers were piled at least a meter (three feet) high, about two meters deep and two meters wide. A piece of white paper saying "We are all Nemtsov" stood among the flowers. 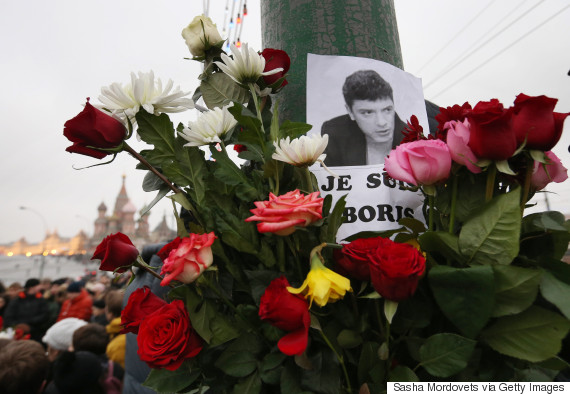 A former deputy prime minister who had feared he would be murdered, Nemtsov was the most prominent opposition figure killed in Putin's 15-year rule.

His gangland-style killing was reminiscent of the chaotic 1990s after the Communist Soviet Union collapsed and raised further questions about the opposition's ability to mount any challenge to Putin in such a dangerous environment.

The Kremlin deflected accusations that it was to blame and Putin called for the killers to be found quickly, taking the investigation under presidential control and denouncing what he said was a "provocation" before an opposition protest on Sunday.

But the killing focused attention on the tough treatment of opponents in Putin's third term, during which several leading critics have been jailed or have fled the country following mass rallies against the president, a former KGB spy, three years ago.

"That a leader of the opposition could be shot beside the walls of the Kremlin is beyond imagination. There can be only one version: that he was shot for telling the truth," Mikhail Kasyanov, an opposition leader and a former prime minister under Putin, said at the scene.

There was no claim of responsibility, though police were following several lines of inquiry and looking at surveillance camera footage in one of Moscow's busiest and most guarded areas. Former Soviet President Mikhail Gorbachev cautioned against jumping to conclusions.

"Certain forces will try to use the killing to their own advantage. They are thinking how to get rid of Putin," he said.

Leading international condemnation of the murder, U.S. President Barack Obama called for a prompt, impartial and transparent investigation to ensure those responsible were brought to justice for the "vicious killing." 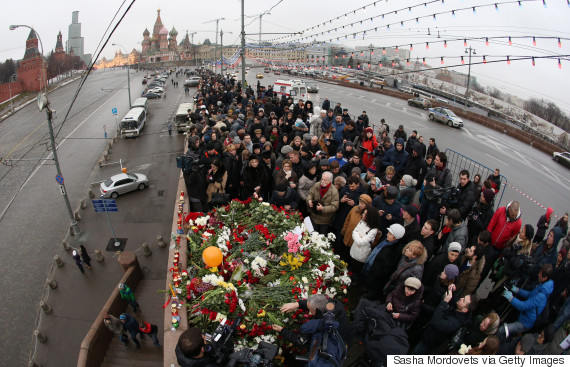 Some opposition figures blamed the Kremlin directly. Others depicted Russian society as in moral decline, describing an environment where Putin demands total loyalty and supporters go to great lengths to do what they think may please him.

"In Putin's atmosphere of hatred and violence, abroad and in Russia, bloodshed is the prerequisite to show loyalty, that you are on the team," another opposition leader, former world chess champion Garry Kasparov, said on Twitter.

"If Putin gave (the) order to murder Boris Nemtsov is not the point. It is Putin's dictatorship. His 24/7 propaganda about enemies of the state."

Nemtsov, who had been out walking on Great Moskvoretsky Bridge after a meal in a restaurant by Red Square, had said in a recent interview he was concerned that the president might want him dead over his opposition to the conflict in Ukraine.

Sunday's opposition march is intended to protest against the war in east Ukraine, where pro-Russian rebels have seized a swathe of territory. Kiev, the West and some Russians accuse Moscow of sending troops to support the rebels, an accusation Russia has repeatedly denied.

Tall, with a mop of black curly hair that had started to turn grey, Nemtsov often dressed casually in big sweaters and was known for booming speeches criticizing Putin at rallies. 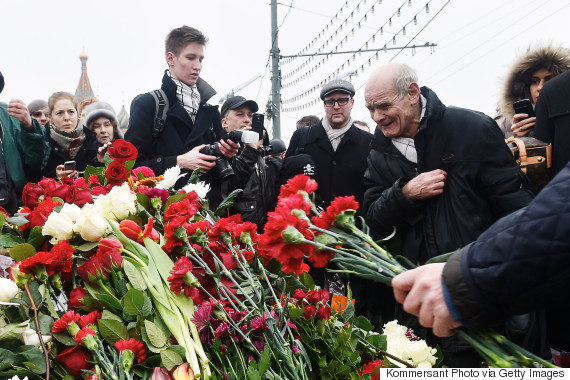 Organizers of Sunday's march were divided after Nemtsov's death over whether to hold the rally or turn it into a demonstration of mourning in central Moscow. Some feared it could end in violence if police acted with a heavy hand.

Police said they were following several lines of inquiry, including a possible attack to destabilize the political situation in Russia or an attack by radical Islamists on a well-known Jew, but political murders often go unsolved in Russia.

Nemtsov's criticism of Putin won him support among Moscow's intellectuals and the nascent middle class but he had little support outside the big cities.

Another opposition figure, Ksenia Sobchak, said Nemtsov had been preparing a report on the presence of Russian troops in Ukraine.

Nemtsov was a fighter against corruption. In other reports, he condemned overspending on the 2014 Sochi Winter Olympics by the Russian authorities and listed the many state buildings, helicopters and planes that Putin has at his disposal.

He was also one of the leaders of the rallies in the winter of 2011-12 that became the biggest protests against Putin since he first rose to power in 2000.

Nemtsov briefly served as a deputy prime minister under President Boris Yeltsin in the late 1990s, when he gained a reputation as a leading liberal economic reformer.

The opposition has failed to dent Putin's popularity even though many people feel the pain of Western economic sanctions over Ukraine, low oil prices and poor economic management.

Opposition blogger Alexei Navalny is serving a 15-day jail term, preventing him attending Sunday's march. Kasparov is based in the United States and former oil tycoon Mikhail Khodorkovsky, freed in late 2013 after a decade in jail, lives in Switzerland.

Some opponents say they fear for their lives. Anna Politkovskaya, an investigative journalist, was shot dead outside her Moscow apartment on Putin's birthday in 2006. The person who ordered the killing has never been identified. (Additional reporting by Vladimir Soldatkin, Denis Dyomkin, Polina Devitt and Thomas Grove, and by Roberta Rampton in Washington; Writing by Timothy Heritage; Editing by Elizabeth Piper and Janet Lawrence)