For all of the discussion of the shooting down of a Russian bomber by the Turkish Air Force one important fact seems to have been overlooked. If you study a map of the border region in which the event occurred it seems fairly obvious that Russian military planners realized before they ordered the mission that a violation of Turkish airspace was required if the targets assigned were to be hit.

There was virtually no approach that a jet aircraft could have taken to hit the rebel positions on Turkmen Mountain that did not involve a high probability of violating Turkey's airspace. The approach chosen by the pilots was clearly a deliberate violation, crossing a narrow corridor of Turkish territory that extends well south of the rest of the border in order to strike positions of the Turkmen Assembly from the south east. 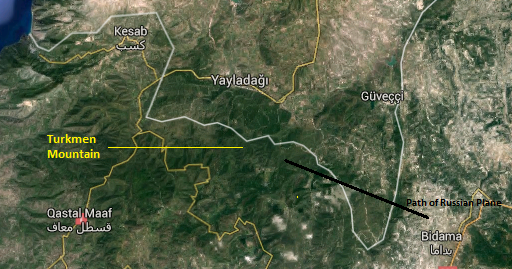