Plunging oil prices and economic sanctions have pushed Russia's economy to the brink of collapse. "Couldn't happen to a nicer dictator than Vladimir Putin," you might be thinking, but it could have repercussions for all of us.

Russia's currency, the ruble, crashed to record lows against the U.S. dollar on Tuesday, accelerating a months-long selloff. Russia's central bank jacked up interest rates in the middle of the night, desperately trying to stanch the bleeding by enticing investors to keep cash in the country. The bank raised its key rate to 17 percent from 10.5 percent, the biggest hike since Russia's ruble crisis in 1998. If that effort did any good, it was hard to tell. (Story continues below chart.) 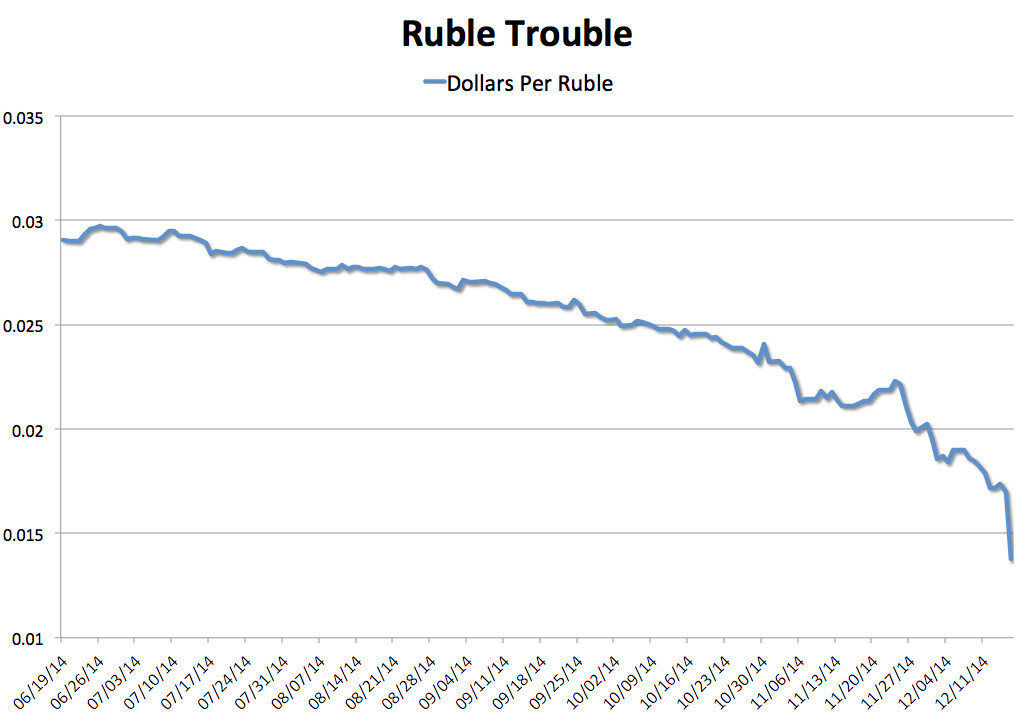 How many dollars a ruble will buy? Not many.

The central bank's failure means it will have to keep trying, either by raising rates again or potentially by cracking down on the flow of capital out of the country. Neither option is good, as they can stifle borrowing and economic growth, which was already in deep trouble.

Russian GDP might shrink by a terrifying 4.5 percent next year, the central bank said Monday, especially if the price of crude oil hangs around $60 a barrel.

Oil traded around $54 a barrel in New York on Tuesday, after free-falling from nearly $100 a barrel in August. Russia is the world's second-biggest oil exporter after Saudi Arabia. The oil price crash has starved the country of a major source of economic power. Throw in Western sanctions over Putin's adventures in the Crimea and Ukraine, and the Russian economy has ground to a halt.

The 1998 crisis brought down hedge fund Long Term Capital Management, which shook the entire financial system. The Federal Reserve had to ride to the rescue of LTCM, recruiting banks to bail it out. The current ruble collapse is starting to look worse than the 1998 debacle: (Story continues after chart, which is courtesy of tradingeconomics.com)

The long-term history of the ruble vs. the dollar. This chart is the inverse of the first chart, measuring how many rubles one dollar will buy. The higher the line, the stronger the dollar and the weaker the ruble.

So far we don't know that anybody has bet so big on the Russian ruble that it could bring down the whole system. Then again, it's early yet. In 1998, Russia's central bank raised its key rate to 150 percent, notes Joseph Cotterill of the Financial Times. The current situation has a way to go before it gets that desperate. And you never know if and where contagion will spread. In 1998 it was a big dumb hedge fund. In 2014-15 it could be a bunch of European banks, already in not-so-great shape after a succession of various crises.

Anxiety about oil prices and Russian instability is starting to rattle U.S. stocks, which have fallen in five of the last seven trading days. Market angst, if it gets carried away or goes on for too long, can hurt economic activity.

The selling in America has been tame so far. Economists expect the U.S. to hold up despite lousy economies all over the world, from Japan to China to Russia to Europe. Lower oil prices will help the economy. But the side effects can be scary.