Since the Syrian uprising began last March, Syrian security forces have killed at least 5,000, according the United Nations. Most of these were unarmed protestors. Many thousands more people have been imprisoned without trial, and torture of prisoners is widely reported.

As a response to the repression of protestors, the European Union last May imposed an arms embargo on Syria. Despite this, in the past week, a ship of arms from Russia has been allowed to trans-ship through the Cypriot port of Limassol en route to the Syrian port of Tartus on the MV Chariot (you can read the story here and here).

Cypriot authorities should have seized the shipment, which Cypriot customs officials said contained ammunition, because of the embargo. However, the government simply decided to accept the ship operators assurances that the ship would not continue to Cyprus, but go to Turkey instead. Of course, once at sea it headed straight for the port of Tartus in Syria and offloaded its cargo of ammunition and other goods -- which the owners simply categorised as 'dangerous'.

At the same time, news emerged that the Iranian Revolutionary Guard Corps has been sending illicit shipment of arms in trucks through Turkey and into Syria. One shipment in four trucks was seized by Turkish authorities.

Iranian authorities have denied the reports, which if true would breach a UN embargo which bans Iran from importing or exporting weapons. 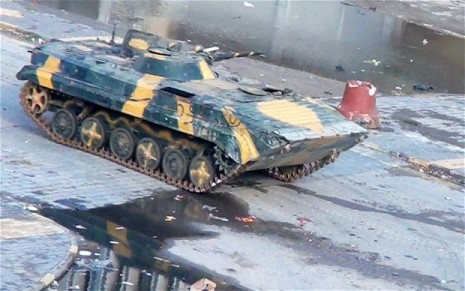 A tank patrols the streets of Homs Photo: GETTY IMAGES

It is deeply regrettable that two countries would seek to arm the government of Syria while it is virtually waging war on its own people, sending tanks and troops into cities to kill innocent civilians. However, this is something we see time and again. These cases highlight the need for a robust and comprehensive set of global rules to control the international trade in arms, and to allow legal enforcement of such rules across the board.

This is the purpose of the Arms Trade Treaty (ATT), due to be completed this July at the UN in New York.

With an ATT in force, Russia would have been clear that shipments of ammunition to states committing serious violations of human rights (as Syria is) are forbidden under international law. Cyprus would have been under a clear and enforceable obligation to prevent the shipment. Unfortunately, there is no EU mechanism to enforce embargos, this job is left to member states themselves -- a system that clearly failed in the case of the Chariot.

With an Arms Trade Treaty (ATT) in force the law would be clear and straightforward, with none of the loopholes and gray areas that exist at present. States party to the treaty would hold each other to account at regular meetings and review conferences. Civil society would have recourse to courts to enforce the will of the international community in upholding humanitarian standards.

No one could argue that shipping arms to those who murder their own citizens was permissible, as Russia, Iran and Cyprus have all done this week.