BEIRUT -- Russia believes that it sees the situation of the Middle East very plainly. Vladimir Putin sees nation-states across the region weakening and eroding: Iraq fractured, Syria in conflict, Lebanon without a state, Yemen in anarchy, Libya in chaos -- North Africa in general is vulnerable -- Saudi Arabia seized by multiple crises. Unless the Islamic State and its Wahhabi allies are stopped -- and stopped decisively -- the region is in danger of descending into even deeper chaos. Syria is Russia's veritable front line. Russia recalls how, after the Afghan war, radical Wahhabi-style Islam spread out from Afghanistan and reached up into Central Asia. Russia also recalls how the CIA and Saudi Arabia inflamed and used the Chechen insurgency to weaken Russia.

Why Syria? Is it because of Russia's interests there? No, it is because Syria has an effective leadership and an army that is already engaged in the war against Wahhabism. In effect, Syria is the pivot around which this "war" will turn.

But equally, President Putin shares the perception of many in the region that America and its allies are not serious about defeating ISIS. And sensing that the West was finally about to be lured by Turkey toward a no-fly zone -- which would only end, as it did in Libya, in chaos -- Putin played his surprise hand: he entered the war on "terrorism," blocked Turkey's project to "re-Ottomanize" northern Syria and challenged the West to join with him in the venture.

Putin -- and Assad -- say that the jihadist dominance is what actually precludes the possibility of a political outcome.

In so doing, he has very evidently kept the door open to the U.S. -- inviting it repeatedly to join him, though perhaps expecting that the U.S. initially would have to back off -- because of its ties to the Gulf.

Putin's strategy for Syria is essentially that a political settlement would not be forthcoming by simply herding sworn enemies into a room together in Geneva. The earlier U.S. precondition that Assad's ouster was mandatory before talks gave zero incentive for the opposition to seriously negotiate any sharing of power with the state: rather, they simply had to wait upon the U.S. and its allies to hand them a vacated state on a silver plate.

Putin, on the other hand, has calculated that a political settlement can only be effected by force of arms: the dominant, noxious influence of the jihadists has to be excised before "reconcilables" (in Rumsfeldian terminology) will have the confidence to offer themselves for participation. In short, whereas the West sees Russian force of arms as somehow inimical to a political settlement, Putin -- and Assad -- say that the jihadist dominance is what actually precludes the possibility of a political outcome.

Putin's recent invitation to President Assad to visit Moscow seems to have been designed to underline two things: that President Assad is indeed committed to political reform and to debunk any thought that Russia might see President Assad as somehow a discretionary, discardable component to a political solution. 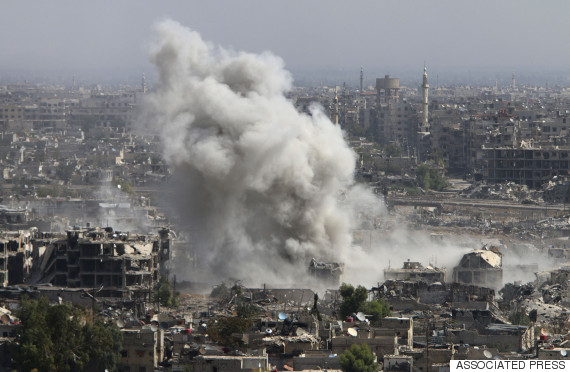 Smoke rises after shelling by the Syrian army in October in Damascus, Syria. (Alexander Kots/Komsomolskaya Pravda via AP)
Advertisement

It seems for now that the U.S. administration will leave the heavy lifting in Syria to Russia. It will wait and watch whilst corralling an international coalition to pressure Russia to respect its interests in any political outcome. What seems, at present, to be inadequately appreciated in some quarters in the West is how credible and effective use of airpower, combined with the large, combat-experienced ground force that presently is being amassed, will alter facts on the ground. These facts, in turn, will dramatically alter the political equation. Quietly, the U.S. will probably expand its cooperation with Russia. It seems probable that President Putin expects no more than this at this stage. But if Syria is a success, he may hope that a Western partnership will subsequently flower when it comes time to turn to Iraq.

But the risk in all this is that the West will turn against Putin -- that perceptions will become locked in terms of the binary "liberal/illiberal" Cold War meme.

Then the meaning of Putin's Syria initiative will be lost, and escalated hostilities will ensue. Putin is not just forcing the Syria issue for Western policymakers. He is trying to force the issue of Russia's place in the world today, to burst free from the paradigm of post-war thinking in which Russia has found itself trapped. It is a gamble, because the gesture itself -- if successful -- will shape the Middle East and global geopolitics much more widely.

Putin is forcing the Syria issue, but he is also offering America a way out from the inevitable escalation with both Russia and China in the event of a new U.S. president being elected on a 'strongman' ticket.

If it fails, the prevalent American domestic dynamics are that the U.S. is inevitably heading toward confrontation with Russia -- and with China. Too much homework has been invested in this China-Russia rapprochement by the latter for it to be easily unpicked by reverting to the old Kissinger triangulation doctrine of keeping Russia and China at odds with each other.

Putin is forcing the Syria issue, but he is also offering America a way out from the inevitable escalation with both Russia and China in the event of a new U.S. president being elected on a "strongman" ticket. And his initiative has given a profound shock to the Western military establishment. Russia had been presumed to lag behind the West in terms of conventional weaponry and its air platforms; that its military was somehow second class. But what also has become apparent in Putin's Syria gesture is the revolution that he has wrought in terms of reorganizing Russia's armed forces and upgrading its weapons since the war in Georgia in 2008.

As Pepe Escobar recently noted, Russia has shown that it has not just caught up, but has possibly overtaken the U.S. in terms of missile technology, and that it has the ability to jam NATO command and control and guidance systems -- again on display in Syria:

The New Great Game in Eurasia advanced in leaps and bounds last week after Russia fired 26 cruise missiles from the Caspian Sea against 11 ISIS/ISIL/Daesh targets across Syria, destroying all of them. These naval strikes were the first known operational use of state-of-the-art SSN-30A Kalibr cruise missiles.

All it took for the Pentagon was a backward look over the shoulder at the flight path of those Kalibr missiles [which fly at an altitude of less than 100 meters] -- capable of striking targets 1,500 km away. Talk about a crisp, clear, succinct message from Moscow to the Pentagon and NATO. Wanna mess with us, boy? With your big, bulging aircraft carriers, maybe? [...]

The Pentagon is apoplectic because this display of Russian technology revealed the end of the American monopoly over long-range cruise missiles. Pentagon analysts were still working under the assumption their range was around 300 kilometers.

If the 4+1 coalition -- Russia, Iran, Iraq and Syria, plus Hezbollah -- persists beyond Syria (with China hovering supportively behind), all those U.S. military bases and aircraft carriers surrounding Iran and planned for Eurasia become not only redundant -- they become vulnerable hostages. NATO can no longer even count on automatic air superiority. No wonder the U.S. has withdrawn its carrier from the Persian Gulf.

Putin's message on Syria therefore holds a centrality that goes well beyond the issue of whether some Syrian moderates were or were not killed whilst cooperating with Jabhat al-Nusra, Al Qaeda's Syrian branch, and the details of any transitional government in Syria. These are, as it were, the microcosm: Russia's military intervention intended to kick-start a political settlement. The macrocosm is Putin's repeated invitation to de-conflict with the West -- an offer underlined by surprising NATO with Russia showing its sizable new big stick.

This is the existential question being posed by President Putin: How may the U.S. manage the ending of its unipolar reign? Can Washington adjust to the insistence of the "non-West" to its right to be non-Western, in its manner of being? Can Wall Street adjust to the insistence of these states to "re-sovereignize" their economies from the reach of U.S. geo-financial hegemony?

Putin is not just forcing the Syria issue for Western policymakers. He is trying to force the issue of Russia's place in the world today.

The challenge to U.S. preeminence is as profound as that which faced Britain after World War II, when it was met with similar demands from its colonies on their right to aspire to their own place in the world. It was not well managed then, and resisted bitterly internally within Britain. Putin's outreach over Syria and Iraq should be understood -- beyond the issue of Syria itself -- as the offering of a path out from this confrontation with China and Russia that otherwise must ensue were America somehow not come to acknowledge new realities and differing visions of the future.

If this is not grasped, Mr. Putin understands that America, by default, will have set itself upon the road to confrontation with Russia and China. Perhaps we should take the news of Iran's possible inclusion -- an icon of the rights of the non-West to be non-Western -- in the Paris talks on the future of Syria as a positive signal that President Obama does indeed sense this need, and is proceeding cautiously (given the domestic constraints) to this end.

Thus the outcome in Syria will shape many, many things.