BEIRUT -- As soon as Russia launched the first stages of its military campaign in Syria, world media erupted with epic slights on President Vladimir Putin and the deprecation of Russia's strategic motives in Syria. Is this information operation simply a recrudescence of Cold War neuralgia, or is there something more profound at work here?

One can see, too, that the U.S. administration's response to Russia's initiative has oscillated uncertainly. Initially, Washington took a "business as usual approach," suggesting that it and its allies' air campaign would proceed unchanged. But the administration then seemed blindsided by the speed and extent of the Russian action. Last week, a Russian official arrived at the U.S. embassy in Baghdad to announce the immediate start to the Russian air operation in Syria, and to insist that the U.S. keep its aircraft (and personnel) out of Syrian airspace altogether that day. Since then, the Russian tempo of air attacks has been impressive, leaving little or no space to others.

Clearly, "business as usual" in these circumstance was impractical (if some calamitous air incident in the Syrian skies was to be avoided). And President Obama's opponents immediately pounced: Putin was wrong-footing America (again). Secretary of State John Kerry hotly demanded military coordination that would at least keep the U.S. coalition flying -- and in the game. 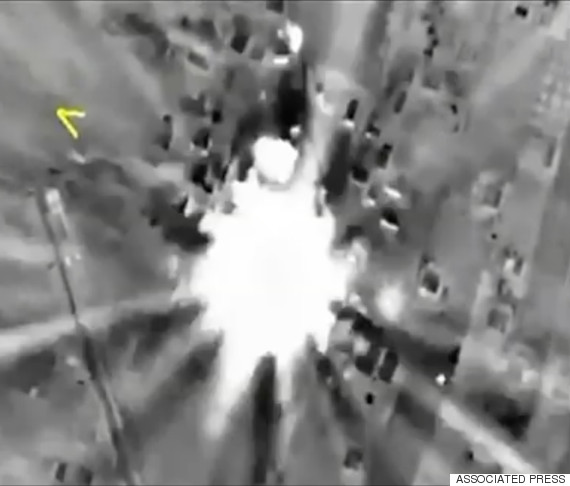 The second approach has been to try wrest at least the political initiative back into American hands -- by conceding to Russia its military role -- whilst trying to set parameters (essentially President Bashar al-Assad's removal), that would require a major reworking of the Syrian leadership, in which America would have a major say. (Britain and France similarly lifted a leg, to mark their territory of having a claim in any final outcome, too.)

During all these maneuvers and rhetorical skirmishing, however, the U.S. has also been quietly re-positioning itself towards the political settlement which it now sees as coming somewhat into focus. In London and Berlin, Secretary Kerry modified the U.S.'s initial absolute objection to President Assad remaining in office: Now, he said, Assad might remain for a transitional phase, however long that might be, "or whatever," adding that ultimately this was for the Syrian people to determine (see our last Weekly Comment). On Wednesday, Kerry went further, and said something equally significant: Exiting his discussions with Russian Foreign Minister Sergey Lavrov, Kerry said that Syria must remain "united ... [and] be secular." This represents a huge (if barely remarked) shift: It cuts the ground from under the Muslim Brotherhood as well as the jihadists -- in fact, from all Islamists who cannot accept a secular state, which, to be clear, effectively removes pretty well all the Gulf protégés from having any significant slice of the cake.

No doubt, Lavrov had made it plain to Kerry that Assad has told the Russians that he is open to political change and to reform (and that Russia believes him). But perhaps Lavrov also explained why the particular historical circumstances of Syria voided any prospect of a Brotherhood insertion into government being a workable prospect. In any event, Kerry changed tune. 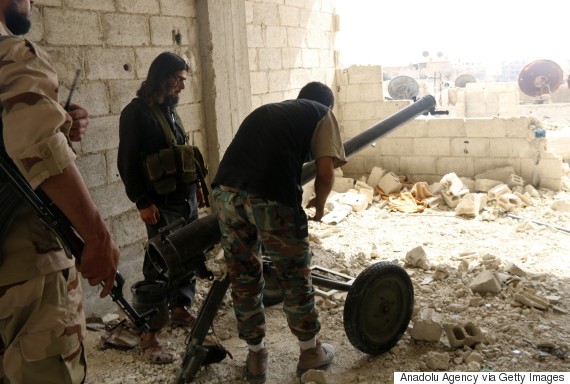 The third U.S. tactic seems to be "containment" -- that old standby: a massive information war is underway to suggest that the Russians committed themselves only to attack ISIS, and nobody else (when Russia never made any such undertaking). Lavrov is explicit: Russia is targeting ISIS and "other terrorist groups," as they had always "said they would do." Nonetheless, the info war campaign continues in order to put pressure on Russia, and to contain its military campaign. American officials have been on record saying that "moderates" turned out to be as rare as mythical unicorns amongst the Syrian armed opposition, and that only "four or five" were in the field now -- and yet suddenly it seems that there are all these "moderate CIA trainees" under attack now. In fact, there are no "moderate jihadists." The term is an oxymoron: there are only jihadists who are more -- or less -- close to ISIS or al Qaeda. It is a parsing of definitions that simply does not interest Russia.

Tom Friedman puts a somewhat different gloss on events from his well-briefed perspective: Let Putin and his allies have a go at defeating ISIS (and good luck to them). But when they fail, and find the Sunni world has turned against them, then they (the Russians) will need a ladder out of the tree, which only Washington will be able to lend, to help Putin recover from his strategic mistake. This is too reductive. Putin well understands the difference between traditional Sunni Islam in the Levant and the very recent blow-in of militant Gulf Wahhabism, which is at odds with this traditional Sunni Islam of Syria and Iraq. He knows, too, that many Sunnis still hold to the notion of citizenship within a secular, or non-sectarian state; and that Syria and Iraq are both inheritors to venerable, old civilizations (Greater Syria and Mesopotamia); each with their own political cultures and visions. The fight against contemporary orientations of Wahhabism has never been the reductive struggle between a Shia minority (the Alawites) and a Sunni majority; it is as much a struggle to preserve the Levantine tradition against a foreign (Gulf) culture, Wahhabism, floated into the region on a tide of petrodollars.

There are no 'moderate jihadists.' The term is an oxymoron: there are only jihadists who are more -- or less -- close to ISIS or al Qaeda. It is a parsing of definitions that simply does not interest Russia.

So what are the Russians doing? Firstly, they are running through a "bank" of "terrorist" targets assembled by Syrian, Russian, Iranian and Hezbollah intelligence services. It is unlikely that this phase will last long -- and then, the mode will smartly change. With the primary targets destroyed, the ground offensive will begin, led by the Syrian army (with direct support from Hezbollah, and with advice from Russian and Iranian officers). What will be different now, however, is that the ground forces will have the benefit of all-weather and nighttime air support, plus real-time imagery. Whilst Russian soldiers will not be directly involved in boots-on-the-ground operations in support of the Syrian army, Russian forces will be directly involved in securing a safe area around their air base near Latakia. To the extent that this keeps Latakia secure, it will as a byproduct, free up the Syrian army from the need to station troops there, thus making them available for other tasks.

For now, the Russians seem (as evidenced by their airstrikes) to be intent firstly on eliminating any hostile threats adjacent to their forces in the area of Latakia (the Russian air base is located some 20 miles south of Latakia). This is standard military modus operandi. Their secondary and tertiary objectives seem to be to secure the M4 highway between Latakia and Aleppo (targeting pockets of insurgent forces adjacent to the highway), and in striking insurgent-held areas along the M5 highway.

There is nothing political behind such strikes -- in the sense of strengthening one insurgent group in opposition to any other. It seems, rather, very clear that the Russians are preparing for the subsequent ground sweep by the Syrian army: the Russian air force is securing lines of logistic support to the Syrian army, and concomitantly denying those same lines to the jihadists. It is, in short, all rather military -- and in line with what Russia says are its objectives.

So, why this flood tide of snide commentary, disinformation and claims of a covert, "underhand" Russian strategy? What is it that so irks the West? Well, of course, one part of it is that Putin has put Washington on the spot, and made the West's claims to have been fighting ISIS for the last year to appear hollow. But there may be more to it than this. 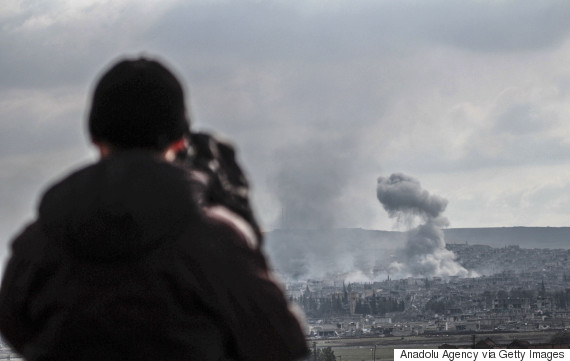 For the past few decades, NATO effectively made all the decisions about war and peace. It faced no opposition and no rival. Matters of war were effectively a solely internal debate within NATO -- about whether to proceed or not, and in what way. That was it. It didn't matter much about what others thought or did. Those on the receiving end simply had to endure it. But whilst its destructive powers were evident, its strategic benefits have been far from evident -- especially across the Middle East.

What probably irks the West most is that Russia has unfolded -- and begun -- a sophisticated military campaign in the flash of an eye. NATO bumbles along much more slowly with its complicated structures. Iraqis have long complained that in military terms, assistance promised by the NATO powers takes (literally) years to materialize, whereas requests to Russia and Iran are expeditiously met. So Tom Friedman's condescension towards the Russian military intervention does have more than a whiff of orientalism to it.

But all the hoo-ha probably stems also from the sense that this Russian initiative could mark the coming into birth of something more serious -- of the Shanghai Cooperation Organization as a putative military alliance. Admittedly, the "4+1 alliance" -- Russia, Iran, Syria and Iraq, plus Hezbollah -- is not branded as SCO (and the coalition partners do not overlap with SCO membership), but the 4+1 alliance venture might well yet prove to be a "pilot" in non-Western, successful coalition-operating. Furthermore, its objective is precisely to preempt NATO-style regime change projects -- a prime SCO concern. This prospect certainly would irk the Western security establishment -- and would potentially change many an existing NATO calculus.

Not surprisingly, then, it might be seen in some Western quarters as hugely important to set a narrative of failure for the 4+1 alliance, and to denigrate any sense that its military example might have strategic importance for the non-Western world.