VOLGOGRAD, Russia, Dec 30 (Reuters) - A bomb blast ripped a trolleybus apart in Volgograd on Monday, killing 14 people in the second deadly attack in the southern city in two days and raising fears of further violence as Russia prepares to host the Winter Olympics.

The morning rush-hour bombing, which left mangled bodies in the street, underscored Russia's vulnerability to militant attacks less than six weeks before the Sochi 2014 Games, a prestige project for President Vladimir Putin.

Sunday's blast came less than 24 hours after a suicide bomb blast killed at least 17 people in the main railway station in the same city, a major transport hub in southern Russia.

A Reuters journalist saw the blue-and-white trolleybus reduced to a twisted, gutted carcass, its roof blown off and bodies and debris strewn across the street. Federal investigators called the blast a "terrorist act".

"For the second day, we are dying. It's a nightmare," a woman near the scene said, her voice trembling as she choked back tears. "What are we supposed to do, just walk now?"

The consecutive attacks will raise fears of a concerted campaign of violence before the Olympics, which start on Feb. 7 in Sochi, about 430 miles (690 km) southwest of Volgograd.

In a video posted on the web in July, the leader of insurgents who want to carve an Islamic state out of the North Caucasus, a string of Muslim provinces south of Volgograd, urged militants to use "maximum force" to prevent the games from being held.

"Terrorists in Volgograd aim to terrorise others around the world, making them stay away from the Sochi Olympics," said Dmitry Trenin, an analyst with the Moscow Carnegie Centre.

A female suicide bomber from the North Caucasus killed seven people on a bus in Volgograd in October.

A spokeswoman for the International Olympic Committee in Lausanne, Switzerland, said: "Our condolences go to all those affected by today's bombing in Volgograd. Unfortunately, terrorism is a global phenomenon and no region is exempt, which is why security at the Games is a top priority for the IOC. At the Olympics, security is the responsibility of the local authorities, and we have no doubt that the Russian authorities will be up to the task."

In power since 2000, Putin secured the Games for Russia and has staked his reputation on a safe and successful Olympics, even freeing jailed opponents including oil tycoon Mikhail Khodorkovsky and the Pussy Riot punk band to remove a cause for international criticism at the event.

Putin was first elected after winning popularity for a war against Chechen rebels, but attacks by Islamist militants whose insurgency is rooted in the war have clouded his 14 years in power and now confront him with his biggest security challenge.

There was no immediate claim of responsibility for either of the Volgograd attacks, which left dozens wounded in addition to the deaths. Health Ministry spokesman Oleg Salagai told Rossiya-24 TV that 14 people were killed in the attack and 28 wounded.

Putin ordered law enforcement agencies to take measures to enhance security after Sunday's attack when a bomber detonated explosives in front of a metal detector at Volgograd station.

Police said additional officers were being deployed to railway stations and airports nationwide, but the attacks raised questions about the effectiveness of security measures.

The police force in Volgograd has been depleted in recent months as some 600 officers were redeployed to Sochi to tighten security around Olympic sites, a local police officer told Reuters.

More attacks can be expected before the Olympics and cities in southern Russia where the Games are not being held are easier targets than Sochi, said Alexei Filatov, deputy head of the veterans' association of the elite Alfa anti-terrorism unit.

"The threat is greatest now because it is when terrorists can make the biggest impression," he said. "The security measures were beefed up long ago around Sochi, so terrorists will strike instead in these nearby cities like Volgograd."

Monday's blast was so powerful it blew out the third-story windows of a nearby apartment building, and witnesses said passengers were flung from the bus by the blast.

"We ran outside. There was smoke and people were lying in the street. The driver was thrown far. She was alive and moaning ... Her hands and clothes were bloody," said Olga, a clerk in a shop near the scene of the blast.

A city of about 1 million, Volgograd is one of the venues for the 2018 soccer World Cup, another high-profile sports event Putin has helped Russia win the right to stage, and which will bring thousands of foreign fans to cities around Russia.

Sunday's attack was the deadliest to strike Russia's heartland since January 2011, when a male suicide bomber from the North Caucasus killed 37 people in the arrivals hall of a busy Moscow airport.

Investigators initially said a woman set off the bomb that filled the front of the railway station building with a massive orange fireball on Sunday, but later said the bomber could have been a man. (Additional reporting by Alissa de Carbonnel; Writing by Steve Gutterman; Editing by John Stonestreet and Will Waterman)

We stand with the #Russian people against terrorism and condemn in strongest terms the attack in #Volgograd http://t.co/UkKE83qQeT 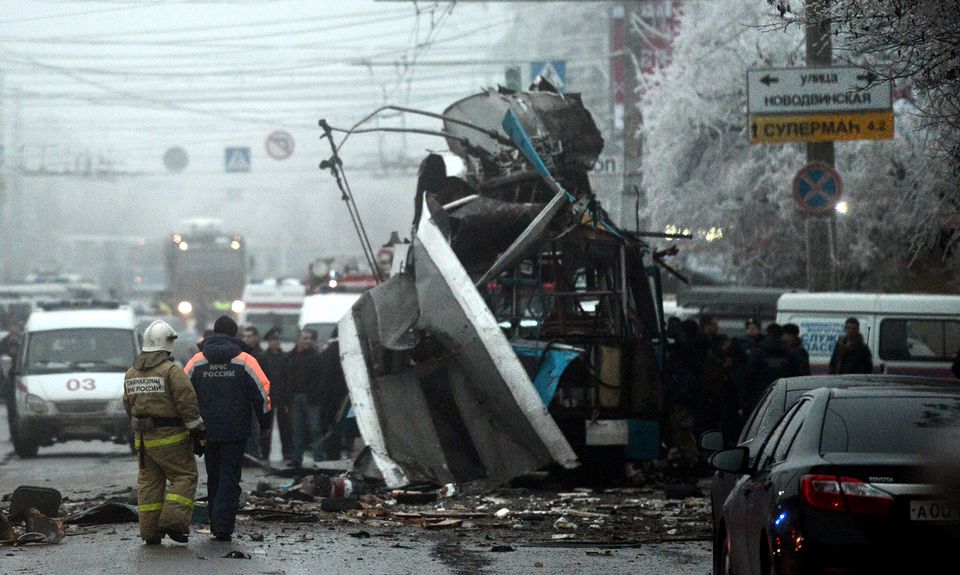