One group of UFO believers have packed their bags, tents, photo and video cameras and are on a cross-country trek in Russia, hoping to capture photographic evidence of possible alien activity, reports todaysthv.com.

Dubbed the "Trans-Eurasian UFO-Search Expedition," the 50 participants have been watching the skies above the southern tip of Lake Baikal, the world's oldest and deepest fresh water lake, located in southern Siberia.

Lake Baikal was one of the group's first UFO target areas, based on local news of UFO sightings.

"Here in 1958, there was a TU-154 airplane crash. There were some reports from the locals that a UFO pursued the aircraft until it reached Baikal waters right here," expedition member Vladimir Kuznetsov said. "And there were frequent reports of UFO activity around Baikal.

"This is the reason why we decided to meet here. I hope that we will be lucky enough to shoot something interesting," Kuznetsov added.

The expedition is using various pieces of equipment in their quest to find UFOs, like this universal abnormal activity detector, pictured below. 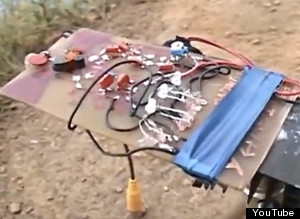 "(With this device), we can monitor the sky, the objects there and can estimate them depending on the levels of the indicators," said Kuznetsov.

So far, two of the team members claim to have filmed a UFO.

"At first the object did not move, but it had a peculiar glow, flashing with different colors -- blue, red, yellow, green -- and a few minutes afterwards, the object began to move chaotically, not like a helicopter or a plane or any other terrestrial machine which can fly," according to Andrey Chernobrov.

The Trans-Eurasian UFO-Search Expedition got off the ground last month in the Sea of Japan near Vladivostok, Russia, and will end in Moscow in September.

July produced numerous UFO videos from around the world. While they're considered unidentified, it's still not known exactly what many of these objects are.

Check out this video captured over South Korea on July 26.

And here's one taken in Brisbane, Australia on July 30.

If you're hungry for even more UFO videos, here's a collection featured in HuffPost stories since the beginning of 2012.

PHOTO GALLERY
A Gallery of UFO Videos From Around The World
Download
Calling all HuffPost superfans!
Sign up for membership to become a founding member and help shape HuffPost's next chapter
Join HuffPost

UFO Hunters Search For Aliens In 2-Month Expedition Across Russia
A Gallery of UFO Videos From Around The World
1 / 17
UFOs Over Michigan -- Jan. 10, 2013
This changing sequence of lights was seen over Warren, Mich., on Jan. 10, 2013, moving in patterns similar to balloons or lanterns.
LUFOS.net / YouTube