@roskomnadzor's response: sorry, we are not in the market and the demography is not a commodity.

This is not the first time demography has reared its sexy head in debates about public morality. Concerns about Russia's birth rates are a popular weapon in the homophobic arsenal as well. Just look at some of the statements made by Russia's most famous legislative crusader for sexual propriety, Elena Mizulina. To those who haven't heard of her, one might describe Mizulina as the love child of Margaret Thatcher and Dolores Umbridge, but imagining Mizulina's two mommies probably violates the gay propaganda law. As Mizulina told Vladimir Pozner, banning "gay propaganda" is not just a matter of values, but also of ensuring the existence of subsequent generations: "Well see if there'll be such a high birth rate in France after the legalization of same-sex marriage."

Let's Meet and Have a Baby Now 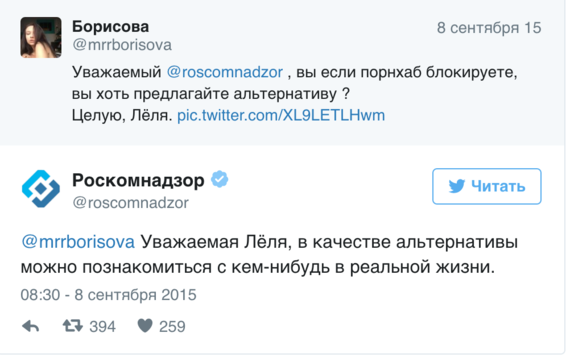 The saddest part of this story is that the guardians of morality and demography are missing a real opportunity. Here we might recall a short story written by Yulii Daniel (Nikolai Arzhak) in the 1960s: "The Man from MINAP." A man named Volodya catches the attention of the authorities for his numerous sexual partners. It turns out that Volodya can guarantee the pregnancy of any woman he sleeps with. Not only that, he can even determine the sex of his offspring: if his partner wants a boy, then, during sex, he pictures Karl Marx. If she wants a girl, he thinks of Klara Zetkin.

Why not update the story for today's era of traditional values and "spiritual braces"? If "The Man from ANTIFAP" wants a son, then during sex he can picture Vladimir Putin (but not, you know, in a gay way). For a girl, just imagine Elena Mizulina (you know, like you always do).

More to the point, consider the potentially positive role that pornography could play. After all, if the demographic crisis is not about couples choosing not to have children, but rather choosing not to have sex (the only implication that makes sense in this context), then shouldn't we treat Russian couples with the same care that zookeepers take with reluctant pandas? Clearly, this is a job for an educational video. With a soundtrack by that fan-favorite Russian rock group, Ruki vverkh! (Hands Up!).

Since no one else seems to be volunteering for the job (Chuck Tingle is busy elsewhere), allow me to step in.

The doorbell rings. It's ROSKOMNADZOR, wearing tight shorts, suspenders, and no shirt.

ROSKOMNADZOR: Did someone order a pizza? I mean, a pirog?

VIRTUOUS YOUNG LADY: My, aren't you nice hunk of heterosexual virility? And are those spiritual braces you're wearing? That's so hot.

ROSKOMNADZOR: Thank you. I, too, admire you're beauty. And I like your scent. What is it?

VYL: It's called "Traditional Values." Hey, you seem like a nice guy. Maybe your little green man would like to invade my peninsula?

ROSKOMNADZOR: Definitely. But let us first go register our union and get married in the Church. And then we can make hot, moral love in the missionary position, with the lights turned off.

VYL: Yes! Yes! And let's be sure not to use birth control!

ROSKOMNADZOR: I agree! Nothing turns me on like the possibility of an unplanned pregnancy!

That's just a taste, Roskomnadzor. If you want more, just give me your credit card information and your date of birth. The charge will appear under the name "Putin Family Values."

It'll be our little secret