NEW YORK -- On Wednesday, about 100 activists crowded behind a police barricade across the street from the Russian consulate to protest a slew of anti-gay laws signed into Russian law just as the country prepares to host the 2014 Winter Olympics.

Russian and American gay rights activists held up rainbow-painted signs outside the Upper East Side building, chanting protest slogans. They want the Russian government to repeal the "anti-gay propaganda" law that threatens openly gay (or "pro-gay") citizens and foreigners with fines, arrests and possible jail time. The group also is pushing for a boycott of all Russian products, in particular, Russian vodka; a boycott of the Olympics in Sochi; and for corporate Olympic sponsors to withdraw sponsorship.

After a brief press conference, one of the owners of Boxers NYC, a gay sports bar, stood before the crowd as two of his bartenders emptied bottle after bottle of Stolichnaya and Russian Standard vodka onto the sidewalk. The crowd shouted "Pour! Pour!" and "We're here, we're queer, we're drinking only beer!"

According to Robert Fluet, the co-owner of the bar, before the boycott, Stoli was the No. 2 bestselling vodka at Boxers.

Val Mendeleev, CEO of SPI Group, the Luxembourg-based company that owns the brand outside of Russia, insisted in a recent interview that his is “not a Russian company" and that he disagrees with the anti-gay laws. He said he plans to make a financial donation to an unspecified group working on behalf of Russian lesbian, gay, bisexual and transgender activists, but Fluet felt that he could be doing more.

"They need to move on from trying to convince us that it's not a Russian product," Fluet said. "They have the ability to hit the phone," Fluet said, suggesting that the CEO should reach out to the Russian government and pressure it personally.

Despite ambitious goals, the protest organizers had modest expectations for the day. Yelena Goltsman, the founder and copresident of Rusa LGBT, a Russian-speaking LGBT group based in New York, said that today's event is "just a start."

"It is always a good thing to bring attention to draconian laws," she said. "Do we think that this action alone will make a dent? Maybe not, but maybe a little dent. And every little dent counts."

Similar events are coming up soon in San Francisco, Washington and other United States cities, and together, Goltsman believes they may have an impact. "The attention of the Western world, that's what's needed here," she said.

Goltsman came to the United States in the 1990s, along with millions of other Russian Jews who emigrated in the late 80s and early 90s. But most of the members of her group arrived in the states more recently, after applying for asylum. "It is impossible to be gay in Russia," she said.

In the past several weeks, Russia's new anti-gay laws have received increasing attention and a range of activist groups have advocated for boycotts of the Sochi Olympics or Russian vodka. The International Olympic Committee, for its part, released a statement saying it will "work to ensure that the Games can take place without discrimination against athletes, officials, spectators and the media."

The organizers of Wednesday's protest, however, found that far from satisfactory. "We're not looking for people at the Olympics to get special treatment," said Ann Northrop, a volunteer at Queer Nation, an LGBT advocacy group. "What about the Russian people? Really that's just elitism and separatism."

Nearby, Roman Mamonov, a Russian freelance journalist who applied for asylum and moved from Moscow to New York nine months ago, waved a small fan painted with a rainbow fist. Back home, he was threatened for years over his sexual orientation, but the final straw was returning to his Moscow apartment one day to find "Die Faggot" spray-painted on his door.

"It's really scary," he said. "But we have to speak up about our rights. I don't believe in quick results, but I think the Russian government doesn't like the bad PR. They will have to answer eventually."

PHOTO GALLERY
LGBT Protest at the Russian Consulate
Download
Calling all HuffPost superfans!
Sign up for membership to become a founding member and help shape HuffPost's next chapter
Join HuffPost 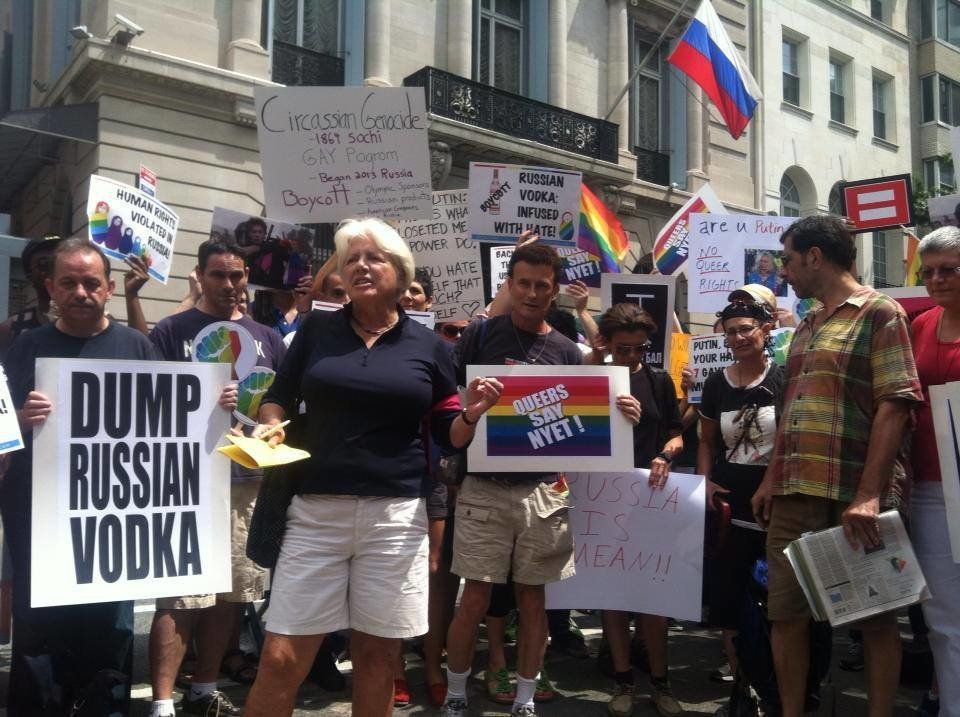