Donald Trump has collected a lovely bouquet of endorsements in his path to the presidency: Chris Christie, David Duke, Jean-Marie Le Pen, the KKK. It's the kind of praise that would make a mother proud, if your mother happened to be Leni Riefenstahl. And now he can add Russian philosopher, TV personality, and Duck Dynasty lookalike Alexander Dugin. 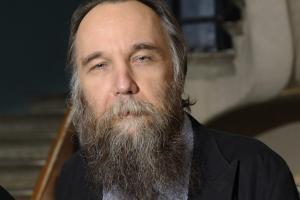 Dugin is largely unknown in the West. If non-specialists have heard of him, it is either because of exaggerated claims of his influence over Putin, or because of his 2014 suggestion of a final solution to the Ukrainian problem: "To kill, kill, kill. There should be no more conversations." By comparison, Trump's plan for building a border wall looks positively humanitarian.

Dugin's endorsement is unlikely to sway any voters to Trump's side. He doesn't just lack name recognition; simply saying his full name aloud would eat up most of the quota for syllables in the average sentence Trump shouts from his podium. But such a strong statement of support from one of the pillars of the Russian Right does confirm what has been clear to so many for so long: the nativist, xenophobic Trump is a weirdly cosmopolitan phenomenon. Trump and his European cheerleaders are a global movement against global movements, the nationalist champions of a neo-Fascist International.

Neither Putin nor Dugin publicly claim the mantle of fascism, but for different reasons. Dugin, a prolific author who excretes prose at a truly impressive rate, explicitly rejects fascism and communism in favor of what he calls the "Fourth Political Theory;" in practice, however, the distinction is a matter of splitting hairs (a prospect that Trump's famous combover makes rather daunting). Where Dugin is an ideologue, Trump is simply a demagogue: he gains nothing from invoking any organized political theory, as he benefits far more from racist dogwhistles and calls for national salvation. So on a rather simple level, labeling either of them a fascist can look more like an empty insult than a definition.

Instead, their fascism is found in their xenophobia, their appeals to a primitive notion of a national destiny, their conspiratorial myth making, and their unrelenting fear-mongering.

Since the rise of Trump has coincided with the sad news of Umberto Eco's death, the Italian intellectual's 14-point definition of fascism has been making the rounds lately. High on the list is "fear of difference," which covers both Trump's xenophobia and Dugin's preoccupation with the autonomy of the various "civilizations' he claims make up the world. Dugin's public statement of support for Trump is, of course, filled with his usual contempt for multiculturalism. After casually referring to Obama as a "black Muslim democrat," he praises Trump's opposition to an "elite" that runs American political parties: "The American elite is not even American." Not even American? Now you know what a Russian dog whistle sounds like. (hint: it sounds a lot like "Hava Nagila")

I would, however, suggest a slight modification of Eco's term. What Dugin finds attractive in Trump's program is a contempt for nuance. Trump and Dugin (along with Le Pen and Duke) are partners in a global war on ambiguity. They desperately need a world in which cultural boundaries and national borders are never threatened by outside influences.

Dugin sees in Trump an ally in the global struggle against the most pernicious force the world has ever faced: liberalism. Dugin constantly rants about what he sees as liberalism's pervasive undermining of all collective identity in favor of a destructive, nihilistic individualism. Outraged at the idea that one's nationality, religion, and even gender could be a matter of personal rather than collective choice, Dugin rejoices at the prospect of fellow travelers in other countries.

Dugin and Trump share a reflexive disdain for the sort of creative uncertainty that liberalism allows. They each want a world where people can be understood in simple, fixed categories, and where those people preferably stay in their place.

In at least a few cases, I have to agree with them: subtlety is the enemy, and simply categories must be preserved.

So it is in that spirit that I call Trump and Dugin what they really are: fascists. Nuance and ambiguity be damned.