On Sunday, December 14, Russia's biggest cities had to see one more episode of a political face-off between the democratic opposition and the government. Dissenters' Marches were planned in Moscow and in St. Petersburg. The Moscow march had been illegally banned by the authorities. They said that somebody else had applied for the same place and time before we did. It was a lie since the organizers (I was one of them) brought the application to the mayor's office on the first day and first minute when it was possible by the law. We had the official stamp and video of how it was done. But as usual, the government didn't give a damn. They've got the police, so why worry about the laws?

Yes, they've got lots of police. Riot police vans, army trucks, special prisoner transports (autozaks), heavy vehicles lined up for hundreds of meters through the city's main shopping street, Tverskaya, more of them hid in side streets. 2500 riot police from 11 regions were brought to stop the March, not to mention thousands of regular police officers and the army. Hundreds of secret service operatives had to recognize activists and organizers even before they arrived at the scene or did anything. Phones were tapped, leaders followed from their homes, some were captured in their flats that very morning. Sadly, it seemed like there was no possibility to hold an action.

But it was held. Many people went there knowing that they'd be arrested and beaten. Dozens of retired high officers, from colonels to generals, wearing uniforms with medals gathered to protest the awful government's attitude to the veterans and degradation of the Russian army. They were all arrested by the riot police, dragged violently into autozaks and held in custody for hours where the police humiliated them.

Some 90 people were arrested at Triumfalnaya Square, where the March was officially planned. Some of them, like Sergey Aksenov, went fearlessly before the police lines holding the Constitution above their heads. Others shouted slogans like "Freedom to political prisoners!" or argued with the police. Some were arrested just because they were n the secret lists of opposition activists. Two young protesters already after being arrested, managed to escape from an autozak through a car's manhole and shouted slogans from the car's roof. They were immediately assaulted by the riot police, one young man was pushed off of the roof, fell on the ground and broke his leg. The police didn't even care to call the doctor, they just put the men back into the autozak. 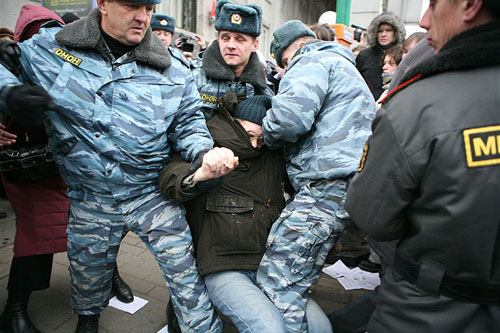 About 30 protesters organized another action right near the Kremlin. They brought the Constitution with them and wanted to get inside to present it to Dmitry Medvedev. However, Federal Guard Service met them instead of the president. 18 were arrested, several were severely beaten. More people were arrested at different spots in Moscow. Three Oborona activists got to the police right from a McDonald's restaurant together with three passersby for "holding an illegal demonstration" (right in McDonald's?!). An Oborona activist Maksim Kirsanov was arrested for standing in the street and holding a placard demanding that the government obey the Constitution.

Another group of protesters, which I joined, managed to fool the police. As the government's forces were waiting for the March at North-West of the Moscow center, 100 to 150 people gathered in South-East and marched freely through the city. People shouted "We need other Russia!", "This is our city!", "Russia without Putin!", "Freedom to political prisoners!", cars honked in support. We didn't meet a single policeman on our way, they were all waiting for us in a different place. The march lasted for some 20 minutes, its participants immediately dispersed. Riot police arrived there 10 minutes late. Nobody was arrested. 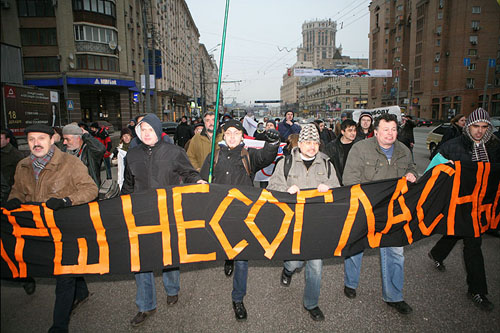 Moscow authorities appear to be outraged by the Sunday's events. Moscow mayor Yury Luzhkov has already ordered that the police "zero" the protests. He expects more social unrest as the economical crisis deepens in Russia.