Right after Putin's third term, and especially after the Maidan revolution in Ukraine followed by the Russian annexation of Crimea and the subsequent military conflict in Eastern Ukraine, the Russian authorities dramatically increased the anti-opposition campaign. They keep adopting a new restrictive legislation, have unleashed an unprecedented global disinformation war and created the atmosphere of hatred, intolerance and bigotry produced by the state-owned media.

Under these circumstances, many Russian civil and political activists have been forced to flee from Russia. For many of them the most natural and desirable destination is Ukraine. Some Russians have to move to Ukraine due to political persecution at home. Some escape to Ukraine by their own choice inspired with opportunities for change and reforms. Others go there to wear military boots and fight with Vladimir Putin's aggression.

However, if you are a Russian and even if you share a Ukrainian dream and fight for the independence of Ukraine, it doesn't mean you won't face strict emigration regulations.

According to Sergiy Gunko, the Ukraine's State Migration Service's spokesman, in 2015 eighty-six Russian citizens applied for political asylum, while only four got it. According to the statistics presented by the United Nation's Office of the High Commissioner for Refugees (UNHCR), in 2014 approximately 140 Russians applied for political asylum in Ukraine. In the first six months of 2015 this number grew by fifty people more. The number of Russians who were granted political asylum is so insignificant that it isn't even mentioned in the statistical data.

At the beginning of 2015, the Ukrainian President Perto Poroshenko expressed his concern about this problem. In February of 2015, the bill to simplify the asylum procedure for specific categories of foreign nationals was introduced in the Verkhovna Rada [Ukrainian Parliament]. The bill was supposed to ease the legalization in Ukraine for those who took part in the anti-terrorist operation (ATO) in Eastern Ukraine, as well as for those whose civil rights and freedoms were violated due to their standpoint or activities in support of Ukraine's sovereignty, territorial integrity and independence. However, it has only passed the first hearing and is on hold at the moment.

Meanwhile, the Ukrainian Migration Service does not show any desire to soften its policies without a political decision of the head of the state refusing to grant asylum to Russian political asylum seekers in the absolute majority of cases.

Here are a few examples of the most egregious cases:

Alexey Vetrov, an opposition activist from Nizhny Novgorod, Russia. He fled to Ukraine under the risk of criminal prosecution and applied for political asylum in 2014. Later, Alexey was refused to get his legal status in Ukraine. The Migration Service of Ukraine offered quite a perplexing reason for such a refusal. They ruled out Russia was a democratic country; therefore Mr. Vetrov couldn't be persecuted there. The dozens of misdemeanor charges of Mr. Vetrov for participating in anti-Putin protests were, according to the migration officials, examples of "hooliganism" and "failure to comply with lawful demands of [Russian] police officers." For 1.5 years, Mr. Vetrov has been unable to be granted asylum. Currently, he has appealed for the Migration Service's decision to the Ukraine's Supreme Administrative Court. However, the common practice of the Migration Service decision appeals shows that courts keep sending the asylum cases back for reconsideration to the same officials who had denied granting asylum in the first place.

Pavel Lyubchenkov, an activist from Krasnodar, Russia. He was repeatedly summoned to the Federal Security Service for "talks" about his public pro-Ukrainian position. He was one of the activists who organized the Kuban federalization march in Krasnodar. The organizers were charged with extremism and calls for separatism under the Russia's Criminal Code. One of the organizers, Darya Polyudova, has been sentenced to two years of the penal colony despite the Amnesty International and other organizations' support. Another organizer, Vyacheslav Martynov, was granted asylum in Ukraine. Mr. Lyubchenkov, however, was denied political asylum for three times. Later, in December 2015, the Ukraine's Ministry of Internal Affairs officials informed about an extradition request from Russia and announced their intention to arrest Mr. Lyubchenkov and transfer him to the Russian authorities.

Those Russians, who had been fighting in the anti-terrorist operation (ATO) for Ukraine, faced similar problems getting a Ukrainian citizenship. One such Russian, Sergey Petrovichev, was seriously wounded in the ATO in the late summer of 2015. Sergey's leg was amputated, in part due to the fact that he was unable to leave Ukraine for his treatment. Volunteers helped Sergey through all the stages of a citizenship procedure. However, the President of Ukraine hasn't signed the decree granting him citizenship yet. Needless to say, Sergey faces criminal prosecution in Russia.

These cases are getting more public attention by Ukrainian and independent Russian media outlets and international human rights watchdogs. Nevertheless, there hasn't been much response so far.

At the same time, on the other side of the Ukrainian border, Russia is entering the federal election cycle. It's quite easy to predict that the election campaign of 2016 in Russia will increase a constantly rising number of people running away from the Russian authorities.

This is a very urgent issue that raises two fundamental questions to address to the Ukrainian government.

The first one is humanitarian and requires the Government to prove its commitment to the European values. The Ukrainian authorities need to show their political will to help those Russian people who were supporting the Ukrainian independence in a very unpleasant and dangerous environment for such actions. They need to embrace those, who have left their homeland to join the Revolution of Dignity and who have to experience all of the "benefits" of an old-fashioned Soviet bureaucracy in an after-revolutionary Ukraine. It will require to pass a new legislation and to reform the migration authorities, which probably act this way not only with Russians, but as they haven't been reformed generally since the collapse of the Soviet Union.

And the second question is political and way more complicated to ask: are President Poroshenko and his allies ready to prove by word and deed that pro-democracy Russians are allies of Ukraine and are welcome in their country?

After a heart-breaking tragedy that happened to Vlad Kolesnikov, a Russian high school student, who was publicly supporting Ukraine, and who later committed suicide due to huge harassment from his classmates, his hurray-patriotic family, and federal media outlets, the question of need for a safe harbor for Russian activists has become as acute as ever.

Now the Ukrainian government has to decide if to make a step forward or to keep a status quo. 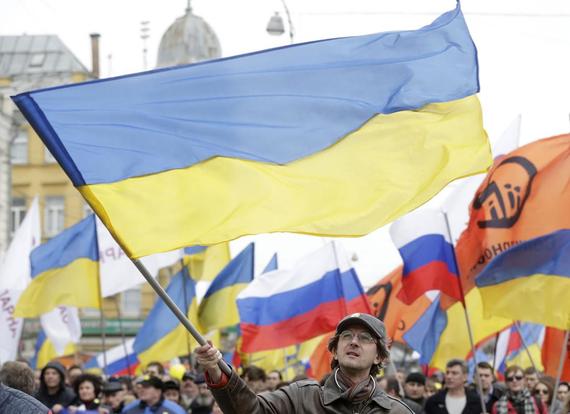