The book Russian Tattoo first grabbed my attention because of its amazingly accurate title. I instantly knew what it would be about: immigrants bearing the everlasting marks of detectible dissimilarities, symbolic tattoos of their native cultures, with negative connotations typical of our daily interactions.

An immigrant for over 20 years, I remember my first American job, in a New York global computer company that employed scores of immigrant programmers as cheaper labor. It was there that Mary, an executive assistant, took me into her confidence because I spoke better English than the majority of workers there. Mary deplored immigrants' "disgusting behaviors" and asked rhetorically and disapprovingly, "How can they be of any good if they speak such poor English?" I never felt flattered by her "uplifting" me to nearly her level, as I was aware of my own immigrant wickedness, my tattoo.

A lot of water went under the Brooklyn Bridge since then, but intolerance to such "tattooed" people, immigrants and other minorities (which make up 13.1 and 22.3 percent of the U.S. population respectively), is still a significant problem, as recent conflicts show.

We take it as universal truth that mitigating intolerance to those fellow-citizens who are not like us is a sign of a true democracy. In that sense, we still have a way to go to root out our unconscious bias, leveling the field for all compatriots of talent and goodwill. America - the beautiful, the prosperous, and the diverse - works only if it is indeed inclusive of all stakeholders. I'd like to think that our reality is drifting towards this, albeit as slow as a glacier.

While embarking on a book project about prominent immigrant women leaders, I realized that many of them are authors as well. It really came as no surprise: adrenaline-charged experiences of what I call Generation FF certainly provide unique perspectives on American opportunities, evolving values, their leadership-in-the-making, and most importantly - cultural integration as a prerequisite of success.

Remarkably, 60 percent of the 35 women I researched have taken the time to write books, aside from their primary occupations. They clearly felt the urge, the need, to share their thoughts and experiences, which is, per se, a leadership "symptom."

As much as I enjoyed learning about Isabel Allende, Ivana Trump, Edwina Sandys, Nadia Comaneci, or Paulina Porizkova, to name a few, I was spellbound by a memoir of Elena Gorokhova, one of my book subjects, because her story in Russian Tattoo launched by Simon & Schuster with a movie trailer, takes one to new heights of truly understanding the "guts" and significance of immigration.

Gorokhova definitely made it in America. A lively, intelligent girl from a modest Soviet-Russian family, she was single-handedly raised by an authoritarian mother. She evolved into a confident American professor who authored two memoirs - both rich in sensual and sensitive detail and both very popular. They describe her 24 years growing up in the Soviet Union and subsequent 30 years adapting to life in America. 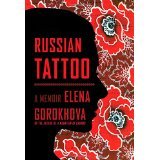 Russian Tattoo depicts the life and mentality of a young immigrant marked with a Russian tattoo she can't get rid of--or doesn't really want to--with her love, marriage, loving-detesting relationship with her mother, and Russian-American identity issues. It's about the duality of belonging to different worlds, about the eternal mother-daughter relationship and associated tensions, and about her slow integration into mainstream American culture.

I could also sense innate modesty from Gorokhova's responses to her questionnaire for my book: "I have never had a single leader quality. I am not a follower, but in no way am I a leader... I think I am pretty average when it comes to toughness or giving up." On the issue of leadership I beg to disagree with her.

I understand Gorokhova to be both a good writer and leader. Why? How about thousands of followers? Do they read her books because they have nothing better to do? Don't they identify with her anguish about detesting her overbearing mother? Presumably, they recognize her feelings of guilt remembering how she kept her mother at arm's length, never letting warmer emotions to show. Surely they feel her pain of non-healing wound in her soul sliced into two incompatible parts, Russian and American. They certainly understand her longing to find an ultimate "home". Finally, they understand her begging for forgiveness from her late mother.

Come on, Elena, you are a leader!

You are a leader if only because you've shown us how we too can do something to improve upon unfortunate circumstances. You've given us much food for thought - about the meanings of home, love, and mother's duties; about mother-daughter relationships; about cultural integration, and more.

Most importantly, in sharing your own journey of transitioning from Russian to American mentality, you provided abundant evidence that as different as all of our backgrounds might be, your journey is our journey too. We all do soul-searching; we all do the best we can bearing our own crosses, because we all have been marked with our own individual tattoos, Russian or other. We are all human, and we're all connected.

For Whom the Bell Tolls

Russian Tattoo is not merely Gorokhova's personal memoir--because all immigrants can relate to her integration anxieties, while countless other people can relate to her honestly uncovered poignant family dramas. Hemingway quoted John Donne in For Whom the Bell Tolls, "No man is an island, entire of itself" - because we are part of a bigger mankind: "and therefore, send not to know for whom the bell tolls, it tolls for thee."

This is wonderfully put; and my point is that Russian Tattoo, so profoundly sincere, gentle, and personal, also relates to each one of us, as Gorokhova rose to speak of all of us as human beings. Many could identify with her or tell a story similar to hers. But it's nearly impossible to tell it better than she did.