The posters have been popping up like guerilla art across downtown Washington, D.C.

One of them, glued to the plywood walls of a construction site, depicts former Secretary of State Colin Powell's 2003 testimony to the U.N. Security Council in the run-up to the invasion of Iraq. "This is What Happens when there is No Second Opinion," the poster reads. "Iraq War: No WMDs. 141,802 civilian deaths."

Another poster next to it warns: "In case they shut us down on TV, Go to RT.com for the Second Opinion."

RT, Russia's international broadcasting arm funded by the Russian government, is not being shut down. Its 24/7 broadcasts are carried on cable systems in the nation's capital and across the U.S. and its website streams live video, along with news articles and blogs.

But RT is rapidly transforming itself into an American-style whistle-blower, relentlessly reporting on America's democratic deficiencies and malfeasance, at home and abroad.

"At home" means the United States, not Russia. Founded in 2005 as "Russia Today," the cable and satellite broadcaster soon dropped the "Russia" part -- convinced, its editor-in-chief Margarita Simonyan once told me, there was little interest abroad in life inside Russia. It re-branded itself, simply and anonymously, as RT.

RT anchors occasionally refer to the local time in Moscow or note, for some shows, that they are broadcasting "live from Moscow" but, for the most part, RT America presents itself as international news network with an American accent. Many of its anchors and reporters are young, attractive Americans, bantering with guests, and urging viewers to "Check us out on Facebook." CNN's former talk show host, Larry King, licenses two of his shows, Larry King Now and Politicking, to RT.

During the early days of the Ukraine conflict the network famously lost one American anchor, Liz Wahl, who quit on air, saying: "I cannot be a part of a network funded by the Russian government that whitewashes the actions of Putin."

In March, another American, Abby Martin, also criticized Russia's military intervention in Ukraine but she stayed on and is now one of RT's stars. Martin, an American journalist, activist and artist who studied at San Diego University, hosts a show called Breaking the Set.

It opens with a video clip of Martin, sporting sun glasses, dressed in heels and a short, form-fitting purple dress, seated aboard an RT helicopter flying over Manhattan.

As the program begins, she walks briskly across the RT television studio. "What's going on, guys?" she asks hiply. The topic today: Ebola. The scariest aspect of the epidemic, she tells her viewers, is not the disease itself but the "the sheer ignorance profoundly displayed by our educational system in response."

Martin's target, it's clear, is the "establishment" that rules the U.S., which RT relentlessly attacks on behalf of Americans subjected to the "establishment's" rules. As her show's website explains: "There are too many rules in our society that only prop up the establishment - an establishment that tries its hardest to divide and conquer the people. Breaking the Set is a show that cuts through the pre-written narrative that tries to tell you what to think, and what to care about."

One of RT's bêtes noires is fracking, the controversial method of extracting shale and other forms of gas and oil, which many environmentalists oppose. RT, too, it seems, is concerned about the environment. Its correspondents visit town hall meetings across small-town America and, cameras rolling, listen as citizens living near fracking sites complain about illness and disease caused, they say, by the technique.

Russian President Vladimir Putin, too, is worried about fracking's effect on the environment. But there's another reason for Mr. Putin's -- and RT's -- concern: fracking is boosting oil production in the U.S. World oil supplies are growing and prices are dropping, threatening Russia's economy, which is heavily dependent on oil exports.

America, Home of the Un-Free

RT also is positioning itself as the champion of American democracy, and chronicler of its demise. Citing the U.S. Constitution, for example, Thom Hartmann, host of RT's program, The Big Picture, recently decried a "corporate takeover of our government and the press." Not a word about the Kremlin's tight grip on Russia's domestic media.

RT foregoes the usual experts who appear on commercial U.S. networks, opting instead for obscure commentators with an axe to grind. Occasionally it interviews celebrities whose views about who runs America conform to RT's narrative. Actor Alec Baldwin, for example, recently lambasted the American government's response to Hurricane Sandy, telling the anchor "What's wrong in America is the government is no longer in control." Two-time presidential candidate Ron Paul told RT's anchor that U.S. actions in the Middle East are illegal and "totally immoral."

Taking a page from Fox News, an RT broadcast claimed America's "mainstream media's" reporting on the threat from the Islamic terrorist group ISIS is nothing but "switch(ing) brand for marketing purposes." Another RT broadcast charged that U.S. airstrikes against ISIS are, in reality, a means to divert attention from domestic (U.S.) issues.

The America that RT depicts has little to love. It's a violent place, where police shoot innocent civilians, where voting means nothing, a land where citizens languish under the merciless control of big corporations, with the government and the press prisoners of a "corporate takeover."

Of course, some American might actually agree with that analysis and RT's broadcasts hitch a ride on that viewpoint.

From the beginning, RT has specialized in conspiracy theories. The terrorist attacks of 9/11, it claimed, were likely the work of the U.S. federal government. This October RT broadcast a special report on the Malaysia Airlines passenger plane shot down over Ukraine, "MH-17: The Untold Story," claiming a mysterious second plane may have been the culprit.

Three years ago the network devoted major coverage to the "Occupy Wall Street" movement and the fixation continues with an October report on British comedian Russell Brand calling for a "revolution" within the US.

Fueled by a reported 40 percent increase in its budget, RT continues to grow. It broadcasts in English, Spanish and Arabic and has created a video and live stream service called RUPTLY. RT claims to have "global reach" of over 700 million people in more than 100 countries, a figure industry analysts call inflated.

But RT has the backing not only of the Russian government but of its President who believes that the media -- and RT -- are part of a fierce informational battle.

At the opening of RT's Spanish-language broadcasting in Argentina, Putin proclaimed "The right to information is one of the most important and inalienable human rights."

The "rapid progress of electronic media," he said however, "has made news reporting enormously important and turned it into a formidable weapon that enables public opinion manipulations."

Certain nations, he claimed, are attempting to "monopolize the truth and use it in their own interests" and under these conditions, "alternative information sources become especially needed."

RT is not trying to "monopolize the truth." It is, instead inundating viewers with a tidal wave of "alternative information." Creating a distorted, fun-house mirror view of America, it cries crocodile tears for the land of the free which, it hints, never actually existed and is, most certainly, gone forever.

It never even has to mention Russia. 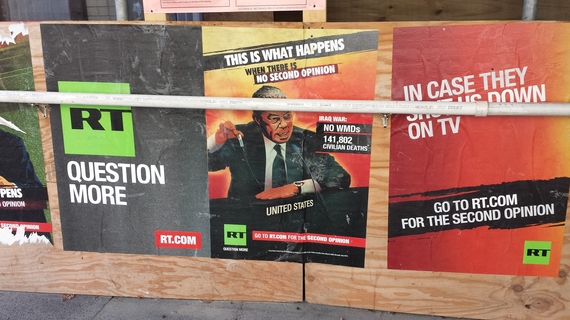