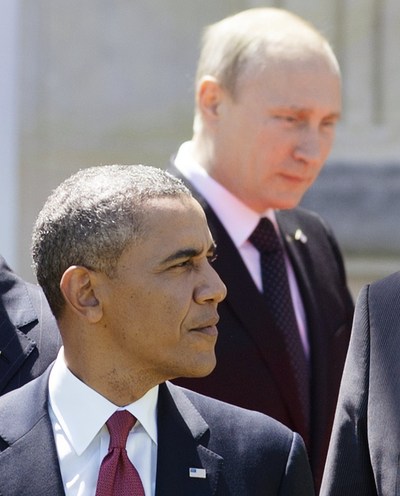 dis·so·nance [dis-uh-nuhns]
noun
1. inharmonious or harsh sound; discord; cacophony.
2. Music:
a. a simultaneous combination of tones conventionally accepted as being in a state of unrest and needing completion.
b. an unresolved, discordant chord or interval.
3. disagreement or incongruity.

How do you keep the music playing in a chaotic political climate where the only music being played is a dissonant duet with counter-melodies that never resolve, but instead contradict the common theme? Not only do the two contrasting tunes stem from two very different operas, what is more disturbing to the ear is that the primary players openly refuse to listen to one another.

Let's face the music -- an octave, more often than not, demands a resolution, unless the ear is attuned to atonal music. But does our world need more musical or political disharmony these days?

What is becoming increasingly obvious is that eventually, it always comes down to the basics: Who will get to sing the highest, the longest, and most importantly -- the loudest note -- and as a result, out-sing the other party? In a disturbingly dissonant world, there appears to be no place for harmony.

Even musical chaos (curious fact: today's political chaos is clearly mirrored in contemporary pop hits) requires the composer(s) to create pleasing music from chaos. But American-Russian relations on the modern-day political stage achieve no such aesthetic pleasure for the audience, or more precisely its civilians.

The two bands continue to play on, tooting their own horns, drumming to their own beats, while the two leading conductors on the ever-shrinking geopolitical scene refuse to collaborate. As cliché as it may sound, it does take two to tango.

The end result is a clashing dissonance that strikes the wrong chord over and over. Seamlessly repeated on an indefinite loop. And what's more staggering is that we, the people, will buy into it each and every time.

Perhaps our naiveté is what ultimately keeps the dissonant music playing...