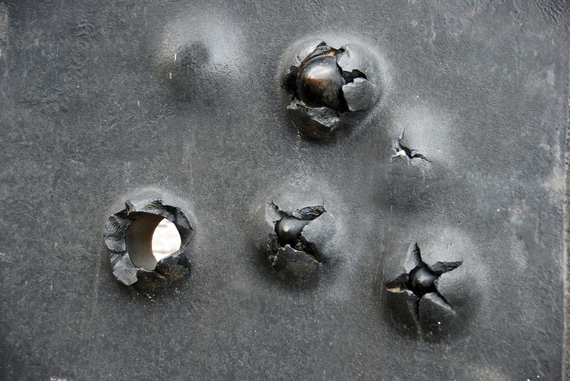 Armenians have had an ambivalent feeling toward Russia since independence in 1991.

On the one hand, they are grateful that Russia's defeat of Persia -- today's Iran -- in the early 1800s prevented the destruction of Armenian civilization.

They are also grateful that Russia has been the guarantor of Armenia's military security since the break-up of the Soviet Union 25 years ago.

That arrangement is actually part of official Armenian military doctrine.

But Armenians are also painfully aware that their nation continues to be one of the poorest in the former Soviet Union -- and many believe this reflects Russia's long subjugation of their country.

That's why many Armenians wanted Armenia to join the European Union rather than the Russian-led Eurasian Economic Union that Moscow bullied Yerevan into joining in 2013.

Armenians who had supported EU membership believed the country would have a better standard of living as part of the more prosperous West.

After all, a century of Russian-led Soviet rule and then Russian Federation economic dominance had failed to raise Armenian living standards.

That was why, in the fall of 2013, protests erupted when President Serzh Sargsyan made a 180-degree turn and scuttled Armenia's plans to enter into an EU association agreement -- a precursor to full EU membership. The announcement of the about-face came just hours after Sargsyan met with Russian President Vladimir Putin in what everyone knew was a Kremlin arm-twisting session.

Armenians also have become aware that Russia's motive for guaranteeing their military security is not altogether altruistic -- that is, a big brother protecting a smaller one just to be nice.

In fact, some of the Armenians who protested the decision to join the Eurasian Economic Union also called for an end to the Russian military presence in Armenia.

It's now apparent that Russia is developing Armenia as a staging base that could be used to strike neighboring countries opposed to Russian military adventures in the region.

The first evidence of that surfaced two decades ago -- and recent developments have only reinforced the notion.

Under a defense agreement between Russia and Armenia in the late 1990s, Russian troops -- not Armenian ones -- were assigned to patrol Armenia's borders with Turkey and Iran.

The message to Turkey and Iran was unmistakable: A border problem with Armenia would not lead just to a war with Armenia but also to one with Russia.

Additional evidence of the staging-base notion is that both Russian bases in Armenia -- one an army post and another an air base -- are near the Turkish border.

Further evidence is that in recent years Russia has sent a host of arms to Armenia's military, starting with an $800 million shipment in 2010. The weapons have included Iskander-M surface-to-surface missiles capable of landing deep inside other countries in the region.

And in just the past few months Russia has beefed up the military hardware at its bases in Armenia and agreed to sell an additional array of advanced weapons to the Armenian military.

The weapons Russia has added to its bases at Gyumri and Erebuni include MiG-29 fighters, Mi-24 helicopter gunships and Navodchik-2 and Takiun aerial drones.

In February of 2016 it announced it was selling $200 million worth of arms to Armenia.

The most recent round of Russian arms deployments to Armenia, and its agreement to send even more, go beyond possible threats to Armenia. They are also related to the Kremlin's military adventures in Syria.

Russia began a bombing campaign against opponents of the Bashar al-Assad regime in Syria in September of 2015.

In November of 2015, Turkey downed a Russian warplane that it had repeatedly warned to stay out of its airspace.

Moscow was furious, and promised consequences.

It has since added new weapons at its Syrian bases that could bring down Turkish warplanes, and continued its encroachments on Turkish airspace, basically daring Turkey to try to stop it.

Meanwhile, the Kremlin has made another move that will increase tensions in the region: It has announced it will sell advanced Sukhoi-30 fighter jets and S-300 air-defense missiles to Turkey's Middle East rival Iran.

Those involved in the Syrian conflict -- including Russia and the United States, which has been bombing ISIS forces -- recently forged a cease-fire that just went into effect.

Whether it will hold -- and the broader question of who will ultimately rule Syria -- remain to be answered.

One thing the conflict has shown is that Russia is intent on throwing its weight around even in countries outside its traditional sphere of influence.

And the resources it can draw on to do that include its staging bases in Armenia.