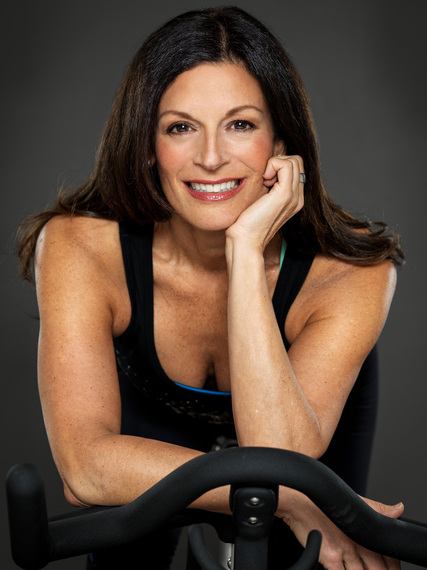 There is emotion in these Flywheel classes; people have said that they have actually cried during the class. Was it your goal to create this emotionally charged environment?
It definitely was one of my biggest goals because that's what attracted me to indoor cycling in the first place. I experimented with [indoor cycling] when I was going through my divorce, which was a pretty traumatic time in my life. Someone had taken me to try a class at the Reebok gym on the Upper West Side. I got in there and realized that this was not just an exercise class. There was something about the spinning of the wheels yet being on a stationary bike; you could close your eyes and you didn't have to worry that you were going to fall off or get hurt. There was also something about the empowerment that was happening both physically and mentally. It became this place that I went to, to feel stronger, to feel better, and to feel more confident. I became addicted to it. And then I just wanted to share [that experience] with everyone. We are all facing challenges every day of our lives, and that became the motivation for me to start this business.

Your motto is "Never Coast." How does this apply to you in both your personal and professional life?
"Never Coast" means never accepting mediocrity. It's a message I constantly tell my riders. It means never settling for less than your best. When it comes to Flywheel, I really feel like we have created a product that is the best in its field; the technology, the incredibly talented instructors, the sound systems, the attention paid to playlists, it all comes together and ends up bringing the rider the most engaging, effective experience possible.

You wanted to get into the business because you wanted to change peoples' lives. Is there someone that has really changed your life?
The people who have changed my life the most are my two children, my twin girls. Having children is a game changer in terms of understanding the meaning of selflessness, love and loyalty.

How do you juggle being both an innovator and a leader?
At work, my number one mission is to make sure everyone feels important and heard. The innovation happens organically because most of it is based on feedback. I think that's what makes Flywheel unique; we are not innovating for the sake of innovating, we are innovating because we are listening to feedback and trying to enhance the experience.

What would you consider to be your breakdown to breakthrough moment?
I spent the first quarter of my life as a dancer. All of my energy went towards dancing. It was my passion. And then, after graduating college at the age of twenty-two, I moved to New York City. I just assumed that I was going to be a performer, but it's not that easy. It's especially difficult if you insist, as I did, on staying in New York. The life became a little too grueling. I had to make money at some point. Ultimately I came to the decision that I would give up dancing, which was traumatic for me. I had invested so much time and energy into it and I didn't know what to do next. I had some jobs that I hated. I was an office manager and sitting at a desk all day was so foreign to me. I went through several years of struggle trying to find out who I was, what my new passion was, and what I was going to do with my life. But then I took a neighborhood dance aerobics class and the owner of the studio said to me, "You know, you should really teach here." I took to aerobics because it was similar to dancing in that I could work with music and choreography and I really enjoyed it. That was my first foray into group fitness. Slowly but surely, I was able to find another passion after dance, which I never thought I would. To be able to find another passion, and one that I could build a career from and support myself with, was a real breakthrough. Even though being on a stationary bike is the antithesis of moving across a floor in many ways, my career is still based on music. I have a musical background from being a dancer and every day I make new playlists for my class to keep them motivated. There is also a performance aspect when you're up there in front of 57 people. It's not that I want to be the center of attention, if anything it's the opposite; I want my riders to be the center of attention. But because I am up there, there is certainly a performance element.

Has there ever been a time where you saw something different and because you saw this difference it changed your life?
What comes to mind is developing a lot more confidence, confidence that I never had. There is no question that I got to this point through being knocked down. I had a lot of failures that I had to pick myself up from. And it's the old adage, but [failing and picking ourselves up] is how we grow, and how we get stronger. It took me a long time to get to a place where I felt like, "Wow, I've accomplished a lot and I have changed lives." Most importantly, I just feel better about myself when I leave my home everyday and go out into the world. That is just a world of difference.

What advice would you give to your younger self?
Be really careful with the people you choose to surround yourself with. There will always be people who will want to knock you down. Sometimes we can't avoid it, because we want to believe they are the right person, and then we learn that they are not. But just be really careful with the people you're going to put your trust into. Make sure that they have your back. When you find the right people, the possibilities are endless.

What do you want your legacy to be?
I want to be remembered for creating a form of exercising that doesn't feel like exercising. A method that allows people to feel empowered both physically and mentally, in a way that doesn't involve just sitting at a weight machine and pushing weights. At Flywheel, there is also a community that gets built naturally because a group of people are coming together with the goal of strengthening themselves individually, yet they are doing it with others. As a result, friendships are made, marriages happen, we have seen it all. It's just a wonderful way for people to connect, too, as opposed to this world of social media disconnect. All of this growth and expansion [of Flywheel] is really exciting because, to me, it's about spreading the message even further. It's thrilling, I still have to remind myself that this started with only one studio. And I just want to make sure that as we grow, we stay authentic. We remember that each studio is its own community, and that these individual communities are what make the business. We aren't a big, mass brand. I spend a lot of time traveling the country, visiting all the studios, teaching, and getting to know each of the instructors and the management teams. I'm exhausted, but I love what I do.

Ruth is the ultimate testament to resilience and stamina, not only physically but internally. Her drive and commitment to excellence not only lifts herself but everyone around her. Flywheel has become an institution where people go to release and realign themselves to become the best version of themselves. There are so many lives that have been changed by Ruth sticking to her unwavering self-belief. It's amazing how that happens.