THE UNCONDEMNED from Film@11 on Vimeo.

The task was almost unimaginable in its magnitude.

After the Rwandan genocide, in which an estimated 800,000 people were slaughtered over a hundred days in 1994, the U.N. created the International Criminal Tribunal for Rwanda with the goal of bringing the organizers of the bloodshed to justice.

The tribunal's inaugural case, led by two young U.S. prosecutors, would set a number of precedents -- but perhaps none more significant than classifying rape as a war crime.

Journalists Michele Mitchell and Nick Louvel have directed a new documentary, "The Uncondemned," that takes a powerful look back at the tribunal and the unique challenges faced by Pierre-Richard Prosper and Sara Darehshori, the lawyers who prosecuted the first genocide trial. They won their case in 1998 and made history as sexual violence was judged part of genocide for the first time.

"When people think about war crimes tribunals today, they have a vision because it's been going on for 20 years. But back then, the last time someone had attempted to do anything like that was Nuremberg," Prosper told HuffPost. "Failure literally was not an option -- too much depended on it. If we lost, what would that mean to the victims and the survivors? Their deaths were not being recognized or valued." 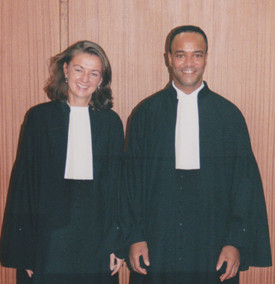 Darehshori, his co-counsel, was only two years out of law school when she got the assignment of a lifetime.

"It was all very crazy," she said. "We were sort of isolated. We didn't have the Internet. We didn't have email, still sending faxes; it wasn't that reliable. We kind of felt like we were on our own. There wasn't a huge body of law to look to. We were winging it."

Among the unsettled matters of law was the connection between rape and genocide, despite their long historical association.

According to a 1996 U.N. report on the Rwandan genocide, perpetrators of the killings used rape systematically as a weapon. "Rape was the rule and its absence the exception," the report noted, estimating that between 250,000 and 500,000 women and girls were raped during the course of the three-month genocide.

The rape crisis that accompanied the mass killings was so widespread that Prosper and Darehshori saw the need to argue that rape should be classified as a war crime and was itself a major component of the genocide.

"Before [the tribunal], rape and sexual violence was just seen as spoil of war," Prosper said. "For the first time in history, rape was put on equal footing with all other crimes committed during the time of war."

The New York Times reported at the time that the decision advanced the "world's legal treatment of rape and sexual violence," and provided the first international definition of rape as "a physical invasion of a sexual nature, committed on a person under circumstances which are coercive."

While participating in the documentary, Prosper and Darehshori returned to Rwanda, where they were reunited with the three Rwandan women who testified about their rapes. While the women were anonymous during the tribunal and had code names to protect their identities, they have come forward publicly for the first time in the documentary.

"It was interesting, over this much time, to get their perspective on the trial and to see they really appreciated playing a role in this," said Darehshori. "It was important to them to tell their story. They felt empowered by their experience at the tribunal."

Watch the trailer above and learn more about the movie, out early next year.