In this Easter week, I find myself reentering American society after spending two weeks in Rwanda. I have been there many times in the last 10 years, but never without work on the agenda. This journey was spent in reflection and visits with old friends as well as new. On April 7, Rwandans will commemorate 21 years since the Genocide against the Tutsis began, and lasted, for 100 days. History says that between 800,000 and 1 million Tutsis and moderate Hutus were slaughtered in what could arguably be called the worst holocaust in modern history.

As I read the paragraph I have just written, it feels cold and unfeeling to me. Perhaps that is because the only way to write is to steal emotions from images that flood the mind after revisiting the genocide memorials. Churches were the killing grounds that now dot the beautiful Rwandan countryside and incongruously preserve the shockingly grim reminders of those one hundred days.

And it is not over.

Bones and other remains are still being found during "umuganda," the day of mandatory community service that Rwandans perform on the last weekend of every month. I saw the results at the Ntarama and Nyamata churches which openly display the remains and clothing of victims. I also saw bones piled under blue tarps and stacked on shelves in a brick building behind Ntarama. At Nyamata, bones are placed on the church floor for possible identification; some found in old latrines and pit toilets, 21 years after the heinous events of 1994.

Does this sound unbelievable to you?

Consider the story of survivor Chantal Mudahogora. Her father's remains were found just over a year ago, still wearing the clothes her wore when he was murdered with his hands tied behind his back.

You can see her testimony from three years ago, before she found her father, and listen to her refer to the images that play on the "hidden screen" in her mind.

Even those of us who are not genocide survivors walk away from the memorials with images seared into our minds that can never be erased. And they should remain; prompting us to bear witness.

For those who do not know about these memorials, here is a brief explanation.

Nyamata is a Catholic church where 10,000 people gathered on April 10, 1994 thinking they would be safe from the Interahamwe. After all, churches are considered sacred ground.

They were all murdered.

Clothing and personal belongings remain, as well as skulls, bones and some of the machetes and weapons that killed them. A rosary that was presented to the congregation by Pope John Paul II is on the bloodstained and dusty altar cloth. An underground crypt that holds the bones of 41,000 victims of Nyamata and the surrounding area is accessible to visitors who can handle the claustrophobic environment. 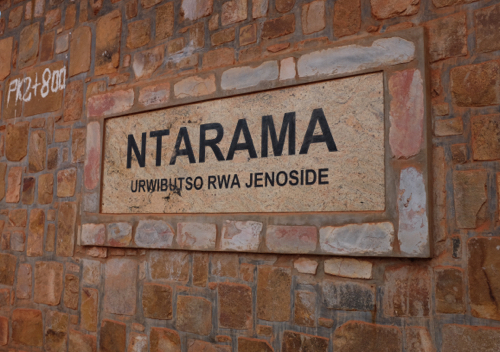 5,000 people died at Ntarama for the same reason as Nyamata. They sought sanctuary in a church. The clothing of the victims hangs from the rafters, but seems to have disintegrated since the last time I was there. Personal effects, including school notebooks and ID cards and diaries are decaying as time and climate take their toll. A large metal rack of shelves along the back wall of the church holds thousands of bones, sorted by kind: skulls on one, femurs on another, pelvises on yet another.

Words truly fail to describe what one witnesses at these two memorials. It is distressing that the government of Rwanda no longer allows personal photography. It leaves me wondering how we can continue to bear witness. I am not happy to look at bones and prefer to focus my camera lens on the mounds of clothing that are being quickly devoured by time because of the bodily fluids that have saturated the fabrics. But we cannot even takes photos of the clothing anymore.

I have photos from previous visits and confess to surreptitiously taking a few on this last visit, but I will not publish them. I will respect the wishes of the government and survivors. To do otherwise would feel like grave robbing.

I am not sure what the answer is, but my fear is that in this age of genocide denial that "proof" will no longer be available to people who cannot make the arduous journey to Rwanda. When you try to explain the concept of 10,000 people being murdered in a church compound, no one believes it. If you show a photo of bones stacked from floor to ceiling, it begins to hit home. 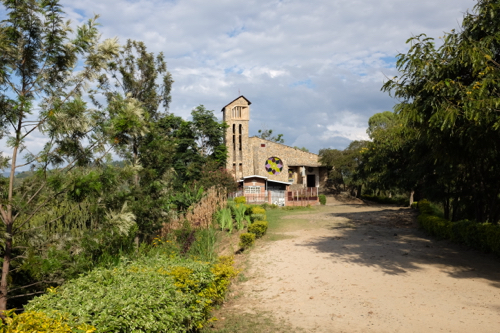 There might be an answer in the Church of St. Jean in Karongi (Kibuye).

11,400 people died here during the Tutsi genocide of 1994. A drunken mob threw grenades through the windows and took only three hours to kill everyone inside and on the grounds. But this is a place of hope, perched high on a hill above Lake Kivu. All remains have been entombed, and a kaleidoscope of light filtered through a simple stained glass window floods the church. 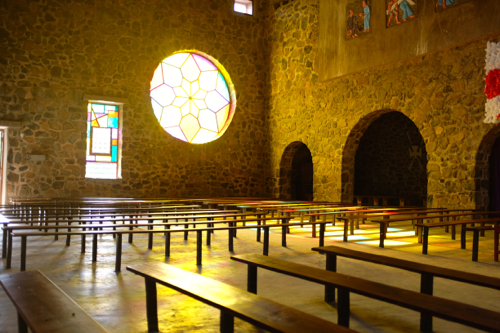 Looking more closely through a separate window to the left of the church vestibule, one can barely see three rolls of skulls. They are not close enough to shock, but jolt the mind into a sense of awareness of what happened. 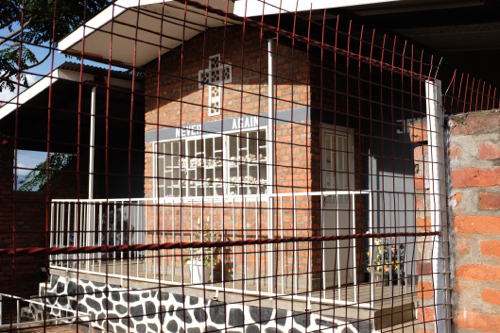 St. Jean's is open and unguarded to the public, unlike Nyamata and Ntarama. In this era of genocide denial by some, I was thinking it important that there be no restrictions on witnessing. I am beginning to rethink my attitude. Perhaps words can be more graphic than gruesome relics and photos. We writers just have to work harder at it.

The hope that is palpable at the Church of St. Jean can offer an alternative to rumination on death.

This is the week when Christians commemorate Calvary.


Dear fellow survivors of 1994 genocide against Tutsi of Rwanda; we are quickly approaching those dark days where we relive nightmares of our Calvary; this year is particularly difficult as the commemoration coincide with the Easter week end which could be a trigger for most of us as we are reminded of our last family gathering; I am praying so our Mighty God may give us the strength we need to overcome this difficult time. Life will never be the same but trust me we can learn how to cope; lets keep focused and stay strong for those who did not survive. We have the responsibility to keep strong so they can continue to live through us. Blessings to you all.

Those of us who did not live through the genocide against the Tutsis have a moral responsibility to bear witness.

Did I mention that it is still not over?

The same ideology that fueled the 1994 genocide is alive and well in Congo in the FDLR.

This week Radio Okapi reported that the FDLR broke down the door of the village chief of Luhanga, Joseph Kambale, killing him and three and three others. They shot several times, killing him and his two children. Kambale had fought hard against the murderous FDLR and had requested help on many occasions from the government of Congolese president Joseph Kabila. Help was not forthcoming.

Yes, it is still not over.