On April 6, 1994, a plane carrying Rwandan President Juvenal Habyarimana and his Burundian counterpart was shot down above the Kigali airport, crashing into the presidential gardens. Habyarimana's death sparked a deliberate campaign by extremist Hutus to exterminate Rwanda's Tutsi minority.

Differences between Hutus and Tutsis go a long way back, but were aggravated during Belgian colonial rule over Rwanda and exploited by Habyarimana to strengthen his position among fellow Hutus. In 1993, after months of fighting, Habyarimana signed a peace treaty with the Rwandan Patriot Front, the Tutsi rebel movement based in Uganda. But tensions remained, and Hutu extremists seized upon Habyarimana's death to start a massacre among their Tutsi compatriots.

The Hutu killing campaign lasted three months, until the RPF, under the leadership of now-President Paul Kagame, captured the capital in July 1994.

The Rwandan genocide became known as one of the most ruthless spates of violence in modern history. Twenty years later, these five statistics below show its brutality and serve as a strong reminder why we can never let a tragedy like Rwanda's happen ever again. 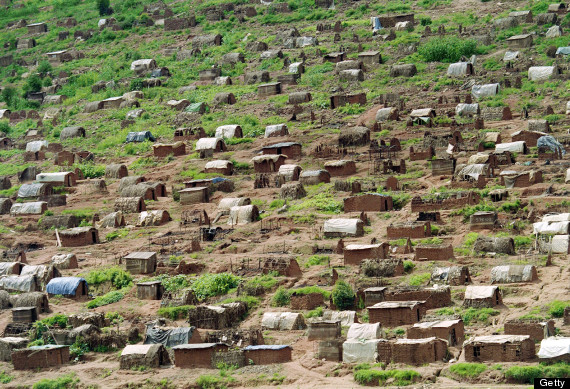 Refugees who left raging battles in Kigali live in a makeshift camp near the road leading to the Tanzanian border on May 12, 1994. (GERARD JULIEN/AFP/Getty Images)

The United Nations estimates about 800,000 Tutsis and moderate Hutus lost their lives in the genocide in just 100 days. Rwanda's RPF government puts the number at over a million. According to UNICEF, 300,000 of the victims were children.

2. If we follow the U.N.'s estimate, that means that nearly six men, women and children were murdered every minute of every hour of every day. 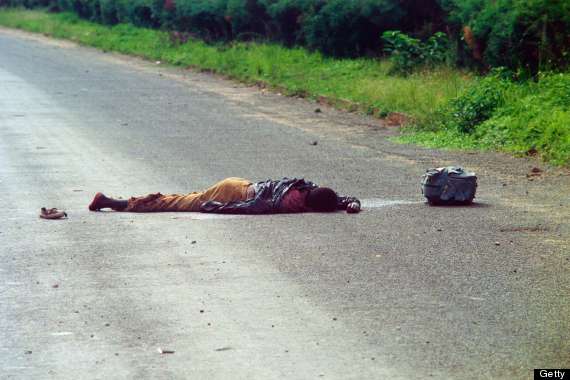 A victim of inter-ethnic clashes between Hutus and Tutsis in Rwanda lies on a road near Kigali on May 12, 1994. (GERARD JULIEN/AFP/Getty Images)

Rwanda's Armed Forces and the Interhamwe, a brutal Hutu militia, sought out Tutsis and anyone assisting them in roadblocks and house-to-house raids. Thousands of men, women and children were murdered on just the first day. 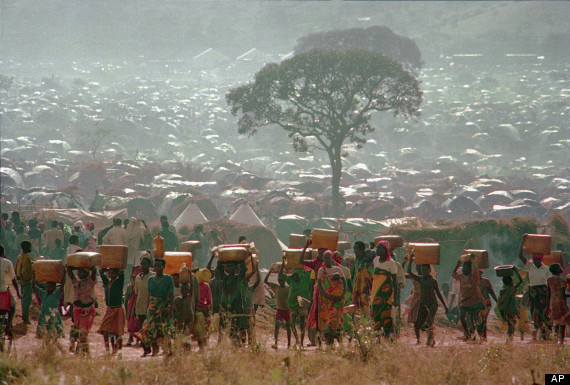 Refugees carrying water containers make their way back to their huts at the Benaco Refugee Camp in Tanzania, near the Rwandan border, East Africa, Tuesday, May 17, 1994. (AP Photo/Karsten Thielker)

Rwandan authorities consider anyone who was wanted during the killing spree but lived through it to be a survivor. According to the 2008 Rwanden census, there are 10 times more widows than widowers among survivors. At least 95,000 children were orphaned. 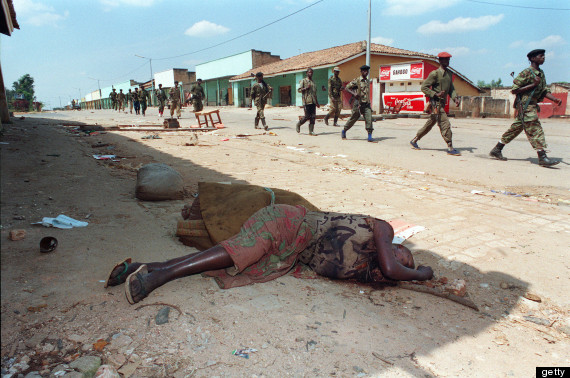 Rwandan Patriotic Front (RPF) soldiers walk on June 16, 1994, past the corpse of a woman killed by the pro-government militia before the city fell to the rebels on June 14. (ABDELHAK SENNA/AFP/Getty Images)

The U.N. estimates at least 250,000 Rwandan women were raped during the genocide, and a large number were subsequently executed.

Rape and sexual humiliation were used as a tool of war against Tutsi women, Hutu wives of Tutsi men and Hutu women who were suspected of aiding Tutsis. Tactics included rape, various forms of genital mutilation, hacking off of breasts, sexual slavery, forced abortion and forced marriage.

5. Ten percent of Rwanda's children struggle to survive without one or both parents. 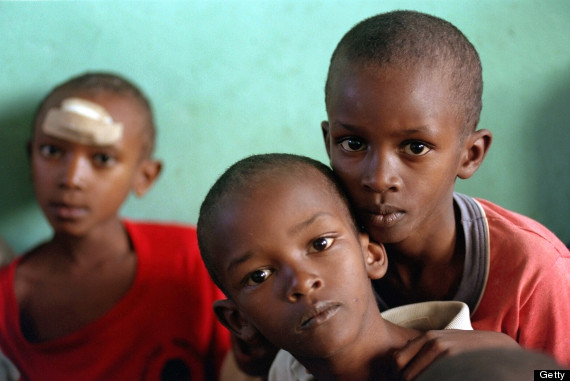 Rwandan orphans cling to each other on May 27, 1994 in the Kabgayi Church. (ALEXANDER JOE/AFP/Getty Images)

According to Human Rights Watch, as of nearly a decade after the conflict,400,000 Rwandan children were at risk after losing one or both parents in the genocide or in war, because of AIDS or because they are imprisoned on charges of genocide. They are often left in poverty, undereducated and at risk of harassment by law enforcement officials.