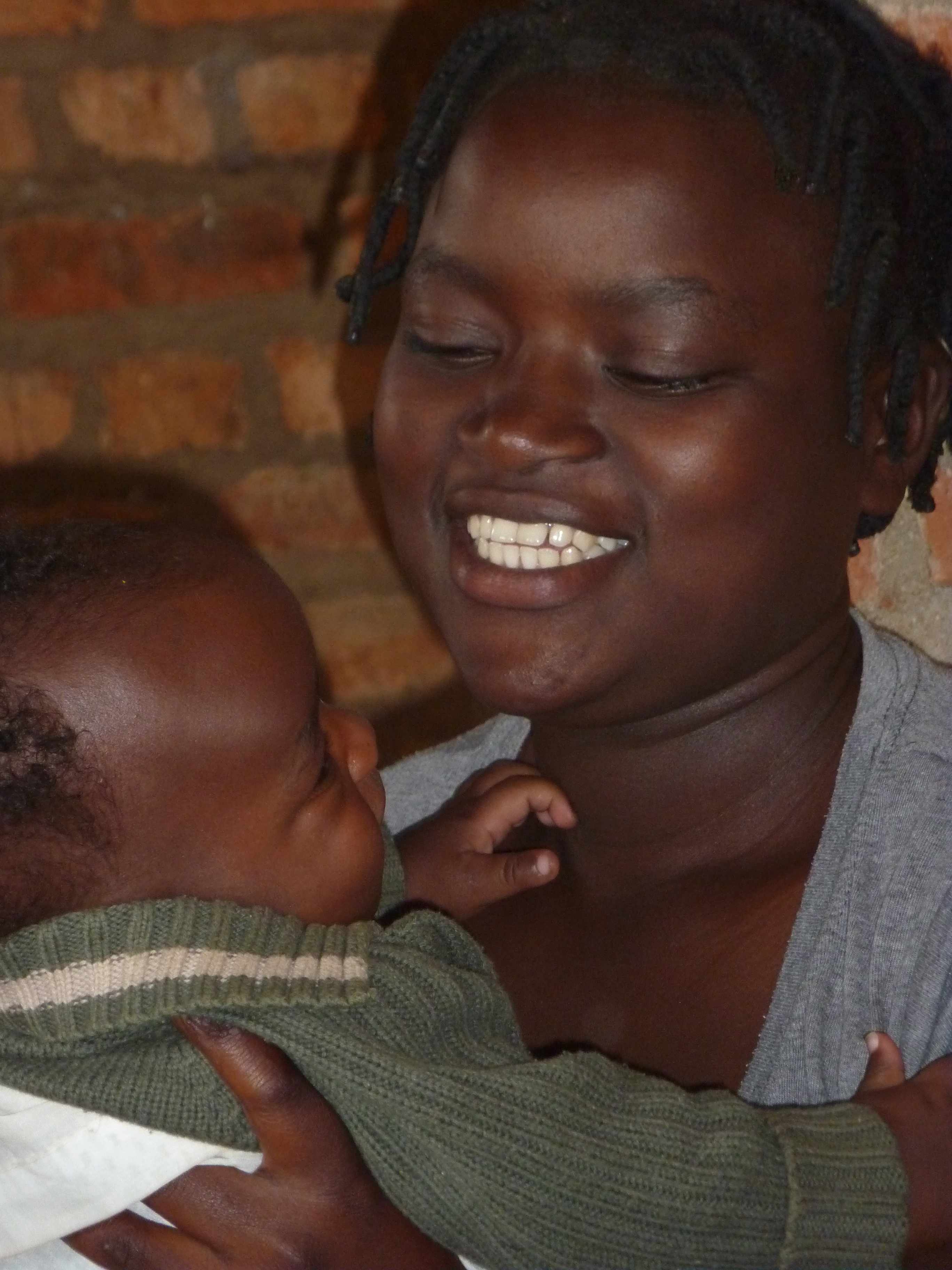 Julienne was just four during the 1994 genocide. She is HIV-positive and works as an artisan for this member-owned women's collective through The Ihangane Project. Ihangane brought solar lighting to the health clinic where she gave birth safely without transmitting the virus to her 4-month-old son, Kingi; they also provide nutrition supplements for Kingi and gardening and nutrition training for Julienne.

Ruli: Rwanda: Far up in the hills of central Africa in a village called Ruli, families live as do 90% of Rwandans, working the land. To get to Ruli, you have to go off the map, over 2.5 hours of bumpy roads, winding your way northwest of Kigali; and you have to be willing to leap backward in time. Here, people live mired in the past, swinging hoes and hoisting water, centuries behind in infrastructure, yet also suffering the aftereffects of a more recent past -- the 1994 Rwandan genocide.

Already challenged by poverty, this land-locked country with a legacy of colonizer-instilled tribal conflict experienced decades of violence that culminated in a gruesome genocide of nearly 1 million Tutsis and Hutus. Another 2 million fled to hellish refugee camps in neighboring countries. Houses burned, livestock died, fields languished, and the economy nosedived. It took years to discern whom to prosecute and forgive, who owned what, and how to live together again. Women were widowed, children orphaned, and an already-high prevalence of HIV skyrocketed among women survivors of rape. 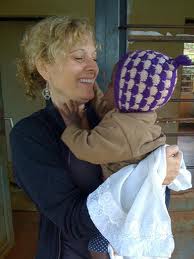 U.S. physician Dr. Wendy Leonard decided to take action. She boarded a flight in 2006 as the first physician volunteer for the Clinton Foundation's HIV clinical mentoring program in Rwanda. They sent her to a remote village called Ruli, and told her to oversee government health initiatives. She found, instead, that she had a lot of listening -- and learning -- to do.

"It's really about understanding who it is you're trying to help," Wendy says. "Every time I'm in Rwanda, I learn more about the people and the culture."

The first week on the job, Wendy's mentor, Dr. Jean de Dieu Ngirabega, told her, "If you want to help our community, you must first get to know us." He took her to a local wedding, a Catholic/traditional ceremony that carried on all day. Hundreds of guests sat patiently in searing heat on wobbly wooden benches, trading stories and gossip, watching a never-ending procession of neighbors bearing gifts in agaseke, hand-woven lidded baskets borne atop women's heads filled with rice, beans, seeds -- anything the new couple may need to start their life together. The father of the bride presented them with a cow. Wendy knew the hosts were among the poorest of Africa's poor, and all her theories about charity evaporated in the stifling air as she watched them feed every single person who showed up.

"Everyone gets a Fanta, and everyone gets fed -- even if only corn on the cob," she marvels. "No matter how poor you might be, everyone provides for each other." She saw this practice again at the clinical level. For example, surveys revealed that 200 community health volunteers wished for increased nutrition training -- not salaries. "It makes sense to try and raise funds to pay even a small stipend," Wendy reflects now, "but just by asking, we discovered that was not their motivation at all."

Then, the doctor from America flipped the model -- from top-down development to community-based grassroots--and launched The Ihangane Project in 2008. The name means being patient; its mission is to improve healthcare and economic development. Ihangane is "just facilitating what Rwandans are already doing," Wendy explains. "All our projects are initiated by Rwandans. We always ask, What can we do to strengthen their capacity?" 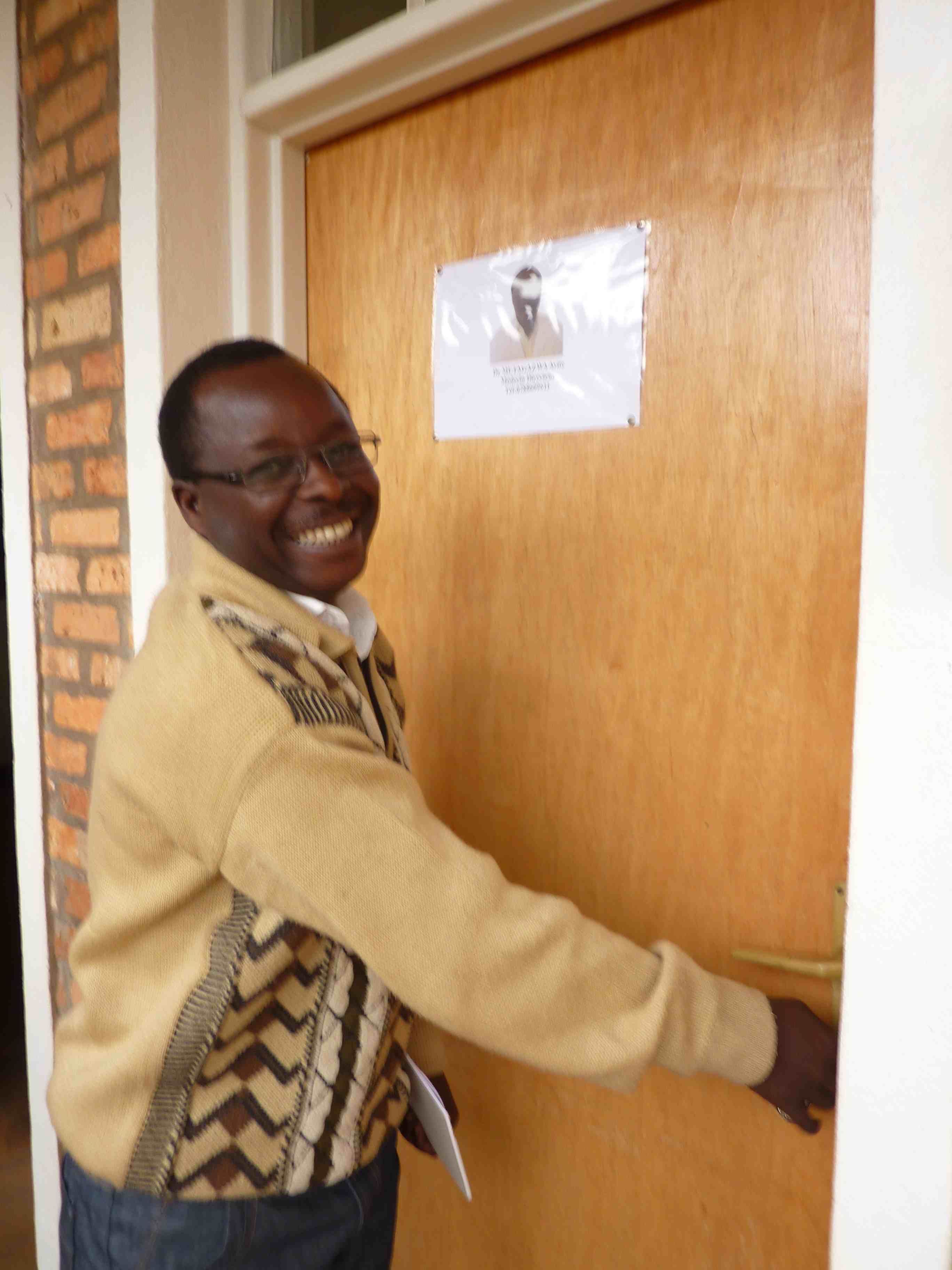 45-year-old Dr. Avite runs the 168-bed Ruli District Hospital, where he sees patients for accidents on motorbikes and in "unofficial local mines"; cardiovascular and cirrhosis problems. Throughout Rwanda, the population suffers a high rate of alcoholism and PTSD, anxiety, and depressive disorders: Part of the legacy of the genocide. Dr. Avite and his wife have three adopted teenage children.

Ihangane aims for self-sustaining solutions that soon will graduate from donor inputs. "For example," explains Wendy, "for HIV-exposed infants in Ruli at high risk for malnutrition, we provide sosoma, a porridge of soya, sorghum, and maize fortified with vitamins and minerals. This supports one of the many truly beautiful protocols from the government [Ministry of Health]; but the funding is not there. So, we are building farming collectives to grow component grains. We'll grow locally and sell to Ruli hospital at a much more affordable cost. The farmers also can sell their surplus crops for an additional profit."

The day we visit, rain falls softly at the top of one of Rwanda's "thousand hills," and the red soil looks rich. However, this land has been stripped by one-crop farming and poisoned by toxic pesticides. Many farming families have been reduced to a diet of rice and maize. Banana trees carpet the hills, yet only a few still produce fruit -- often used to make beer. Now, Ruli residents have asked for diversified garden inputs and training on how to grow high-yield crops and cook nutritious meals. 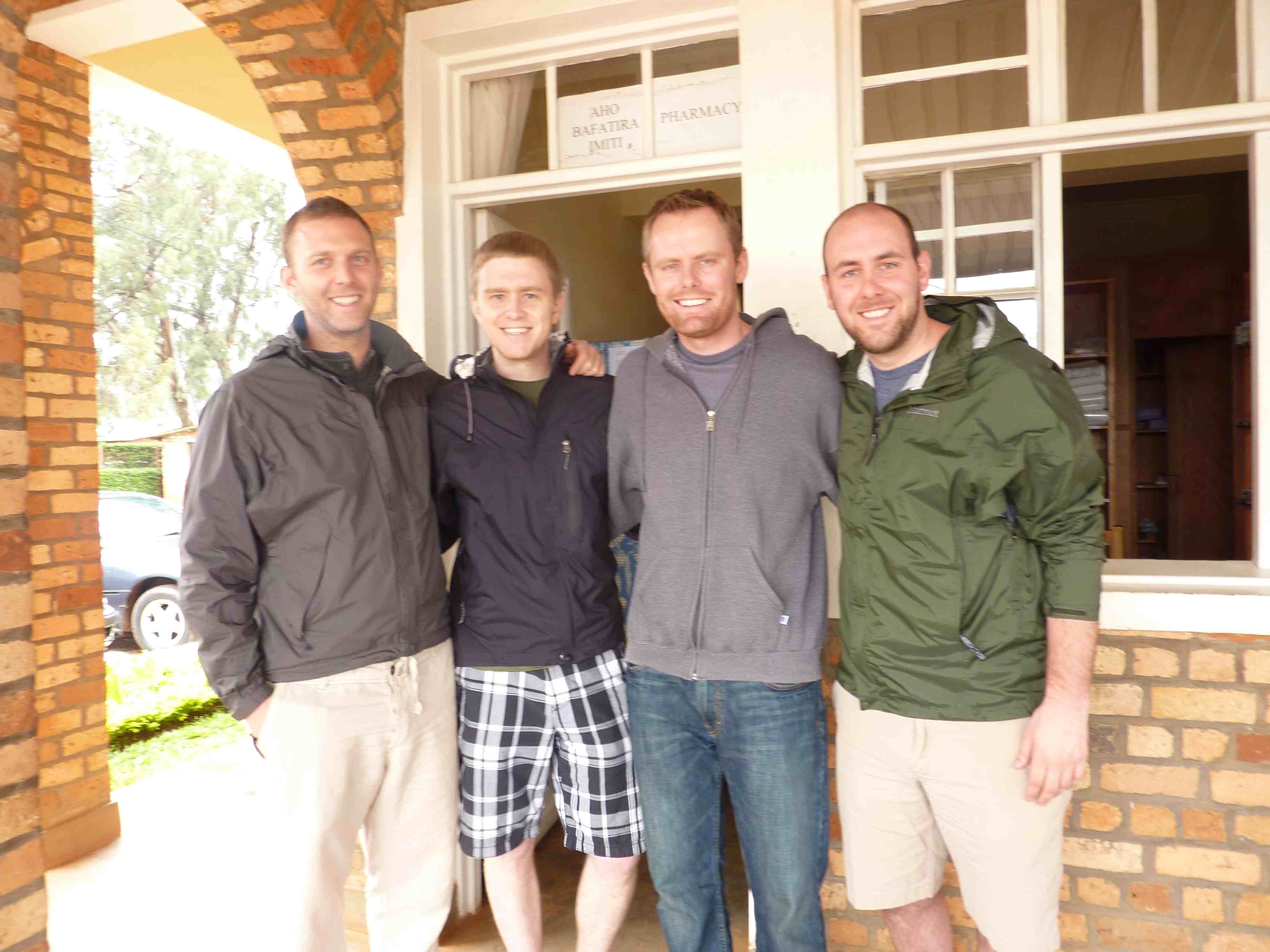 American MBA students learning on the job: four University of Michigan interns are spending four weeks in Ruli, testing an SMS-texting system of communications between district healthcare centers and the main hospital to improve patient care. They sleep in the local church. They've been amazed by the beauty of the land and the kindness of people here, and report a fondness for Rwandan cuisine and the local beer.

The main hospital has electricity; however, several of the eight outlying health centers previously had no power. Women who went into labor at night had to give birth in the dark. "Now we have solar lighting in eight health centers," Isaac, an Ihangane volunteer and lab technician, tells us. "We can light the maternity ward 24 hours a day, power a microscope and a radio phone used to call for an ambulance if needed." Partnering with Catapult Design, "the Ihangane solar project is just on time," Isaac smiles.

Gratien, another intern, bicycles from his father's nearby farm to help the Ruli Women's Cooperative launch a pig farming enterprise in nearby Nyange. Livestock farming will diversify their income and allow them to increase their membership. "Pigs are simple," Gratien laughs. "They are not complicated. They need only a small pen. They eat slop." Ihangane will raise funds for initial building and livestock materials, and then Ruli will take it from there. 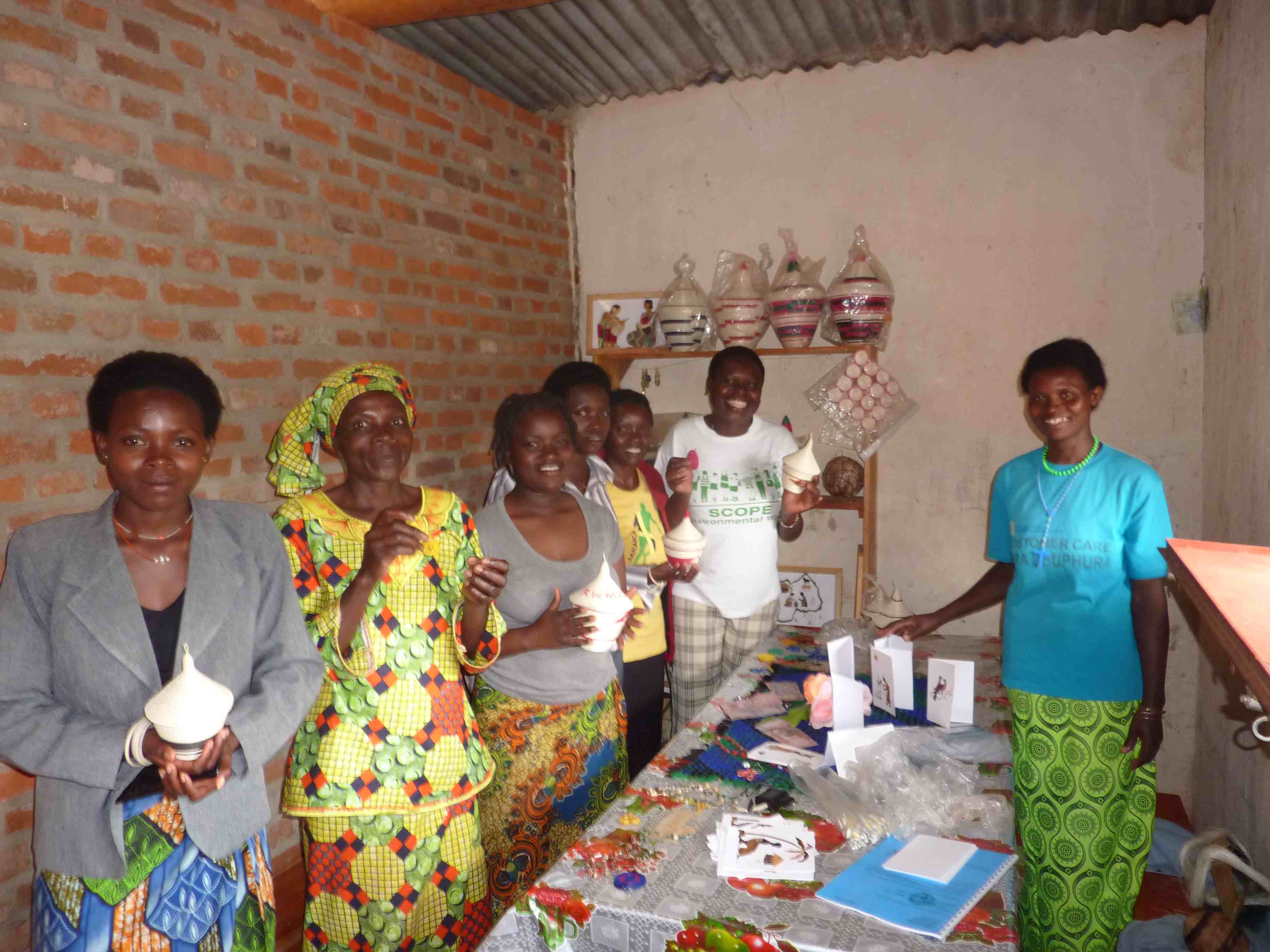 A few of the thirty artisans of the Ihangane Women's Association. Each member pays $25 to join. They put 10 percent of profits into savings, create group loans for one another, and divide the remaining 90 percent among members. Founding president Madeleine (far right) taught the members to dry sisal fibers, dye them, and weave into traditional wedding baskets. They also produce cards, pictures, and jewelry.

"Sometimes when we want so badly to help, we just come in and try to help," Wendy muses. "If we come in to learn who they are first, sometimes we find amazingly rich resources already in the community." For the artisans, Ihangane provided startup materials, and will provide follow-up training through local fair-trade expert from Rwanda Economic Development Initiative (REDI).

For the grandchildren of the genocide like baby Kingi, across Rwanda's 15,000 rural villages, the future looks brighter -- maybe. Currently, 12 million residents crowd into a country the size of Maryland; 43 percent are under age 15, and 46 percent of children under five suffer chronic malnourishment.

However, Rwanda promotes equality for women (more than half their members of Parliament); public education for all (now through 9th grade, soon to extend through 12th grade); economic development (GDP rose steadily 6 percent per year during the global economic recession) through enterprise (Rwanda aims to become the business/IT hub of Africa; currently it takes just six hours to set up a new business here). President Paul Kagame says, "Poverty contributed to the genocide. If that past is never to happen again, we must grow our economy." The way forward yokes education and enterprise--"enlightened self-interest"--as Head of Strategy and Policy Serge Kamuhindu puts it. "What we want is a second chance for everyone born in this country," he told us at the Hôtel des Mille Collines (Hotel Rwanda) last week. 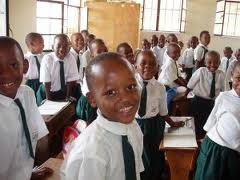 The future belongs to growing leaders across Rwanda.

A second chance -- and a healthy start -- is what Ihangane wants for Kingi, and all the youth who will build a prosperous, healthy future rooted in the best of Rwandan culture.