By J. Zach Hollo CAMBRIDGE, Massachusetts -- Marie Carine Boggis sat bolt upright in her seat as she drove and focused on the radio. It was early April 2014, and a special had just come on New Hampshire Public Radio about the twentieth anniversary of the Rwandan genocide.

"In the late 1990s, a new group of refugees started resettling in New Hampshire. Like the Bosnians and Cambodians before them, they were fleeing conflict and persecution in their home country," said the host. "Over the course of 100 days, more than 800,000, mostly ethnic Tutsis, were killed, with hundreds more fleeing and displaced."

By the end of the broadcast, Carine was fuming.

The piece went into great detail about the genocide and about how the country and its refugees were doing today. But there were some gaping holes, she thought: What have the last 20 years been like in Rwanda? What has it been like for survivors who moved abroad? And what is it like to live with that memory?"

Carine, 28, spends her free time volunteering at the Genocide Survivors Support Network (GSSN) to help Rwandan refugees in the United States -- those with stories similar to her own -- move on with life without losing sight of the past.

This was the aim of a workshop led by GSSN February 20-22 at Harvard Law School. The event, which Carine helped organize, gathered dozens of survivors to share their stories and provide support services. 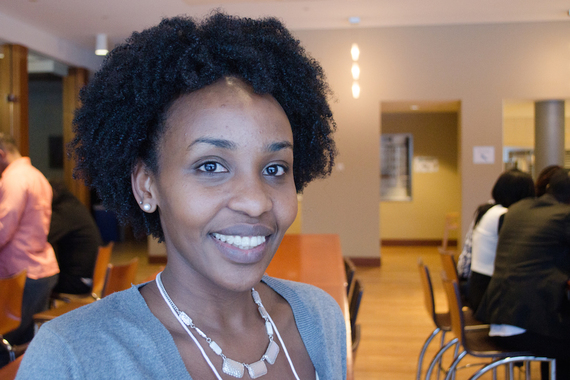 Carine and other organizers at GSSN believe that getting survivors comfortable airing their stories will help more people understand the dangers of racism and violence.

Carine was eight years old when the genocide began. Her family lived in Nyamata, a small city about 25 miles south of the capital Kigali. Carine said that shortly before the violence began, her parents sent her, an older sister, and an older brother to their grandmother's home about 12 miles north. Carine's parents stayed in Nyamata with her younger brother and two other sisters.

Her parents anticipated that there would only be conflict in the larger cities and planned to reunite the family later at their grandmother's home. But the violence spread quickly.

Carine's parents and siblings who had stayed behind were forced to flee. The church where they went into hiding was attacked, and Carine's family was killed.

Meanwhile, Carine and her surviving siblings were also in peril. Hutu militia members overran their grandmother's town and she was killed. The three children hid in a swamp along the Nyabarongo River.

They plunged into the cold, muddy abyss and ducked under a bush big enough to hide them. They were not alone. A sizeable group had taken to the swamp, and its bushes and roots became coveted shelter for Tutsis who needed to disappear. Her brother who was with her was found in hiding and killed. Carine and her sister survived.

"I don't know how long we stayed there. I just know that to me it seemed like an eternity," she said. "Eventually, [Tutsi] rebel forces took control of the area. And we were able to come out."

Carine was later adopted, and in 2000, her new family obtained visas to work in the US, where they saw an opportunity to begin anew while their country was in the midst of a painful rebuilding process.

Her first memories of the US include the biting cold, which she has since adjusted to, and her initial concern for the trees, which seemed dead in the middle of winter.

Later, Carine studied political science and international affairs at the University of New Hampshire, where she now works as an academic advisor.

In 2007, during ethnic violence in the Darfur region of Sudan, Carine decided to begin sharing her own story publicly, with the goal of encouraging people to stop a genocide similar to Rwanda's.

She said her motivation is tied to the arbitrary nature of her own existence.

"It's the simple fact that you're alive, and close to a million people who aren't. And you're not that special, so why are you the one that's here? And you feel like you're supposed to do something about it," Carine said.

On Saturday, February 21, Carine stood at the front of an open room in Harvard's Caspersen Student Center, gazing around at her audience, her wide brown eyes meeting those of her fellow survivors.

She stood tall and beautiful, black hair leading into an easy smile. She took measured steps and spoke with a calm intensity as she told her audience about her mixed emotions growing up as an adopted child.

"I didn't actually see my parents die, and I never saw their bodies, so sometimes I would think about the possibility of them showing up. In third and fourth grade, I would sit in class dreaming about that reunion, playing it out in my head," she said to her audience. "But after a few years I got really attached to my parents who adopted me, so that scenario began to worry me. In those later episodes, I would have to find a way to promise one set of parents that I would make sure to visit them on the weekends."

This ability to speak to a crowd and share details about life that people can identify with was a big theme of the workshop.

For some, it was the first time ever speaking openly about their experiences. Like Carine, many grew up as orphans and described their memories of the genocide as passive aggressive, sometimes weighing down hard on the conscience, sometimes not there at all.

Carine's husband Marcus, a New Hampshire native, remarked that Carine's painful memories are not a huge drag on her life. "Carine's a normal person. She goes about life like the rest of us," he said.

She goes out often with friends. She loves to travel and eat. She's obsessed with "Game of Thrones." And because she spends a lot of time driving, she makes sure to always have an audiobook to listen to.

As an activist, Carine says she plans to continue to speak out about ethnic violence and help her network of survivors succeed in their lives in the US. Eugenie Mukeshimana, GSSN's founder, said she hopes to create a Rwandan genocide center to memorialize the survivors and victims of the genocide.

Carine agreed. It's important to "get to a point where we have structures in place," she said, "where these stories are preserved."