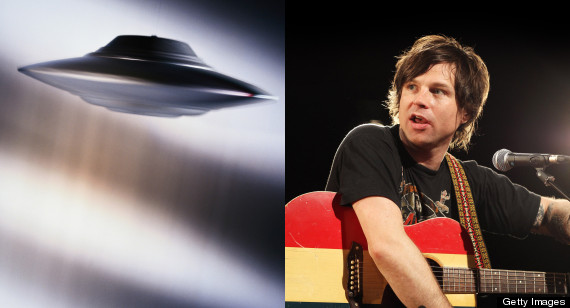 Ryan Adams isn't exactly sure what he saw in the sky around 11:00 p.m. on July 11, but he's sure the mysterious flying object was being chased by police and helicopters.

The 38-year-old rock singer and songwriter was driving in Glendale, Calif., when he claims to have seen a huge UFO in the sky, according to OpenMinds.tv.

"Whatever I saw was like a real sci fi film come to life," he wrote on his Twitter page. "Maybe they were testing the blimp out -- I dunno."

Adams -- who is married to 29-year-old singer-actress Mandy Moore -- sent out several tweets describing what he saw. He also tweeted that he hadn't snapped any pictures of the UFO "because I didn't twitter til I was parked. Enough people are dead from texting and driving."

Here are more portions of what Adams had to say in his tweets:

"Every person that sees something wack and unidentified aren't on drugs. Cars were slowing down to a stall to look at this thing. Wow."

"Three cops were tearing ass in its direction in oncoming traffic. Thing was huge. If it was a blimp then that was a f***ed up blimp."

"Choppers in the air near it. What is that thing?"

Oddly enough, shortly after Adams transmitted his tweets, all references to the UFO were deleted. So far, nobody else seems to have come forward with their own report or pictures or video of this alleged UFO sighting that evening.

And Adams hasn't issued any further statements about the incident.

There's one other thing worth mentioning. A couple of hours before Adams first tweeted his sighting, he apparently retweeted a previous UFO-related Huffington Post article by this writer.

Should we try to read anything into that?