Ryan and Trevor Oakes are identical twins who, together, explore the logic of art, the beauty of mathematics and the spaces where these two arenas of knowledge become inextricably intertwined. The Oakes brothers' artwork ranges from algorithmic watercolors to explosive pipe cleaner sculptures, each gorgeous experiment navigating a new relationship between sight, space and the mysteries of perception.

An exhibition showcasing the twins' multidisciplinary talents is now on view at the National Museum of Mathematics (MoMath) in New York. Titled "Compounding Visions: The Art of Ryan and Trevor Oakes," the show follows the journey of two individuals whose mutual curiosity sparked a lifetime of beautiful investigations. 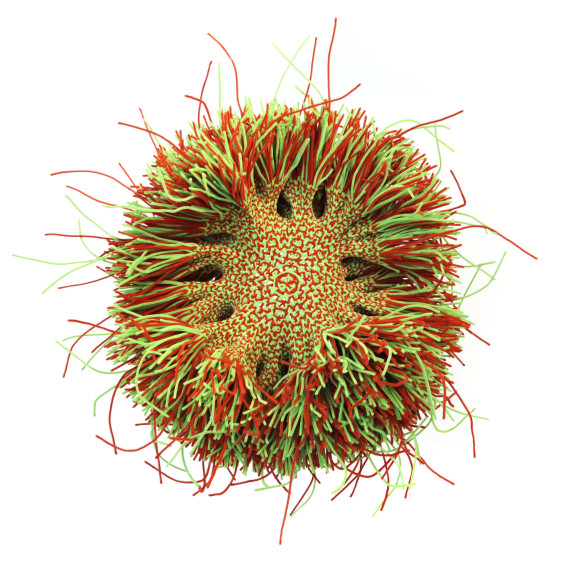 "When we were kids our parents were very supportive of everything that we wanted to do," Trevor Oakes explained to The Huffington Post. "They also tried to make sure we were exposed to a wide variety of things. It started on the art front. They would get us glitter and popsicle sticks and pipe cleaners and glue. Our favorite thing to do when we were little was make stuff. We'd go into these workshop desks we had and build spaces for our stuffed animals to play in."

This sense of imagination and free play is tangible in the artists' adult work. Just as kids make up rules to govern their mythological worlds, so the Oakes brothers craft arbitrary guidelines that lead to visual events that, contrary to the myth of artist as author, seem to have given birth to themselves, in a sense. The twins create the world that creates the art.

The two were enrolled in advanced math classes until college, when they both focused their formal education on artistic pursuits. But their artwork always, even if subconsciously, weaved mathematics into their complex artistic processes. "A lot of the art that we make is generated from devising a simple procedural recipe that is executed thousands of times in repetition," Trevor continued. "Mathematically speaking, it's called an algorithm. When you make muffins you're also following an algorithm. A lot of our art was built that way."

In other words, a simple rule governs most of the twins' work; a rule that, when repeated and multiplied, gives birth to a complex network that creates and self-propagates on its own terms. 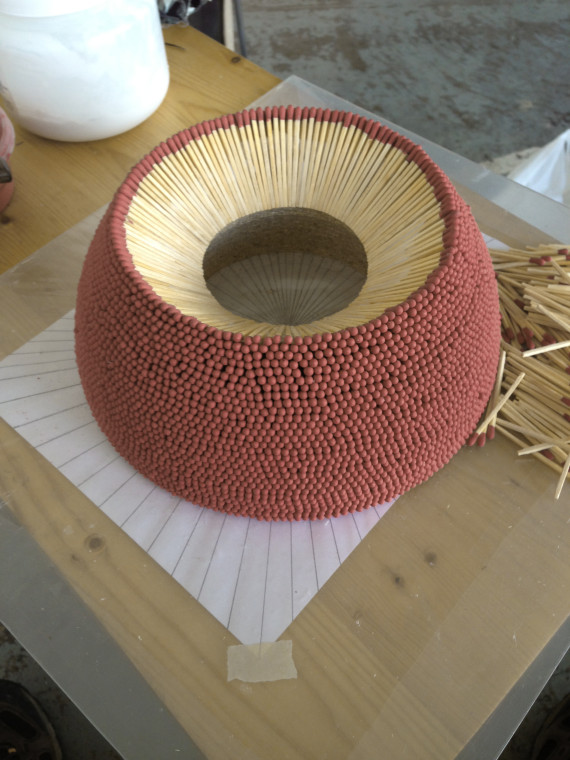 Take, for example, the twins' matchstick dome, a dizzying miniature hemisphere that organically arose from a single guideline: place every proceeding matchstick next to the head of the former. "Take one matchstick and place it next to another with the round heads on the same time," Trevor explained.

"As you place another matchstick, another matchstick, they create a row, and because the heads are all wider than the wooden sticks it will start to arc and form a circle. The radius of the circle is determined by the head of the stick; it's not really guided or dictated by anything except one match head on top of another. As you stack another layer the layers will be filled in like a colosseum, and if you stack enough layers it will make a dome or a hemisphere. The emergent form comes out of thousands of local interactions." From a pile of household activities a gorgeous sculpture emerges, all according to the natural laws of the matchsticks themselves.

The matchstick recipe is only one example of the twins' aesthetically inclined algorithms, each testing the limits of a single interaction multiplied to the extreme. One involving pipe cleaners dictates orange cleaners twist only with other orange, and greens only with greens. This formula results in an otherworldly organism resembling an alien hairball. However, the twins are most well known for their 3D drawing device, which splits one's vision in two at will, allowing the viewer to isolate foreground and background.

Modern Painters explained the phenomenon in a profile of the twins:

"Hold a pen in front of your face and look at this page beyond the pen -- the pen doubles; look at the pen, and these words double. Intrigued by this shadow image, the brothers practiced and eventually mastered the art of splitting their sight at will. They taught their eyes to resist acting in concert, such that without much effort (and entirely painlessly), one eye sees foreground and the other background."

Though the twins' work ranges greatly in medium and technique, one thing remains constant: their collaboration. "We tend to work together in the sense that we discuss everything together and our brainstorms collectively guide the ideas," said Trevor. "It's nice that he's my brother because we come to the best solutions if we are able to both be present. When it comes time to actually executing a piece, we'll let one of us fully build each individual work to keep the hand consistent."

As for their individual strengths and weaknesses: "Ryan tends to be a bit more broad perspective and I tend to focus in more on details. We're both pretty tolerant of tedium but I'm probably a little more tolerant."

See the twins' astounding mathematical artworks below. "Compounding Visions: The Art of Ryan and Trevor Oakes" runs until July 21, 2014 at the National Museum of Mathematics (MoMath).