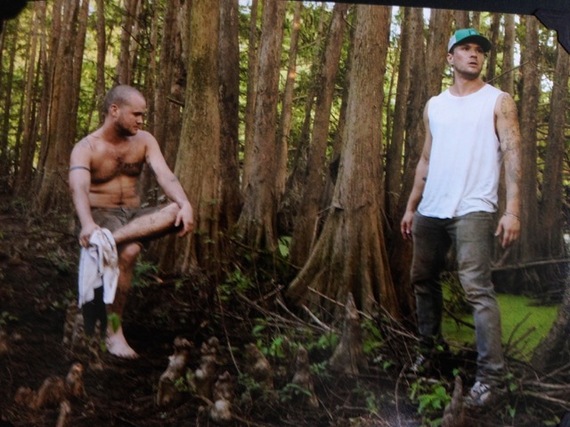 I interview Ryan Phillippe, director and star of the self-satirizing thriller Catch Hell, about Clint Eastwood, why you should never sleep with a cop's girlfriend, why comedians get away with murder, and why hedge fund people don't care that you're a movie star.

NS: Let's talk about Catch Hell. What made you decide to take the directing chair?

RP: I've always wanted to direct, since I was a little kid. It took a number of years and experiences before I felt I was ready to branch out that way. Working with Clint Eastwood on Flags of our Fathers was a turning point.

But the real inspiration for this film came when I was on location shooting in Shreveport, for this other movie. As an actor sometimes you only speak to people on the phone for the most part, and then you get to the hotel, and you blindly hop in a vehicle with someone. These guys took me to the woods on a horseback riding lesson. We drive an hour and fifteen minutes ahead of our hotel. And I just had one of these dark thoughts, like, "what if these guys aren't who they say they are?" And these thoughts reverberated. And I thought Misery, the Rob Reiner film, and films like it, Deliverance, and -- you know, nothing's truly original, but I started soaking up inspiration from those movies and my own experience. There is an element of this that could actually happen. It's to the point were I would tell friends of mine in the industry about this story, and they would share their own stories...

NS: I hate to ask, but do you feel like telling me any of those?

RP: (Laughs) well I don't think I should mention his name, but an actor friend of mine said he was on location, you know, and he messed around with this girl. It wasn't serious but, y'know, they were messing around, and it turned out that the girl's boyfriend was a local cop. So, for the last two weeks of his stay, anytime he looked out his window into the parking lot he would see a police cruiser sitting there with a policemen staring up at his hotel.

RP: Right? So there's a meta aspect of the movie which is my own personal experience of what this industry can be like -- and the part of the industry people don't talk about is the travel part. You get taken away from your home, from safety, y'know, and you just go to bizarre, remote places to shoot for months.

Also, part of this film is people have expectations of who you should be when you're an actor, and you're kind of picked apart by the press, and there's an element of that to it. But it's all in fun. End of the day I wanted to make a kick ass, ninety-minute thriller that felt like a short story, like a Stephen King short story. And I wanted people to read into it what they want to -- about the story, and about me. There are references to real films I've done in my career in the story -- the kidnappers talk about what would be Cruel Intentions, they call it Crimes Against Us. I thought it would be fun to not take myself so seriously. Of course, what I want to do is eventually far more complex and elaborate. This is just the beginning.

NS: Living in LA, I've seen this process of trying to get an indie film funded -- can you tell me a little about your experience? Honestly, from what I've seen and heard, it's like being in purgatory.

RP: It really is. You start by getting people interested in the script, you get people to say OK we can get behind this. And once you've finally done that, then sometimes the financing goes away. And by that point I had already started crewing up, and sending it to actors, so I had to scramble. I had already gone to Louisiana. (laughs)

This escapes the public a lot -- no matter if you're George Clooney or Robert Altman, both of whom I personally know have had trouble getting projects financed, they don't care -- you're asking people to give you their money for something you have total control over. When you're being financed by financial guys, there is only the bottom line, they don't care who you are or what you're trying to do. There is no, "oh, can we please?"

RP: The next film I'm directing, I won't be starring in. It's difficult if you're in the throes of the dramatic nature of the material, and you're trying to stay objective.

NS: As someone totally outside the world of film I've wondered about that -- when you're an actor and the director, how do you criticize yourself?

RP: I mean even right now, as we're talking, I'm criticizing myself. That's the kind of person I am. During shooting I really just started making the film just a vehicle to showcase Stephen Louis Grush and Ian Barfod. They're both incredible. And also it wasn't so hard to be in front and behind the camera, because I was kind of playing myself, so there's not a tremendous amount of character development -- (laughs) that's ironic.

As a director it was easier because I had these two theatre actors coming ready, no bullshit. When you're a theatre actor you do a performance, you don't have multiple takes. These guys nailed it each time. Something I learned from Eastwood -- Flags of Our Fathers was a 90 million dollar movie, of course, but 80 percent of the final product there was the first take. Which is amazing. It gave me the confidence to be like, ok, you can do it on a smaller budget. If you know what you want, if you've got the right people, you can move fast. Stephen and Ian made that possible.

NS: Let's talk about life outside of this film -- from hanging with you, I know a little bit about the difference between your persona publicly and who you actually are -- tell me about that gap.

RP: It's funny. After I went on Howard Stern for the first time, I got such a great response from that show. I'm a massive fan -- I always say Howard Stern, Jay Z, and Thom Yorke are the three voices I've heard most in my life, like, that's who I am. And after I was on that show, I got people coming up to me and saying, like, "I always thought you'd be an asshole," "Aw man I used to think you'd be an asshole." (laughs) and it's like, uh, thanks? I think when people have a certain look, or you take a certain role, people make assumptions. I was really remiss to join social media. But I'm such a big comedy nerd, so that motivated me to join Twitter -- all these people I think are hilarious are on there. Getting to see Louis CK and Dave Chappelle throw stuff out... it's amazing. And I like throwing out weird shit.

NS: I've noticed you often change your Twitter name to a pun on your name, like, every two weeks. I think it's "Phils Good" right now.

RP: I mean I enjoy being silly. But another thing I've noticed is a difference between actors and other kinds of entertainers. The thing that's funny is that comedians... and rock stars, and hip-hop artists... they can say the most outlandish shit and it just flies by. I say something odd or crazy -- and it gets reprinted, and blogged, and "how dare you" and all of that.

The idea is that Tracy Morgan goes on Howard Stern and says literally the craziest thing you've ever heard, and I'll go on and say something slightly off color and I get totally strung up. (laughs). And then you get to a point where you don't give it much credence. When I was young I used to Google myself, and I don't do that stuff anymore. When you obsess about that kind of stuff, it's negativity and you're, y'know, you're eating it.

One good thing about getting older, you don't feel like you need to please people in the same ways anymore. I wanna try everything. I might act a little more, but I also did this human rights documentary that got some awards, and that's something I'm really proud of. I want to direct, I want to do this web start-up that I'm so close to being able to talk about. I want to do everything, despite people wanting to put me in a box. I want to try everything.

You can get Catch Hell on Itunes here.