The conventioneer was in his 60s, wearing a ball cap, glasses and trim little white beard. Like me, he was at the Marriott City Center in Minneapolis last week to attend the yearly gathering of SABR, the Society for American Baseball Research. Barry Bengtsson of St. Paul was also a founding member of Save the Met, a group dedicated to stopping the first Twins ball park (Metropolitan Stadium) from becoming the Mall of America (they never did) in the early 80s.

Mr. Bengtsson was also a benevolent angel. About to take in my second of three Twins games at gorgeous and convenient Target Field, I was all prepared to make the 10-minute walk up 7th Street and buy a scalp ticket outside. Barry apparently heard my ball park chatter in the hotel elevator and offered me his wife's season ticket for free because it was "too hot for her."

It was in the mid-80s and fairly humid, but even though my sun lotion-less arms got burned, I felt nothing, for Mrs. Bengtsson's seat was 10 rows behind the Twins dugout with an absolutely perfect view of the field. This was only my second SABR convention, and magic was clearly happening. 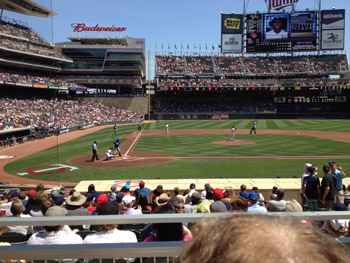 There were 34 half-hour research presentations spread over the convention's three full days, many of them fascinating. There was an author's panel at a nearby Barnes & Noble, a player's panel of ex-big leaguers, a bus tour of local ball park sites, a screening of Knuckleball!, a new, superb documentary on the infamous pitch that focused largely on Tim Wakefield and R. A. Dickey, a vendor room with small press titles to be reckoned with (The Battling Bucs of 1925, Castro's Curveball, Jews and Baseball: Volume 2, Occasional Glory, a history of the Phillies, Long Taters, a biography of George "Boomer" Scott), numerous research committee meetings, and a Friday night Twins-Royals game which, as I said, I chose to embellish with Saturday's day-night doubleheader.

Oh, and did I mention the fun time eating, drinking, connecting and re-connecting with baseball scribes of all makes and models I'd met on the Internet? There, I just did.

SABR is an all-purpose baseball lovers' gathering that regularly draws from two different camps -- the historical fact-obsessed and the modern stat-obsessed -- and runs everything through a fascinating blender. Much care is taken to schedule two presentations at a time in adjoining rooms that appeal to each camp. For instance, the opening talks matched Todd Peterson on the black Minneapolis Keystones 1907-1911 against Herb Krabbenhoft study of Lou Gehrig's "corrected" lifetime RBI total. If the presentation you picked didn't exactly fulfill your hopes, it was always easy to "jump ship" and try the other one.

I had no problems enjoying most of what I chose. Robert Fitts' "Murderers, Spies, and Ballplayers: The Untold Story of the 1934 All American tour of Asia" won the conference's presentation award, and with good reason, telling a fascinating account of the Bambino's all-star tour with the use of slides and actual footage. Anthony Giacalone and Steve Treder, who wowed me last year with their thrilling talk on the Giants-Dodgers '65 pennant race, split up this time around, Giacalone with a funny discussion of the 1968 expansion shift, and Treder with a solid half-hour on the "deeds" of utility infielder Ducky Schofield. My personal favorites were "How Warren Spahn Almost Ruined SABR", Bob Buege and Paul Haas on a little-known lawsuit by Spahn against hack biographer Milton Shapiro, and Robert Garratt's "The Scandal of Candlestick," concerning the shady land dealings around the building of the worst ball park ever.

Friday's two-hour luncheon featured a wonderful keynote address called "Nerd is the Word" by author John Thorn, longtime SABR member and MLB's official historian. Using humor, wit, and his unmatched knowledge of ancient baseball history, Thorn expertly summed up the "differences" between new and old members, chronicling how everyone is really cut from the same nerd cloth. Or as he put it,

The stereotype of the nerd is one who is more comfortable with computers (or, back in the early days of SABR, index cards and shoeboxes!) than with human beings. The nerd has a keen scent for phoniness and opposes the dominant culture. The nerd regards information as the most valuable of all currencies, as it permits him or her to show up the fatheads who run major software companies, news organizations, and the like. Globally, techno-nerds are united in their hunt for covert data. No bit of information is too trivial for consideration, as long as it was not previously known. This, by the way, describes SABR at its most mockable level.

The 2013 SABR convention will be in Philadelphia, and 2014 is slated for Houston, and I can guarantee similar sights, sounds, lectures and laughs will be at both of them. So might Barry Mednick of Yorba Linda, R. J. Lesch of Adel, IA, and Ty Waterman of Attleboro, MA. Planted at a table in the SABR registration area early in the morning, Mednick's all-time White Sox team was battling Lesch's all-time A's team in Game 1 of the GAFL American League championship, using a souped-up version of the Statis Pro Baseball board game. It takes GAFL members four years to play a season, and it was obviously a huge moment, because Waterman sat directly across from them, hands cupped over his mouth, doing the loud play-by-play for every batter.

"That's the last time you're going to be asked about the fielding prowess of Luke Appling in the course of this season! Give us a little background..."

Ah, SABR. For a total baseball immersion, you just can't beat it.

Jeff Polman writes fictionalized baseball replay blogs, his current endeavor being Mystery Ball '58. His first such blog, "1924 and You Are There!" has been published by Grassy Gutter Press and is available on Amazon.

Writer of many things cultural and fictional