The head of the Israeli Defense Forces' New Media Desk has come under criticism for a scandalous picture on his Facebook page. The photo in question shows Sacha Dratwa wearing what appears to be blackface, alongside a caption that reads "Obama Style."

Although the photo was taken in September, Dratwa's Facebook profile only recently came to prominence following the role of social media in the latest conflict between Israel and Hamas -- a role that earned Dratwa a high-profile article on Gawker and coverage in other news outlets.

According to ABC, the IDF spokesman seems to be wearing mud from the Dead Sea in the photo -- an activity many engage in while visiting the site. Reactions to the photo, however, have been all but commonplace.

Dratwa manages the IDF's social media feeds, including its Twitter account, where he sought to rebut such allegations:

@viewstatus I'm not racist, please stop to spread lies about me: https://t.co/0NJ3ZD4X

The lieutenant went one step further Sunday, releasing this statement on Facebook:

There have been attempts to make use of private photos from my Facebook profile in order to publicly misrepresent my opinions. Due to the amount of public attention I've garnered in recent days I have decided to restrict access to my page, in order to protect my privacy and prevent further cynical use of the information therein.

See the full screengrab, below [via Al Akhbar]: 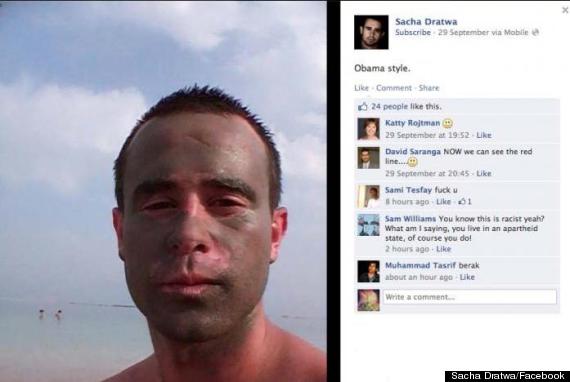