In early September, a huge delegation of the Buddhist teacher and author Zen Master Thich Nhat Hanh's monks and nuns will arrive in New York City to lead retreats, book launches, and outdoor meditations and I will be driving from Baltimore to join them. In more than 20 years of working in Baltimore as a doctor, researcher, author, community organizer, and activist, I've come to understand that the space for deep-rooted change opens up only when we can embrace the spiritual and the political, come to see our "enemies" as our brothers and sisters acting unskillfully, and view our fragmented communities in their whole, true, and often painful interrelatedness.

I didn't always think this way. I spent many years as one of the angriest of activists, fueled by the mounting injustices perpetrated against members of poor black and brown communities -- including myself. I have been thrown face down on the ground by police officers and searched simply for being a black woman driving a car. As a rare Afro-Latina face studying public health at Baltimore's Johns Hopkins University, I became more interested in the university's immediate neighbors -- an impoverished and segregated black community suffering from poor diet, lack of essential services, deteriorating housing, and police violence -- than in my classroom studies of anatomy, health policy, and epidemiology. When in 2001 the university set in motion a redevelopment plan that displaced more than 700 black families, hiring more security officers to protect itself against the community as it did so, my path of public health and social justice left the classroom and took root on the ground in East Baltimore. Along this path I developed my fair share of fear and anger, using it, as so many activists do, as a tool to organize, demonstrate, and call for change. 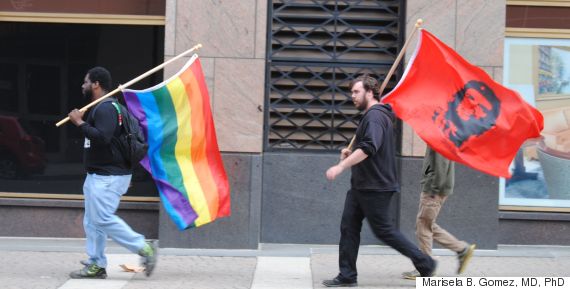 On April 20, 2015, I was there as my community rose in anger and sadness when yet another young black man lost his life while in police custody. His spinal cord severed, Freddie Gray did not stand a chance in the face of the structural racism facing black communities across the country. As our pain surfaced in marches, blogs, and community meetings, the mainstream media appeared shocked to report that Baltimore was burning. But Baltimore has always been burning. Decades of neglect, racism, and displacement have contributed to 85 percent of children qualifying for free lunches; 14.5 percent of adults in majority black neighborhoods on parole or probation; and a 37 percent unemployment rate among young black men compared to 10 percent for white men of the same age group in 2013. It's a slow burn, but it's a burn nonetheless.

Sadly, today's United States is not that different from the one that Thich Nhat Hanh encountered when he arrived in the 1960s to call for an end to the "American War" in his home country of Vietnam. We were in the midst of a brutal civil rights struggle, with injustices perpetrated on black communities echoing those we have seen recently in Charleston, New York, Ferguson, Cincinnati and Baltimore. He met with Dr. Martin Luther King, Jr. and developed a bond so deep that Dr. King went on to speak out against the war in Vietnam and to nominate Thich Nhat Hanh for the 1967 Nobel Peace Prize in an open letter to the Nobel Committee, which, in that fractious and tumultuous year, declined to award the prize to anyone at all.

Thich Nhat Hanh and Dr. King recognized that the path to lasting change lay in the hands of a "beloved community" of activists cultivating love, peaceful means, and understanding even in the midst of violence, oppression, and injustice. "In a world depending on force, coercive tyranny, and bloody violence, you are challenged to follow the way of love. You will then discover that unarmed love is the most powerful force in all the world," said Dr. King. "Peace in oneself, peace in the world," says Thich Nhat Hanh.

Thich Nhat Hanh and his community teach mindfulness in daily life -- a practice he developed as a secular expression of his radical brand of socially engaged Buddhism, which brought monks and nuns out of the monasteries during the Vietnam war -- alongside the tens of thousands of community organizers they trained -- to support devastated communities suffering from the relentless, brutal bombings. His first mindfulness practice book, The Miracle of Mindfulness, celebrates its 40th anniversary this year and was written to offer practical support to his monastic and lay community in Vietnam, before becoming a bestseller with Western audiences. Thich Nhat Hanh's writings continue to speak eloquently to the activists and community organizers of today, teaching us that it is impossible to help others if we do not also help and heal ourselves, and that peace is the only way to justice. As Dr. King said, "While abhorring segregation, we shall love the segregationist." 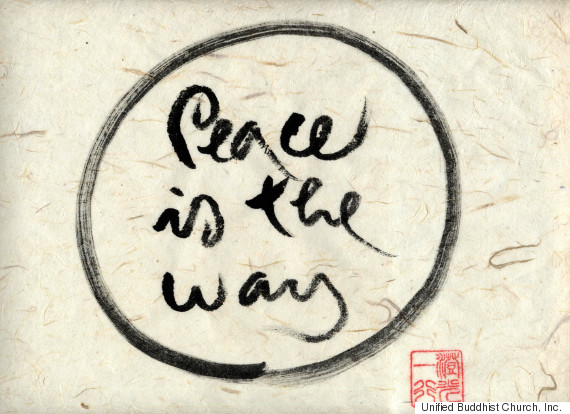 The first time I truly understood this was in a meeting with a white developer planning to displace an entire black community in order to build condominiums for white "creatives." As the head of the organization fighting this gentrification project I had confronted him many times, often with anger. But that morning, when I looked at him, I saw a father and a husband earning a living to keep his family educated, healthy and safe -- not my enemy. I saw his needs as the same as those of the families I was fighting for. I realized that he was playing his part in a bigger system that had unfairly accumulated wealth through decades of structural racism and classism and that these systems would only change when the individuals inside them changed -- and that included me.

When my fellow activists told me I was no longer angry enough, I agreed, and left my job to spend one year with Thich Nhat Hanh's Plum Village community in France to explore how this new insight could heal my accumulated pain and cultivate peaceful means in my justice work. This time allowed me deeper understanding of how individually, we can change systems of oppression. It is not that we do not confront those causing harm to ourselves and our communities. It is that the impetus for our confrontation must come from a place of understanding and compassion. In order to remember this sweet and sacred place we must come back to the present moment in front of us. So when I begin to feel anger, I do not speak. I breathe. This allows a space for me to see the reasons I am becoming angry and to question the perceptions I have. This spaciousness also helps me understand the perceptions that others may be acting from, giving me more understanding of the situation, and allows for a different engagement, one motivated from a place of freedom and peace, not anger. In a critical moment of engagement, this space allows clarity for decision-making rooted in a deeper principle of non-harm.

During a recent interaction with a police officer after the uprisings in Baltimore I found myself considering how tired he must be feeling. I felt no animosity, just a desire to understand how we had gotten to this stage of brutality, on both sides. I asked whether we could have a conversation off the record, with no names or badge numbers, about the truth of policing. He responded: "Oh, you want the truth truth." I nodded yes. In that moment, we bridged a divide and shared a common understanding. 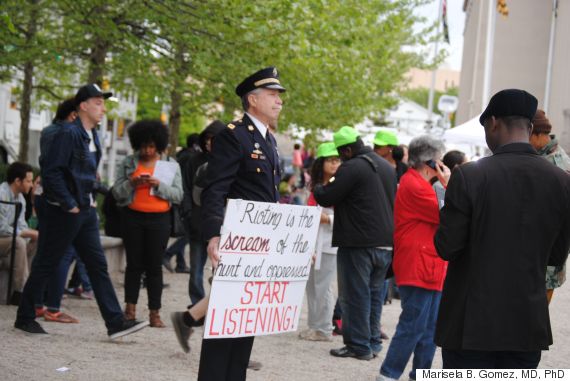 As I walked in resignation to a demonstration just days after Freddie Grey's funeral, I noticed a flower peeping up from the sidewalk and I smiled. It was a beautiful yellow flower, oblivious to the emotion and turmoil around it, reminding me that I was part of something larger, an astonishing planet which I have the privilege to share with plants, animals, minerals and my beautiful, flawed fellow human beings. I thanked it for being there and continued on my way, nourished by its simple beauty and calm resilience. Eight years ago I might have stepped on it unknowingly. I certainly would not have seen it. This ability to see beauty and hope in the midst of the suffering of social injustices is the capacity for peace I want to nourish in myself and others. I see this kind of sacred activism reflected in the faces of activists in photographs of the 1960s civil rights struggle; this sacred activism was also there in the face of Thich Nhat Hanh during the most despairing and violent days of the Vietnam War.

Sacred activism is available to all of us today and is as simple as taking a first breath in mindfulness, listening deeply to those around us, or fully seeing whatever is present before us. Mindfulness helps us heal from our personal fragmentation so that we can approach our community fragmentation with an open and courageous heart, effecting social change from a place of love and understanding of ourselves, of the communities we serve, and of those we are used to calling enemies.