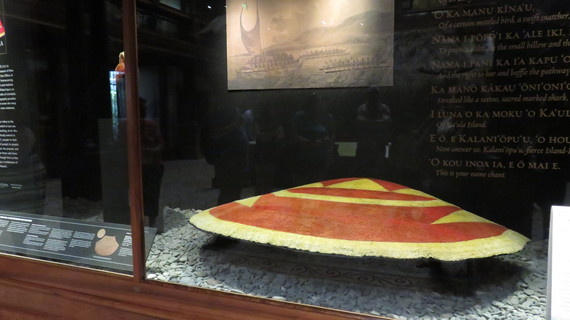 Standing in front of a glass display case at the Bishop Museum in Honolulu, HI, in April, the energy surrounding a new exhibit of great historical significance was palpable.

Despite the quiet of the museum, there were times I was convinced I could hear the distant chant of ancient Hawaiians, when in fact the only sounds to be heard were the clicking of cameras and the voice of our guide. Usually skeptical when it comes to the supernatural, I was surprised by the goose bumps I experienced gazing at the historic yellow and red feathered cape and helmet on display in front of me.

And apparently I'm not the only visitor to the museum to be affected by the display.
Kamana'opono Crabbe, chief executive officer of the Office of Hawaiian Affairs, was also visibly moved as he spoke about the day the exhibit opened to the public in March.

"People were lined up out the door," recalled Kamana'opono Crabbe. "They had travelled here from Maui, Kauai, all of the other islands and many of them brought offerings and performed personal chants once they got inside. It was very moving."


The treasured artifacts include the feathered cloak and helmet presented to English Captain James Cook in 1779, by Kalani'ōpu'u, the reigning chief of Hawai'i Island at the time. As a gesture of good will, Kalani'ōpu'u gave the 'ahu ʻula (feathered cloak) and mahiole (feathered helmet) he was wearing to Captain Cook, draping the cape over the explorer's shoulders after his ship made port in Kealakekua Bay. 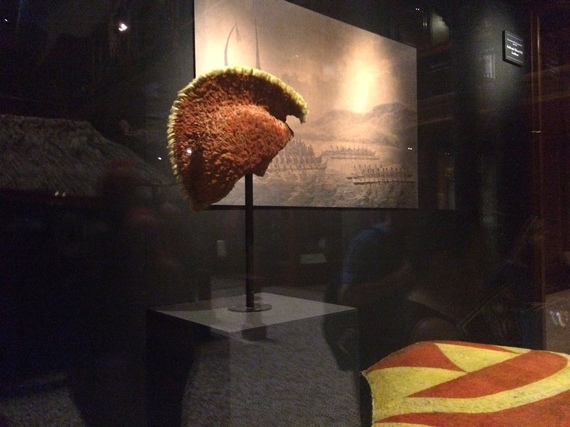 For native Hawaiians, the 'ahu 'ula, mahiole and all other featherworks were reserved exclusively for the use of their ali'i (royalty), symbolizing their chiefly divinity, rank and power. The construction of featherwork in ancient Hawai'i required an incredible amount of labor and craftsmanship - it's estimated this cape was made from the feathers of about 20,000 birds. At the time, skilled trappers caught the birds using various techniques, including snaring their prey midair with nets or using decoy birds to lure them onto branches coated with a sticky substance.

They often harvested only a few feathers from each bird before releasing them back into the wild so they could continue to produce more. Talented workers belonging to the aliʻi class crafted the olonā (flowering nettle) backing used as the foundation for the cloak, onto which the bundles of feathers were attached, creating bold designs.

After the cloak and helmet left the Hawaiian Islands on Cook's ship, they were taken to England and passed through the hands of various museum owners and collectors. The artifacts eventually ended up with Second Baron St. Oswald, who unexpectedly presented his entire collection in 1912, to the Dominion Museum in New Zealand, the predecessor of Te Papa Tongarewa. The cloak and helmet have been in New Zealand's national collection ever since.

In 2013, discussions began between Bishop Museum, Te Papa Tongarewa and the Office of Hawaiian Affairs to bring the artifacts back to Hawai'i, culminating in this significant homecoming. It's now the job of the Bishop Museum to care for these cultural treasures as part of an exhibit called He Nae Ākea: Bound Together, a name that reflects the connection of Kalaniʻōpuʻu to his land and people, the connection between the people, nation, and cultures throughout the centuries who have cared for these treasures, as well as the connection between the three institutions directly involved in this loan.

Our visit to the museum was part of a history and culture tour I was invited to take part in by Tourism Oahu with the goal to demonstrate there is much more to the beautiful island of Oahu than beaches. 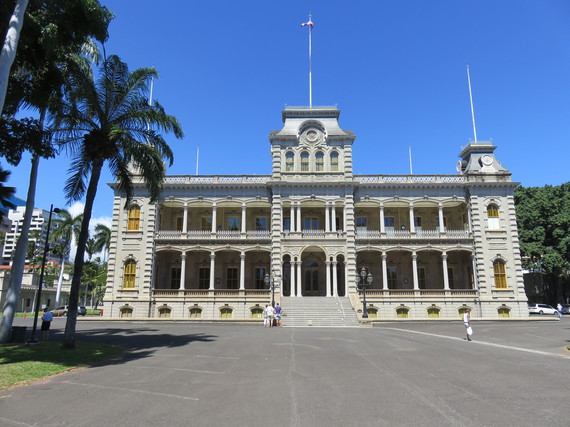 With that in mind, we also paid a visit to the Iolani Palace and our guide for the afternoon sang a traditional chant prior to us entering the historic building, which was commissioned by King David Kalakaua and completed in 1882. An earlier palace, known as Hale Alii (House of the Chief), was demolished in 1874.

What struck me most during our tour was hearing about the many tragedies and early deaths suffered by the early Hawaiian monarchy, as well as the negative effects settlement by Christian explorers had on the people of the Hawaiian Islands, particularly by introducing diseases to which they had no immunity.
It was also interesting to hear about King Kalakaua's interest in the modern amenities of the day, including indoor plumbing. The king also replaced the gas chandeliers installed when the palace was first built with electric lights just seven years after Thomas Edison invented the first incandescent light bulb. King Kalakaua also installed a modern communications system, which included the newly invented telephone.

Queen Lili'uokalani, who resided at Iolani Palace until the overthrow of the Hawaiian monarchy in 1893, was placed under house arrest in a small upstairs room in the palace by the Provisional Government of Hawai'i after the group assumed control of the palace and installed administrative offices. While under arrest, Queen Lili'uokalani and her companions sewed a colourful quilt dedicated to the monarch's family and the people of Hawaii, which is on display today in the "prison room." 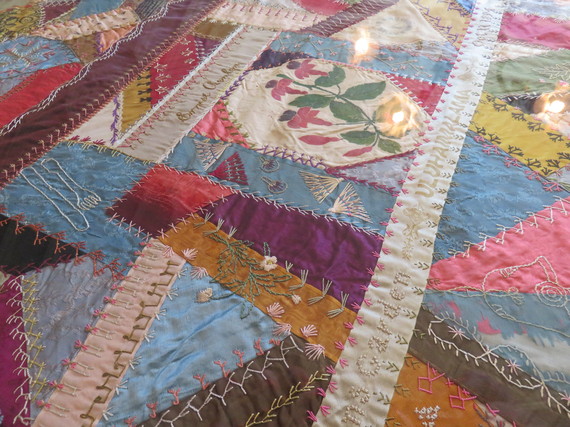 What's now known as the "Queen's Quilt," includes several stitched messages believed to have been created by Lili'uokalani herself, including, "Imprisoned at Iolani Palace ... We began the quilt here," "Queen's Garden" and "Oct. 11, 1894," the date a garden was planted in Pauoa Valley by her supporters. It's believed that what began as a small needlepoint project became a political statement with her imprisonment.

Much like the 'ahu ʻula and mahiole on display at the Bishop Museum, the quilt is considered one of the most significant artifacts in Hawaiian history.