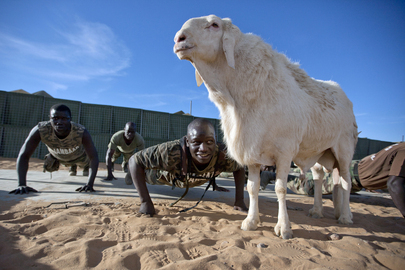 Observing the Muslim Eid by giving of myself especially at a time when too many innocent humans have been sacrificed by the vanity of political agendas.

From Muslim inhabitants in Myanmar, Ogaden, and the Central African Republic, to the broader populations of Syria, Iraq, and Ukraine, this has been a particularly bloody year. Journalists and humanitarian workers have been dealt with as a currency of war -- some of these giving and innocent persons have been sacrificed for public consumption on our new and old media. This Eid al-Adha (Kurban Kayram) I look forward to giving more of myself and not engaging in a tradition -- ritual of sacrificing of an animal.

It is a story shared by the Bible (Old Testament) and Quran, both Holy Scriptures to Muslims: God tests Abraham's willingness to sacrifice his son (Issac or Ishmael depending on the tradition). Ultimately Abraham sacrifices a black ram as God looks favorably upon both Abraham's and his son's obedience. The rituals during the time of the Second Temple performed by Jewish clergy were also full of blood sacrifice. However, as a Rabbi relayed to us during the Bar Mitzvah of a friend's son, Jewish ritual has taken on new traditions to focus on sacrifice of oneself to help the community, mankind, and one's commitment of harvesting knowledge. Blood rituals have though continued both within Abrahamic and non-Abrahamic traditions - many Jews and Muslims still observe ritual slaughter as consistent with Kosher and/or Halal, with the view that such is both more health conscious for the believers and more humane for the animal to be consumed, (killing for sport is considered sinful by many). See "Is Sport Hunting a Sin?"

Sharing of food with the poor and neighbors, as well as a reminder of God's mercy for those proving obedience is one of the major presumed purposes for the sacrifice of a sheep or cow, (or other Halal animal) on Eid al-Adha. Some Muslims call this the "Big Feast" because it is about community, celebration, and neighborliness.

Too Much Innocent Life Sacrificed: 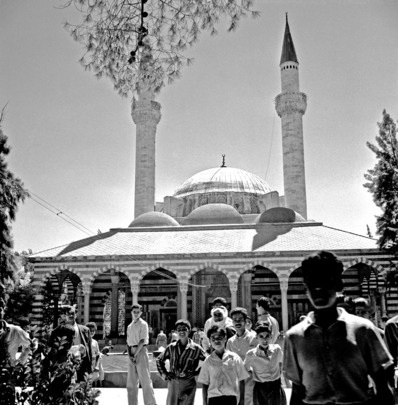 This Eid though may be unprecedented in how many innocents are to mourn, the killing of neighbors by neighbors, and the waging of genocidal conflict. More orphans are being created by the minute even as children and women are targeted. Some have stolen the name of "Islam" in order to commit horrific crimes inconsistent with this faith. Journalists and humanitarian workers (some also see that emergency workers with ambulances were targeted in Gaza) are sacrificed by "extremists" to shock the world. On the other hand, the world has become all too comfortably numb to the hunger and suffering of millions of refugees and victims of ethnic cleansing.

Current year's Eid al-Adha calls for a conversation among Muslims and all global citizens. We intend to prompt the global conscientiousness regarding the need to help the needy as well as confront those committing crimes against their fellow man and our shared earth. See: "Can UN Help Curb Climate Change and Its Consequences?" The image of more blood spilled, including of an innocent animal, may not be the best means to reinforce the message most needed now. We can help by donating food, medicines, shelter or even school supplies more efficiently to reach those in need.

Victims of genocide, particularly Bosnian Muslims, children and adults had their throats slit by ultra-nationalist Serbs who justified their killings in the name of Christianity. Some wanted to make the rivers of Bosnia & Herzegovina, "BiH," run red with Muslim blood. (Let us also not forget the innocent Norwegian teens systematically murdered by the self-proclaimed defender of Christian Europe, Anders Behring Breivik, who was inspired by such precedent in BiH.) Today's ISIS killers are not an isolated event only linked to Muslims but nonetheless as such pose the greatest threat Islam. See: "Confronting ISIS: Is Rule of Law & Democracy Part of Coalition?"

As a young boy, I had the privilege to perform the Hajj. It was one of the more spiritually and intellectually fulfilling moments in my life. The multi-racial and ethnic throngs all dressed in white performing peaceful rituals to remind of God and the unity of mankind and life still are a positive reminder in my adult life. However, one memory remains a blemish: the sheep ritually slaughtered by the roadside, some left to suffer while the meat of most remained not utilized. Such ritual that inflicted unnecessary suffering and waste I thought was inconsistent with the spiritualism of the Hajj and Islam.

Poaching for highly spurious reasons, particularly of elephants and rhinos, is one of today's greater sins in the manner it inflicts suffering, promotes waste and vanity, and threatens God's/Nature's bounty and diversity. The suffering of animals perhaps does not match that of a person in some people's eyes, but empathy is a universal virtue. The affliction of the animals in the Gaza zoo reminded me of a similar experience of animals and those who sought to save them during the siege of Sarajevo.

The plight of a whole city/state became symbolized by the plight of our animals. During the recent floods that spread through BiH, Croatia, and Serbia, perhaps surprising to some, former adversaries as well as neighbors became united in seeking to rescue companion and farm animals. Empathy spread from pets to fellow humans. (I have closely followed the efforts and writings of Serbian animal rights activist Stevan Zivkov and proudly count him as a social media friend even if do not always share the same view.) Similarly, cruelty to animals has been evidenced to spread into inhumanity toward fellow humans.

Some presumed animal welfare activists have focused all their attention on Jewish Kosher and Halal slaughter of animals. This is perceived by some as having racist, anti-Jewish or anti-Muslim overtones. Horrific treatment of animals occurs throughout our globe though, as the Yulin Dog Meat Festival where cats as well as dogs are boiled alive. In the US, chicken farms have been exposed of burying unwanted chicks/chickens alive. The Taiji Cove in Japan has become a tormented killing of intelligent mammal life including dolphins, but how different is that from the mammal slaughter festivals practiced in some Scandinavian countries? Do you know how "foie gras" is made? Is fur about warmth or fashion? All are in some form claimed to be part of a tradition, like bull fighting, where the animal suffers the consequences of our selfishness or narcissm. Think it would be much better if cultures and states compete in their empathy. See: "Do Animals Need a UN Ambassador?"

As one born into the Abrahamic tradition, I have come to see Eid al-Adha as a celebration of life, not death, and community and sharing of perspectives and commitment to knowledge. "Halal" also is reference to the humane treatment of an animal and not merely about the means of its slaughter.

By now some may conclude that this article is about animals and/or animal welfare. In part that is an element of our human responsibility, but it also affects our inter-human relations and spiritual welfare. Taking of any life should not be reduced to tradition as much as not to rote or mechanization. Our treatment of animals will increasingly affect our environment, (from poaching to greenhouse gasses produced by cattle farming), but also inter-human affairs and how we see each other. This is not a call to veganism but also no tradition should be assumed but reevaluated in the light of our times. Respect for life is the urgent call, a greater exercise in empathy by sacrificing of ourselves and more love for our shared earth. Eid al-Adha has come to symbolize a second chance at life offered by the blessings of a Supreme Being/Nature. This is a call for reflection, dialogue and tolerance of pluralism and diversity of views.

Sharing a Stage for Music, Traditions and Shared Vision of Future:

In BiH, "Bajram" is also a celebration of our pluralism where good deeds and views are shared with Muslim and non-Muslim neighbor. After the conflict in BiH ended, I worked with U2 to organize a concert in Sarajevo to celebrate the peace but also help fashion a new vision of a shared and tolerant future. We wanted the "opening acts" to reflect BiH's contribution to a new musical language of diplomacy. A multi-ethnic punk rock band won a radio contest and I selected another group of avant-garde musicians from Sarajevo, "Sikter" and "Protest." The most unusual performance on that rock stage though was the Gazi Husrev-begova Medresa Islamic Choir (male and female) which performed traditional Bosnian "inspirationals". Thanks to the vision and support of then Reisu-l-ulema Dr. Mustafa Ceric, we were also evidencing by actions that Islam and modernity could be on the same stage. Even after the trauma of conflict, siege and genocide, pluralism and tolerance were part of our greatest assets. The performance of the Choir from September 23, 1997 may be lost, but this is a more recent YouTube video of the Medresa Choir.

UN Photo/Albert Gonzalez Farran: Senegal (a Predominately Muslim Country) Peacekeepers believe having a sheep at the base is an ancient military tradition said to guarantee protection against any difficulties or threats.