"About Time" may have looked like a simple rom-com about time travel. It was not, however, and something we realized after weeping through the poetic beauty of the film's father-son love story. Richard Curtis' film got us thinking: What other movies have held the emotive power to make us not just tear up, but sob in uncontrolled heaves?

Here, we round up the most effective tear-inducing films ever, telling you, dear readers, why they made us cry all the tears. Read our editors' picks and tell us what movies left you sobbing in the comments below.

"Armageddon" "Armageddon" has me in tears every single damn time. It's really not hard to understand. Spoiler alert: Harry (Bruce Willis) sacrifices himself to save mankind by detonating a bomb on the asteroid that is spiraling toward Earth. Mostly, though, he does it so his daughter, Grace (Liv Tyler), can have shot at a life with A.J. (Ben Affleck). I repeat, he sacrifices himself so his daughter can be with the man she loves. There's a whole backstory about how he initially disapproves of the relationship, which makes everything even more emotional. Just try not to cry during the goodbye scene, when Harry tells Grace he won't be coming home. HEARTBREAKING. (Also: Aerosmith.) -- Stephanie Marcus 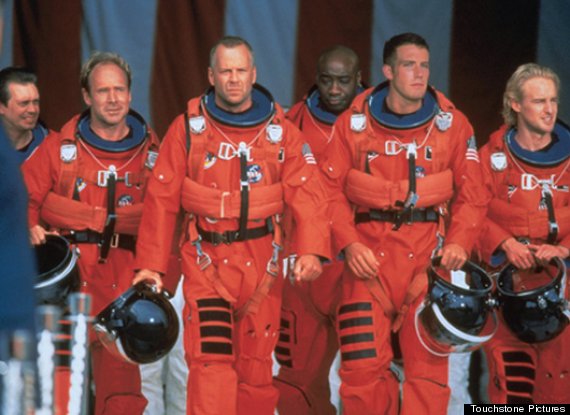 "A Walk To Remember" "A Walk To Remember" wrecked me, and not just because Mandy Moore looked like a pale, Puritan angel, as she slipped away in Landon's (Shane West) powerful arms. I was 11 years old at the time and I think my biggest problem was establishing the necessity of a midnight bed time. Maybe it was the realization that our existence is finite and love is transitory. Or maybe I was overwhelmed by my newly pubescent attraction to the god among men that Shane West was in 2002. Either way, I left that movie theater, clutching my Limited Too purse, determined to find a fellow fifth grader with whom I could forge a connection as real as the one Jamie and Landon shared. -- Lauren Duca

"Blue Valentine" There's no shortage of busted relationships in movies, but none is as authentic or heartrending as the one seen in Derek Cianfrance's acclaimed indie "Blue Valentine." The story, which pairs an unhappy pre-med student named Cindy (Michelle Williams) and a high school dropout named Dean (Ryan Gosling), chronicles the marriage they launch into upon discovering Cindy is pregnant. The vulnerable couple tries their damnedest to make it work, clinging to the spark that first ignited their kindred souls. But their sparring personalities render the relationship impossible, and watching them suffer through the agony of that revelation is like watching a beautiful swan disintegrate back into an ugly duckling. The film's final moments cement it as one of the most honest and sob-inducing portraits of human interaction seen onscreen. -- Matthew Jacobs 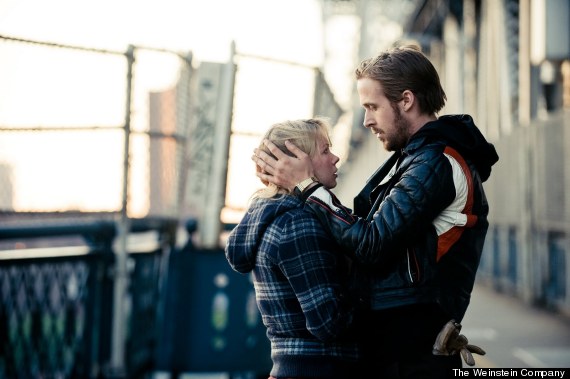 "Rudy" "Rudy's" effect on me is Pavlovian. (The score alone can bring forth the waterworks.) The ultimate underdog story of the last 25 years, "Rudy" stars Sean Astin ("Goonies" really do never say die) as Rudy, a diminutive good guy whose told by everyone, including his own family, to forget his lifelong dream: playing football for Notre Dame. (He's five-foot-nothing, a hundred-and-nothing, after all.) Long story short (pun), everyone is wrong, and thanks to a bunch of twists of fate, Rudy finally reaches his goal during the final game of his senior year. Just typing this is making me tear up. HIS DAD IS SO PROUD LOOK AT HIS BROTHER "WHO'S THE WILD MAN NOW?" Ugh. -- Christopher Rosen

"Stepmom" To be honest, I haven't watched the movie in years because I'm afraid of the waterworks that will flow when Jena Malone rejects cool-photographer-stepmom (Julia Roberts) in favor of dying-of-cancer-real-mom (Susan Sarandon). Released in 1998, this movie was prime Julia and Susan years, when sentimentality ruled and Ed Harris was hunky. But when the kids have to say goodbye to Susan's character, and when she finally accepts/ forgives Julia's character? I just can't. -- Jessica Goodman 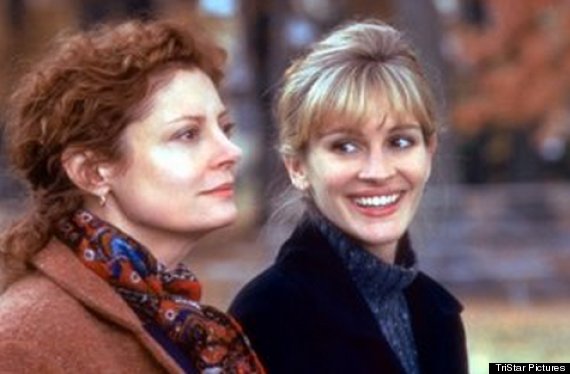 "Up" You sit down to watch an uplifting animated little Pixar gem, and no later than the opening credits you're bawling. The introductory montage of bright-eyed Carl and his adventurous wife, Ellie, as they go from painting their first mailbox to wrinkled, grey and saying goodbye to each other in a hospital room -- with their dreams of adventure never being realized -- is simply devastating. If you don't shed a tear for the pair who never got to put their penny jar to good use with a visit to Paradise Falls, you're not human. -- Kiki Von Glinow

"The Land Before Time" As a child, my cinematic intake revolved almost entirely around "The Land Before Time" series. While all 12 sequels are beautiful and necessary chapters of the history of dinosaurs, nothing strums my heartstrings quite like the original. The movie tees you up with the birth of Littlefoot -- the sole offspring of a diminishing herd of "Longnecks" -- a scene that will have you squirming with all the cute feelings. Then the "Sharptooth" comes in and ruins everything. As Littlefoot's mom lies on the ground in the pouring rain, and tells her son with her dying breath, "I'll be with you, even if you can't see me," all happiness in life ceases to exist. Between the five young protagonists' ability to bridge the castes of their ancestors, Diana Ross' "If We Hold on Together" and the magical BFF hilltop embrace at the end, this movie will always be my man-crying marathon. -- Ryan Kristobak

"I Am Love" Luca Guadagnino's 2009 film about an aristocratic Italian family could have been yet another study about a snooty set of society with too much money. Instead, told through the eyes of Tilda Swinton (outstanding as family matriarch Emma Recchi), the film swiftly and sometimes violently unravels in the name of love and sexual passion. The last 20 minutes are devastating. -- Youyoung Lee 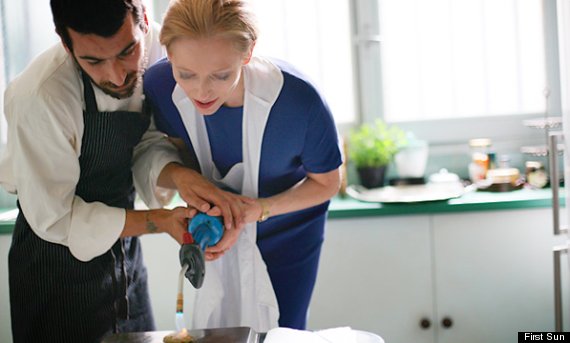 "The Green Mile" I first saw this movie when I was 17, and I completely fell in love with it. In addition to its valuable message about the death penalty, it really got the emotions going. I cried when Del bonded with his mouse Mr. Jingles, I sobbed when I found out John Coffey was innocent and every electric chair scene slayed me. Unfortunately, I cried so much that I'll absolutely never see "The Green Mile" again. -- Leigh Weingus 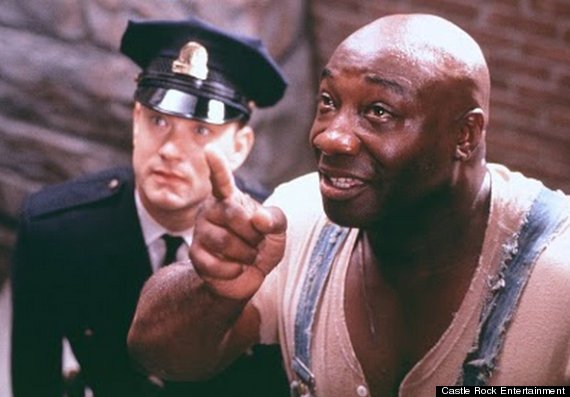 "Bridges Of Madison County" It was a hot summer’s day as I sat in the cold dark theatre at Lincoln Center watching a screening of “The Bridges of Madison County” as part of a Clint Eastwood retrospective. Though I was (as every human is) a huge Meryl Streep fan, this 1995 film (directed by Eastwood) had been off my radar until my friend Maggie came out of her room one day a year earlier, eyes swollen from crying and shoved the DVD in my hand.

Now here Maggie and I sat watching one of our now-favorite films on the big screen, and I knew the waterworks were coming. Was it my recent bad breakup? The heartwrenching score by Lennie Niehaus? The age-old theme of lost love? Probably all of the above. It doesn’t matter what set it off because there I was, sobbing into my arm through the final half hour of the film. From the moment when Francesca (Streep) takes a bath preparing for her romantic dinner with Robert (Clint Eastwood) to the famous scene when she almost leaves to be with him, to her children finding their mother’s mementos from that romantic weekend. It’s. All. Too. Much. If you ever need a good cry sob, watch this movie. It’ll get the job done. -- Christopher Rudolph

10 Movies That Will Make You Cry, Unless You Are A Secret Robot
They said WHAT? #nofilter